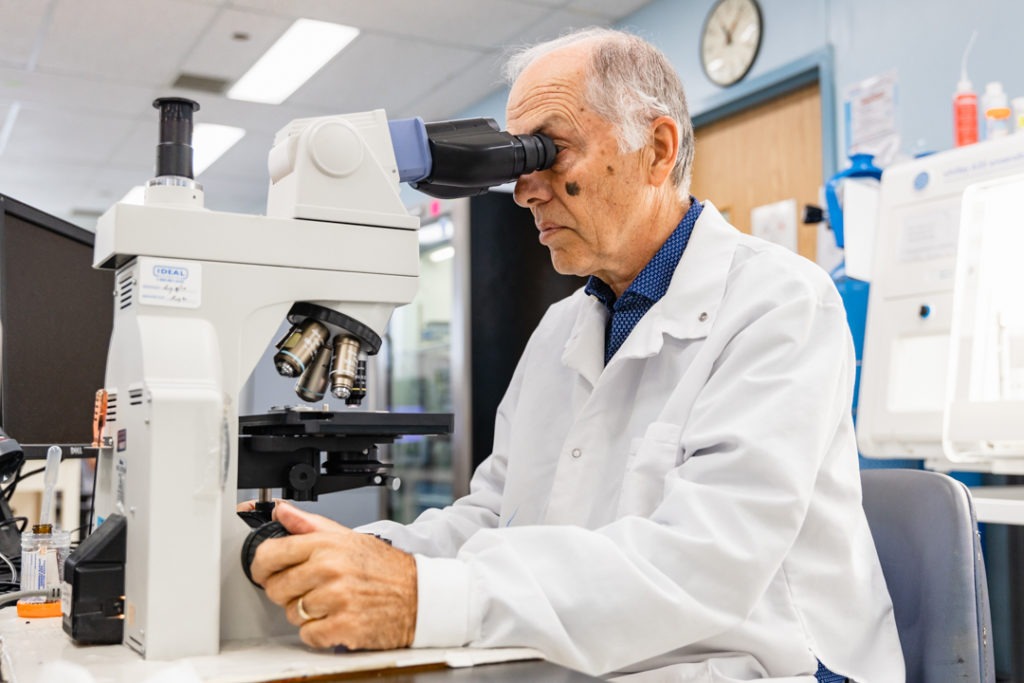 When John Korver first started working at Hamilton General Hospital in 1969, the lab was still in the Victoria St. Wing—a drafty old building that had been around since the late 1800s.

“When I walked into the General in 1969, people were smoking in the lab—working on specimens with a cigarette hanging out of their mouth,” he recalls. “In the winter, the frost would build up on the windows. And it was always dusty because the windows weren’t air tight.”

A lot has changed since then, except for John’s steadfast presence. He is now integrated manager of microbiology at the Hamilton Regional Laboratory Medicine Program (HRLMP). Over the course of his career, Hamilton General Hospital became part of Hamilton Health Sciences, and the lab he worked in became part of the HRLMP, a nationally regarded program shared by HHS and St. Joseph’s Healthcare Hamilton that services several other hospitals in our region. He says the joint lab has allowed everyone to pool their talents and serve our city and region better. This month, John is celebrating his 50 year career milestone. He, and several hundred other HHS employees are being feted for their long-term service on September 26th.

What makes someone stick around for 50 years?

When he shares his reflections on five decades in the lab, it’s easy to see why he’s stuck around so long. He is passionate about laboratory technology and welcoming to change. He has eagerly ushered in technological advancements that might have intimidated less eager folks. When asked about the biggest transformation he has experienced in his fifty year career, he enthusiastically explains the automation that has allowed the microbiology lab to process specimens more efficiently. He’ll gladly show you the WASP, which was installed at HGH in 2013. This machine prepares samples and discards any that don’t require further assessment, freeing up staff to focus on samples that require their analysis. They process more than 400,000 specimens each year. “We have had to pull together to innovate”

“The most exciting part of my career has been the opportunity to improve methodology and the technology we use in the lab,” he says. “We have had to pull together to innovate with limited funds. I have to give high marks to the staff I have worked with on that.”

No shortage of interesting specimens

Over the course of his career he has also noticed changes brought on by the global nature of our world. As air travel became easier, he and his colleagues began to see unfamiliar foreign pathogens, which piqued his interest. Antibiotic resistance also increased, spurring new strains of bacteria. 50-years in, he continues to be fascinated by the interesting pathogens that come through his lab.

In addition to his passion for microbiology, a desire to give back to a healthcare system that saved his life has kept him going all these years.

“I owe the healthcare system something, and that’s one of the reasons I’ve stayed all these years,” he says.

He was treated at St. Joseph’s Healthcare Hamilton in the 1970s for a tumour on his esophagus. In the 1990s, he had another surgery at Henderson Hospital (now Juravinski Hospital and Cancer Centre).

John is proud of his five decade long career, and is almost ready to call it quits. He plans to retire at the end of the fiscal year to enjoy more time with his wife (they also celebrated 50 years married this month) and his grandchildren. Hamilton Health Sciences | @Karen__Moffat - April 11
🎉🥳Happy Med Lab Week to my colleagues, professional and clinical staff and mentors that I have been honoured to wor… https://t.co/EZwHn8vnwd