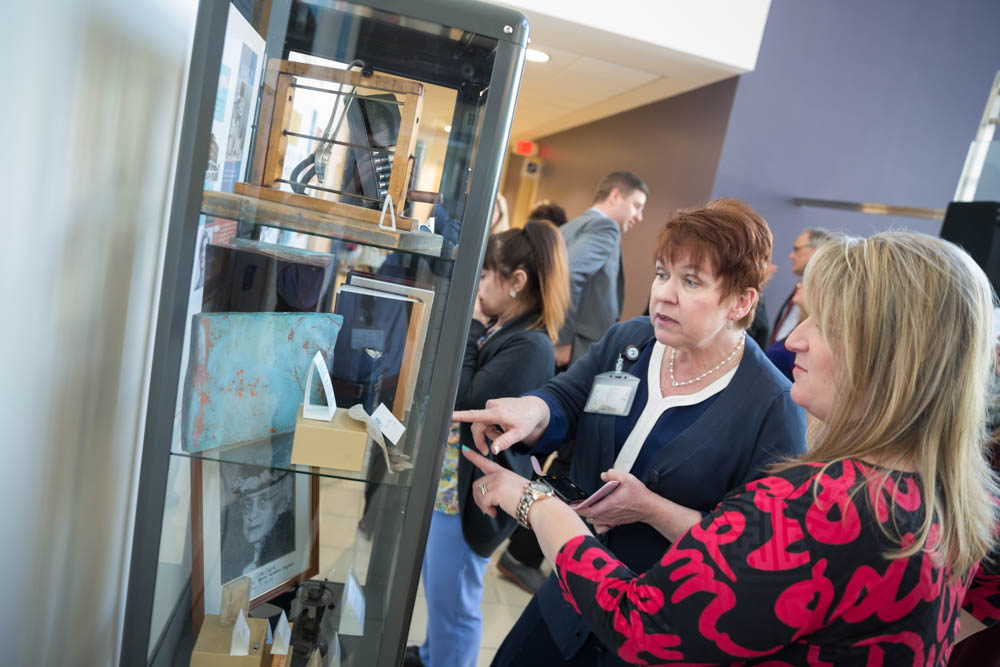 Juravinski Hospital and Cancer Centre is celebrating a special milestone this month—the site has been home to a hospital for 100 years.

In April 1917, the first hospital on the Hamilton mountain opened its doors. It was named Mount Hamilton Hospital and was built to care for veterans returning sick and wounded from war. In the years since, the site has experienced several evolutions.

In 1954, a convalescent hospital was added to the site, named after Nora Frances Henderson, the first woman in Canada elected to municipal office. Eight years later, Mount Hamilton and the Nora Frances Henderson Convalescent Hospital joined Hamilton General Hospital to form the Hamilton Civic Hospitals. In the 1960s, the Ontario Cancer Treatment and Research Foundation moved the Hamilton Cancer Clinic up the mountain to the Henderson, establishing a site as a key player in cancer care in the province. In 1987, the Hamilton Civic Hospitals Research Centre was established at the hospital, and played a significant role in keeping the site open for service. In 1997, the Henderson amalgamated with the Chedoke-McMaster Hospitals to form Hamilton Health Sciences. In 2010, the site was renamed Juravinski Hospital and Cancer Centre after major redevelopment, supported by a generous donation from Charles and Margaret Juravinski.

“It’s important for us to celebrate this milestone and we look forward to continuing to recognize it throughout the year.”

These significant events, and others, are included in a commemorative display that was unveiled in the hospital lobby Monday morning. The colourful timeline includes vintage photos from the hospital’s history and is flanked by curios displaying artifacts from its various eras. These include a time capsule that was placed in the cornerstone of Mount Hamilton Hospital when construction began in 1915, and the identification badge given to Nora Frances Henderson when the Hamilton Civic Hospitals organization was formed. “It’s important for us to celebrate this milestone and we look forward to continuing to recognize it throughout the year,” remarked Dr. Ralph Meyer, Vice President, Oncology and Palliative Care at Hamilton Health Sciences at a celebration to unveil the display.

The timeline will be on show on Level 1 of Juravinski Hospital beside the B elevators for several months. Hospital staff, physicians, patients and visitors are encouraged to enjoy viewing the artifacts that shaped health care in Hamilton. 100 years of health care on the mountain brow

1917– The first building of Mount Hamilton Hospital, a 100 bed veterans hospital, opens on a 17-acre plot of land on the Hamilton escarpment.

1932– A maternity hospital is built on the same site, but because of the economic depression, there is no money left to furnish it. It finally opens for service in 1938.

1957– A premature infant nursery opens at Mount Hamilton Hospital, deemed the ‘most modern in Canada.’

1968– Ultrasound technology replaces X-ray as the preferred method of examination for pregnancies and other medical conditions.

1971– Husbands are allowed to accompany their wives into the delivery room.

1976– A Celltrifuge, a device that divides blood into its various components for leukemia treatment, is installed at Henderson General Hospital.

1985– The Canadian Cancer Society opens Lakeview Lodge adjacent to the hospital property to provide overnight accommodation to out-of-town patients being treated for cancer.

1989– Henderson General Hospital becomes a non-smoking facility. Smoking by patients and staff is only permitted in designated areas.

1997– The Hamilton Regional Cancer Centre Foundation is formed to fundraise for and manage donor gifts to the Centre. It later amalgamates with the Hamilton Health Sciences Foundation.

2005– Juravinski Cancer Centre is expanded to accommodate more patients and reduce wait times. Six radiation units are added and the chemotherapy suite is expanded from 27 patient spaces to 41.

2009– The Juravinski Cancer Centre begins operation of Ontario’s first CyberKnife machine, funded by support from donors. The machine is the world’s first robotic radiosurgery system, designed to treat tumors anywhere in the body with precise accuracy.

2014– The CIBC Breast Assessment Centre opens as a specialized site for breast cancer screening, assessment and genetic testing. It is funded by $5 million in donations through the Hamilton Health Sciences Foundation.

2016 – Juravinski Hospital & Cancer Centre receives the first stage of Ministry approval to expand its stem cell therapy program, which will create a new 15 bed inpatient unit, and expand oncology day services and pharmacy services. Completion of the expansion is scheduled for 2018. Hamilton Health Sciences Foundation is currently fundraising for this project.