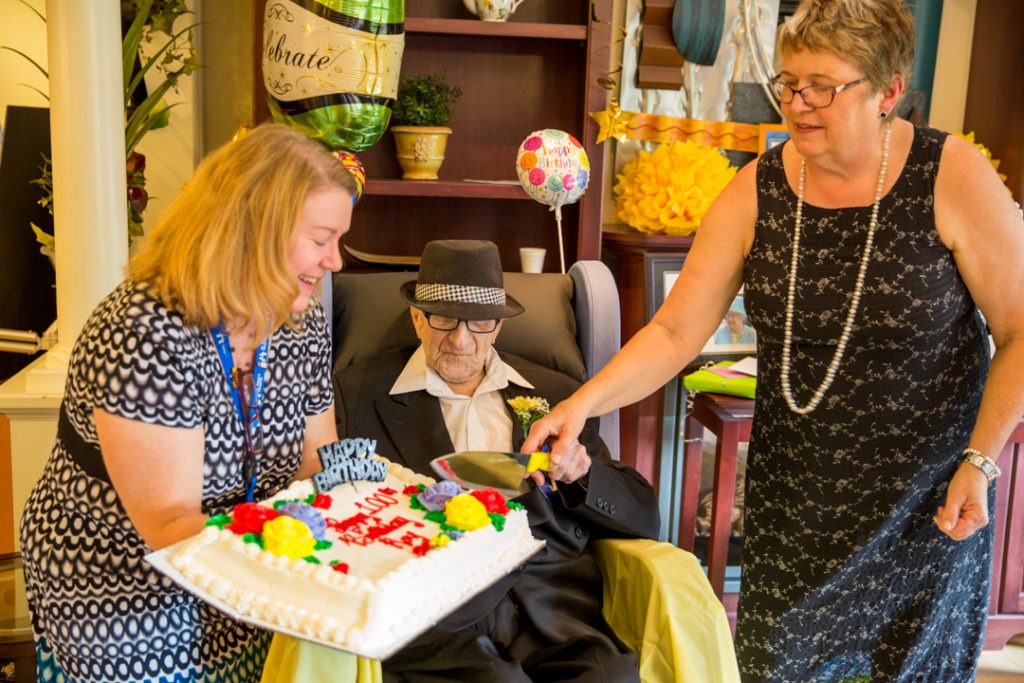 Roy Thompson’s friends always joked that he would outlive them all. His mother lived to 99, so he knew he was bred for longevity. But the reality of joining the century club never really sunk in until he arrived at St. Peter’s Hospital.

A year-and-a-half ago, at age 98, Thompson got a bad bout of pneumonia. He was taken to Hamilton General Hospital for treatment and was soon transferred to the Palliative Care Program at St. Peter’s Hospital (SPH), where he began winning over staff with his old fashioned charm and expertly woven stories.

“He’s a wonderful patient,” says his nurse, Ashley Fougere. “I look forward to seeing him every day.” For a while, staff at SPH worried he would fall just short of 100 years. A few months ago, his health declined and he was becoming unresponsive. They feared they were going to lose their beloved Roy. But he rebounded and was soon back to charming the pants off everyone around him. As he recovered, he became more determined than ever to reach 100.

Thompson was born in Manitoba and left home before he turned 16. He travelled to Miami, Florida, started working as a waiter and never left.

It was there that he met the love of his life, Jenny. They had two children, but never married since Thompson was in the country illegally and couldn’t draw attention to himself. Unfortunately, his status caught up with him eventually and he was jailed on three separate occasions for living illegally in the U.S. After his third stint—it lasted two years—he decided he couldn’t risk it again and returned to Canada, leaving his beloved family behind.

Thompson has countless more stories from his 100 years: catering parties for Al Capone in Miami, mixing cocktails for Canada’s military elite in the ‘officer’s mess,’ playing endless rounds of bingo in downtown Hamilton.

He has lived a life suited to celebration, and given his taste for fine food and drink, it was only natural for him to dig right into planning when Kim Morgan, a therapeutic recreationist at SPH proposed the idea for a 100th birthday celebration. Morgan says the planning process brought Roy back to the days when he worked in hospitality. “I really was just his assistant party planner and his legs ordering and picking things up,” she says. “With the assistance Fougere, and Peter Davis, another of his nurses, we arranged the food exactly as he requested. He chose his favourite colour for the vases of carnations, candles and napkins, and I followed through with decorations and balloons.”

Some of Roy’s birthday requests were unsurprising. He wanted pizza for his fellow residents and someone to hammer out good old fashioned tunes on the keyboard. Others were subtle hints at a life lived just as he likes it. Lots of dill pickles. A freshly pressed black suit and a fedora. Placards highlighting the milestones he has lived through in his 100 years on earth.

“His grand entrance to a very packed room, waving and smiling confirmed without a doubt that this was all very much worth it.”

After spending over a year lying in bed, Thompson began working with his physiotherapist, Michelle Shilton, and occupational therapist, Pat McMahon to improve his stamina for the party. They coaxed him to sit up in bed for a few minutes each day. By his birthday, he was up in a chair to celebrate, and show off his formal duds. Morgan says he was just radiating with joy when he entered the party. “His grand entrance to a very packed room, waving and smiling confirmed without a doubt that this was all very much worth it,” she says, “for Roy and all who were privileged to be present.”

“It was exciting and different,” he says with a wink. “I’m so glad I got up.”

Thompson can’t express enough gratitude to everyone who helped him turn 100 in style. But he is even more thankful for their help in making sure he lived to celebrate this very special birthday. Now that he has, he feels certain that he’s got at least one more left in him.