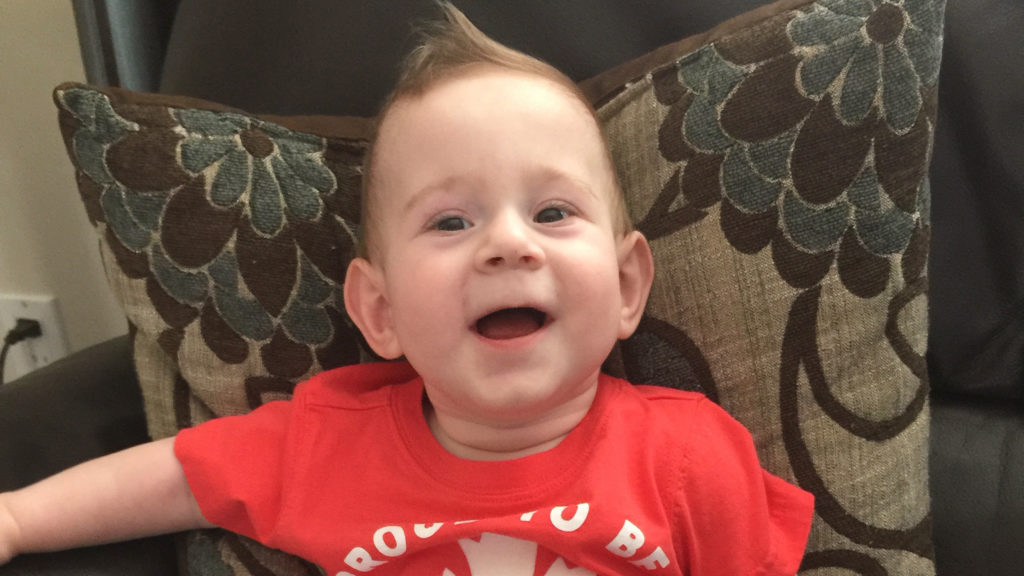 For Lana and Mark of Welland, the birth of their son Grayson was fraught with difficulties from the outset. Lana was rushed to McMaster Children’s Hospital on July 27, 2014, after being diagnosed with preeclampsia, a pregnancy complication characterized by high blood pressure that increases the chances of poor outcomes for the mother and the baby.

“Everything was happening so fast,” recalls Lana. “It was one of the scariest moments of my life and everything felt surreal.”

Grayson was born five days later on August 1, 2014 via emergency C-section. Only 26 weeks along, he weighed 1 pound, 13 ounces. He was also suffering from respiratory distress syndrome, which resulted in difficulties breathing, so he was intubated and put on a ventilator for the first two months of his life.

“It was heartbreaking to see our son Grayson facing so many struggles right off the bat,” says Mark. “Unfortunately, even more serious roadblocks were to come.”

Another detour on the road to health

An additional medical challenge was discovered – volvulus, or an obstruction of the intestine caused by twisting. Grayson would have four major surgeries to correct the condition. As his stomach needed to be closed off during this time, the teams at McMaster Children’s Hospital used innovative techniques to ensure that Grayson received the necessary nutrients directly into his digestive tract via a feeding tube.

“We received an amazing level of care and support at McMaster Children’s Hospital during such a stressful time,” says Lana.

Grayson stayed in the Neonatal Intensive Care Unit for 271 days and was discharged on April 28, 2015. After nine long months, the first-time parents were finally able to bring their son home.

Thanks to the care he received at McMaster Children’s Hospital, Grayson is now a healthy and active toddler who looks forward to exciting new adventures every day.

“I think it’s important for the community to support McMaster Children’s Hospital Foundation because it helps patients like Grayson receive the best care possible,” says Mark.

This holiday season, please give the greatest gift of all – the Gift of Health – to Hamilton Health Sciences Foundation. To see your impact unwrapped and learn how donor gifts are making a difference, or to make a donation, please visit www.giftofhealth.ca or call 905-522-3863.