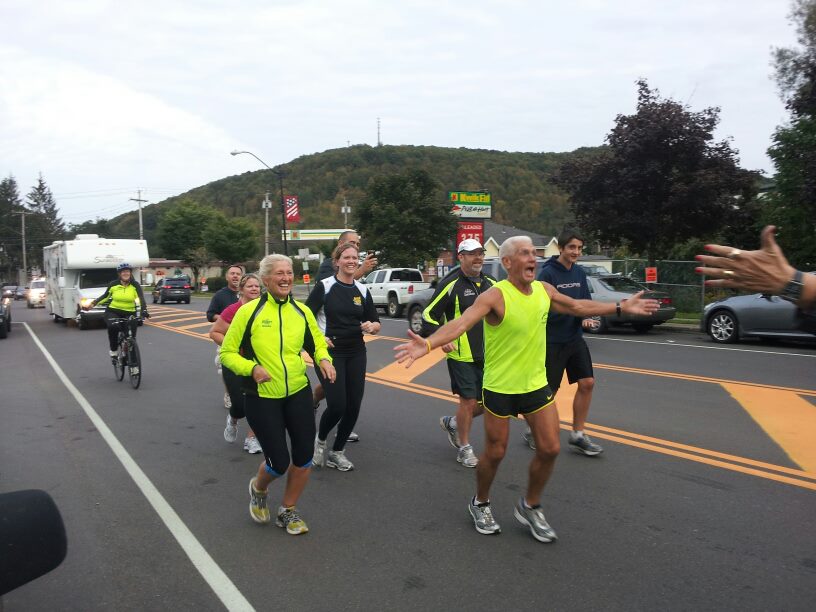 Crossing the finish line with a quadruple bypass

It takes a lot of heart to run like Doug Flis. He has completed dozens of marathons—his fastest in 2:44. He’s qualified for the Boston Marathon thirteen times. He has run over 100 miles from Grimsby to Ellicottville.

But in 2014, his favourite sport started to feel different. He was tiring after jogging only a mile. He could no longer keep pace for the members he coaches in his club, Grimsby Runners. His heart didn’t hurt, but it felt as if someone was pushing down on his chest. He started to take it easy, unsure of the reason behind his newfound limitations.

“They kept me in the hospital, and I was scheduled for emergency surgery.”

“I knew something was wrong,” Flis says. “I was really tired and that’s just not me.”

He started looking for answers, and was eventually referred for a stress test at his local hospital. His suspicions were confirmed. Something was up, but doctors couldn’t pinpoint the source just yet.

Powering through diagnoses and procedures

“I was sent for a perfusion test to see how well my blood was flowing, and they found a blockage,” Flis recalls. “They made an appointment for me to have an angiogram at Hamilton General Hospital. I got called in for a cancellation, and they ended up finding five blockages.”

Flis remembers being told how lucky he was to have come in for the cancellation because his heart could have stopped at any moment.

“They kept me in the hospital, and I was scheduled for emergency surgery.” “All of his blockages were very severe,” says Dr. Dyub. “It is very lucky that he went in for the stress test and ended up being sent to us.”

Dyub says that a family history of heart disease was Flis’ only risk factor. “The fact that he was so fit, ate healthily and didn’t smoke may have protected him from needing surgery earlier. When you exercise often, your heart forms micro-channels that act as a sort of alternate route around blockages in main arteries. Flis’ heart may have been relying on these for a number of years.”

Flis required a follow-up surgery to have a stent put in. After that procedure, he was eager to return to running, but knew he had to build up his stamina.

The steps to a full recovery

“Your body will dictate what you can do after recovery,” Dr. Dyub says. “You can go back to your previous life—an even healthier version of your previous life—you just have to take time getting there. For Doug, this meant returning to running.”

Flis has continued see his cardiologist, Dr. Koon Teo, for routine follow up appointments at HGH.

“He knows that with his history and findings he needs monitoring,” Dr. Teo says. “He has agreed to watch his diet more carefully in order to prevent cholesterol build up. He also gets periodic tests and most importantly, knows that if the chest symptoms recur, he should listen to his body and get medical advice.”

When he had fully recovered, Flis started walking, then running short distances. He continued to coach his Grimsby Runners clients, helping many of them towards their first marathon. He built up his stamina, and it wasn’t too long before he was back to rising at 5a.m., and coaching three or four runners each day. Eventually, he felt ready to return to the starting line himself. In the fall of 2016, he ran his 76th marathon—his first since having a quadruple bypass.

“I’m proud I did this,” says Doug. “I want people to know that everyone can be active. You just have to set your own goals and work towards them.”