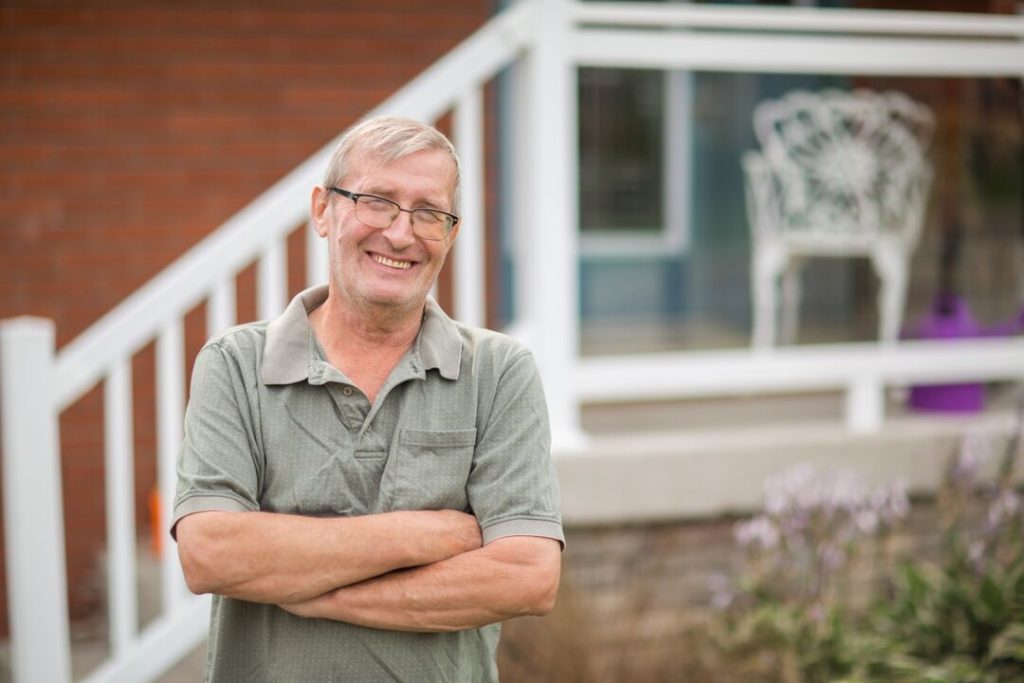 This summer, he landed in the Juravinski Hospital & Cancer Centre (JHCC) emergency department, experiencing severe pain in his belly. In the minutes and hours that followed, dozens of quick decisions and heroic actions lined up just so to save his life.

Dr. Teresa Chan had just begun her night shift that day when Eszter Bakai, the triage nurse, flagged her down. There was a patient she needed to see right away. He looked very ill.

“Sometimes you can just tell when someone is that sick,” Dr. Chan recalls. “I suspected he had an abdominal aortic aneurysm.”

An abdominal aortic aneurysm, known as a AAA, is an enlarged portion of the body’s largest blood vessel, the aorta. The vessel stretches, causing its walls to become weakened, and putting it at risk of bursting. A rupture can be fatal.

“I asked Jack if we could do an ultrasound immediately and we brought a portable ultrasound machine into the hallway and examined him right there,” recounts Dr. Chan. “We found a AAA about the size of a baby’s head. And I said ‘I think he’s rupturing!’”

“they told me I had flatlined for about two minutes”

He was sent for a CT scan, which confirmed that his AAA was, in fact, in the process of bursting. He was at risk of losing a deadly amount of blood. Dr. Chan immediately called together a team of multidisciplinary experts to stabilize him and prepare him for surgery. From nurses to administrators to doctors and surgeons, they rallied together to make sure that Jack got the care he needed.

“Everyone rolled up their sleeves, got on phones, and helped arrange the operating rooms. Chris, the charge nurse on duty that night did an amazing job, helping to galvanize the team and even ran to deliver blood when the patient’s blood pressure dropped in Diagnostic Imaging.”

The anesthetist on-call, Dr. Alena Skrinskas and the vascular surgeon on-call, Dr. Vikram Iyer, drove up to JHCC in record time for emergency surgery. By this point, Jack had lost his pulse and the team was performing CPR.

“By the time I arrived, he had no blood pressure,” recalls Dr. Iyer. “It’s not common that people survive this.”

Jack was rolled into the operating room as Dr. English, an emergency physician who stayed late to assist, continued to perform CPR and Dr. Skrinskas continued to lead the team in the resuscitation. The team was able to stabilize him, and Dr. Iyer immediately repaired the rupture in his aorta.

Jack’s memory of the experience is foggy, but he recalls learning just how lucky he is to be alive. “I woke up in the recovery room after the operation, and they told me I had flatlined for about two minutes. I was shocked.”

Dr. Iyer says that if Jack’s aneurysm had been discovered earlier, it wouldn’t have grown to such a dangerous size. He and Jack hope that by sharing this experience, others will be more aware of their own risk.

“There are a number of factors that put people at greater risk for a AAA,” says Dr. Iyer. “White men over the age of 65 are at greatest risk, especially smokers. I hope that by hearing about this, people will ask their doctor whether they need to get checked.” With early detection, vascular surgeons like Dr. Iyer can monitor AAAs and intervene prior to emergencies like the one Jack experienced. Jack has had a remarkable recovery. Within a couple days he was sitting up in bed, laughing and joking with his care team. He was quickly transitioned from the Intensive Care Unit at the Juravinski to the Vascular Step Down unit at the Hamilton General Hospital.

“I was so well taken care of. Even if I had put in a special order, I don’t think I could have gotten better people than what I’ve had for my care. Both at Juravinski and the General.”

He’s back to mowing the lawn, washing his car, and tinkering with scale models. He’s been through a lot. But knowing he can’t go back and prevent his rupture, he’s just glad he was in the right hands when it happened.