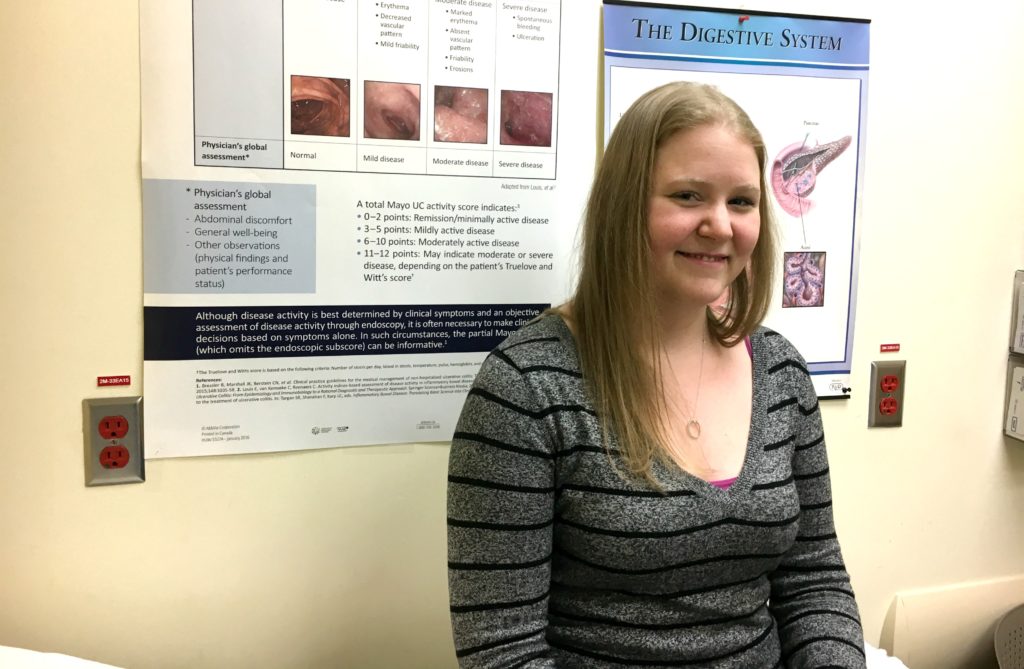 Opting for an ostomy: a young woman’s journey with Crohn’s

Losing hope in the system

Abby Colling has had a long and challenging journey with Crohn’s disease. She was diagnosed at age 16, and for years tried many different medical and natural treatments that proved unsuccessful. She began to lose hope that her disease could be managed effectively. She became jaded with the health care system, and eventually stopped seeking professional help.

Unfortunately, her disease continued to progress. Though she was registered as a patient at McMaster University Medical Centre’s (MUMC) Adult Digestive Disease Clinic, she had stopped taking medication and attending appointments. Colling’s older sister, who has Ulcerative Colitis, was receiving treatment at the clinic from nurse practitioner (NP), Usha Chauhan, and it was going very well. The clinic has a special program where patients are followed closely by a NP who helps manage the different elements of their care. Empowered by her sister’s positive experience, Colling, returned to the clinic for a visit with Chauhan.

“That’s what started me on a path to taking care of my mental health. Before I was really hesitant to ask for help.”

“She’s made such a difference to me,” Colling says. “I’m not sure I would have taken care of myself without her support.”

Back on the road to better health Under Chauhan’s care, Colling saw a psychiatrist at the clinic and was diagnosed with depression.

“That’s what started me on a path to taking care of my mental health,” Colling notes. “Before I was really hesitant to ask for help.”

Taking care of her mental health allowed her to take care of her physical health as well. She met with her family doctor and learned more about the risks and benefits of a class of medications called biologics that Chauhan and her doctor at the MUMC clinic had recommended. Biologics target a specific part of the immune system. Colling decided to start on the medication, but despite her renewed optimism, her disease was still not responding to treatment. She tried four different biologic therapies, and her body had little or no response to them. She continued to suffer from ongoing inflammation of her bowel. She was exhausted all the time and experienced side-effects of steroid therapy. The only remaining option was surgery to remove part of her bowel.

“She had really come a long way and was dedicated to taking care of her health,” Chauhan recalls. “Still, an ostomy is life-changing and that is difficult to accept, especially for a young person.”

An ostomy is a surgical opening made in the abdomen where part of the bowel is brought to the surface of the tummy. The body’s waste products move through this opening and a pouch is worn outside the body to collect them. For Colling, it would mean freedom from the pain and frustration caused by inflammation of the bowel. But this procedure is life changing, and living with an ostomy can be difficult. Before her surgery, Chauhan connected Colling with three patients at the clinic who have gone through the procedure, so she could get comfortable with the idea.

“You know when you go running with weights on your ankles and then get home and take them off? That is what this was like.”

“Abby discussed her concerns and was able to ask them questions,” Chauhan says. “She got an overall picture of coping and living with an ostomy. I think it’s important to develop an alternate care pathway when a patient feels frustrated with conventional care. Creating a peer-to-peer network can be very helpful for patients.”

Relief after 12 years of pain

Colling, now 28, went through with the procedure and is incredibly glad she did.

“You know when you go running with weights on your ankles and then get home and take them off?” she asks. “That is what this was like. Instead of feeling like my ostomy is a burden, it’s like a huge weight has been lifted off of me.”

Unburdened from constant trips to the washroom, unbearable pain and the disappointment that comes from failed treatment, Colling has been able to resume activities that she’d missed for years.

“When people think of an ostomy, they think of what gets harder. I think about what I can do now that I’m not dealing with the effects of my Crohn’s disease. Sure, I have to clean it, but that is nothing compared to pain and constantly needing to be near a washroom. I’m really excited to go camping and to travel.”

Crohn’s disease is a life long condition which can occur in any part of the gastrointestinal tract. Having part of her bowel removed does not mean she is free from her Crohn’s disease. Colling still needs to be vigilant and continue with medical therapy.

But she is glad to be enjoying life after struggling for years to manage her disease. She believes meeting with other patients who have an ostomy helped shape her positive attitude about the procedure. Chauhan is glad to see her healthy and coping well. One day soon, she may be on the giving end of peer-to-peer support.