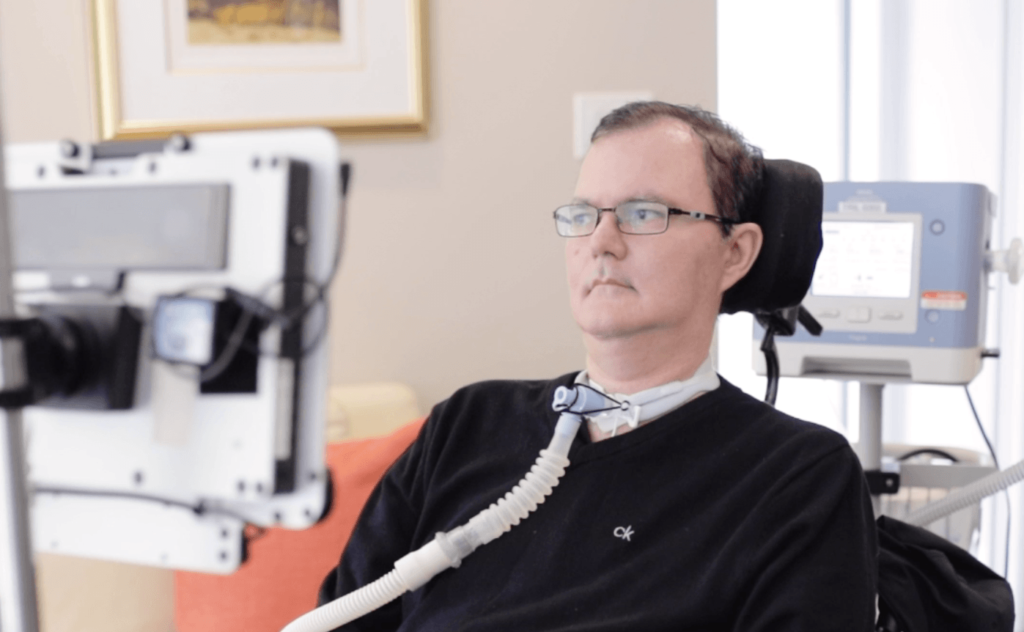 Dr. Jeff Sutherland just published his first book. Writing a 200-page memoir would be an accomplishment for anyone, but for Jeff, it is a remarkable feat. He wrote each and every word using only his eyes.

Twelve years ago, Jeff was a well-respected family physician with a thriving practice. Then he got what he calls the worst diagnosis imaginable—and he would know; he had given plenty of bad news to his own patients.

“My greatest fear was realized when I was diagnosed with ALS at the age of 41,” he says.

ALS, short for Amyotrophic Lateral Sclerosis, is a progressive disease that slowly robs people of their functions. They lose their ability to walk, talk, chew, and even breathe. It gradually paralyzes people because their brain is no longer able to communicate with the muscles in their body.

As Jeff’s disease progressed, he realized he was going to need a different way to communicate. It was becoming more and more difficult to talk, so he connected with the Technology Access Clinic at Hamilton Health Sciences.

The TAC helps patients who can’t speak or write in traditional ways. They use different tools and technology to help people express themselves. Jeff began with a voice amplifier. When his voice disappeared, he used a roller ball, then a joy stick to swipe through letters and words on a screen. Then he lost use of his hands, and had to find another way to communicate.

when you have no other choice, it is a life saving treatment

“Jeff started using eye tracking technology several years ago,” says Kim Carey, his occupational therapist in the TAC. “His device emits light which reflects off his pupils. Those reflections are then tracked using a camera. The device translates the movement of the pupil into the movement of the cursor on screen.”

Kim has been working with Jeff for nearly a decade. When she learned he wanted to write a book, she was confident he would follow through, despite the painstaking effort it would take.

Turning tragedy into inspiration for others

Jeff’s book, Still Life, is about resilience in the face of tragedy and seemingly insurmountable obstacles. Three years ago, his son Zach and his girlfriend died in a kayaking accident. The horrible event forced Jeff to confront his grief. He began to process the loss of his son, and the loss of control of his body. He says the writing process helped him move forward.

“Speaking and writing with an eye tracking computer is the ultimate test of patience,” he says. “But when you have no other choice, it is a life saving treatment.”

Jeff spent well over 1000 hours editing Still Life. Each minor change required him to carefully mouse around his computer using tiny eye movements. He jokes that when his wife, Darlene, would suggest an edit, he’d roll his eyes to ask if it was really necessary. The book is a labour of love that he is proud to leave behind for his family, and anyone seeking comfort and inspiration after loss.

“I hope that other people who have had loss and even tragedy can eventually find peace and joy in their lives,” says Jeff.

Hamilton Health Sciences | @RobMacIsaac - December 9
Research is an essential component of the health care work that happens in our organization. Discoveries by our tea… https://t.co/6dbF09gMKk
Ways to Give