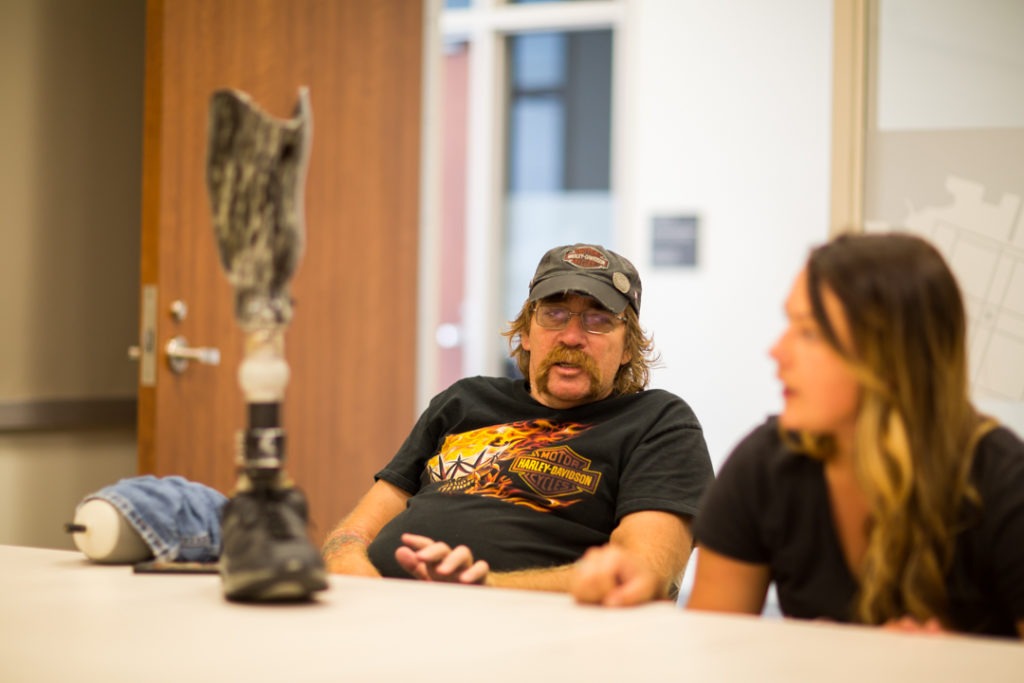 After amputation: peer support beyond rehab

He calls it ‘AA for amputees.’ When Don Prescott started the support group a year and a half ago, his goal was to help people like himself navigate the new reality they shared. He’s done much more than that.

In spring 2013, then 66-year old Prescott got an infection in his toe that wouldn’t go away. He was given antibiotics but they weren’t working, and eventually he had to make the difficult decision to have his leg amputated. For many people, the prospect of recovering from this life changing procedure would be disheartening. He saw it as a challenge. “I was excited about it,” he says. “I was excited to get out of the wheelchair and see what I could do.”

“I wanted to help people feel connected, and give them a place to figure out the less expected parts of being an amputee.”

Prescott’s surgery took place at Joseph Brant Hospital in Burlington. A few months later, when his stump had healed sufficiently, he met with Dr. Sharon Grad, medical director of the Amputee Rehabilitation Program (ARP) at Hamilton Health Sciences (HHS). “Don did extremely well in our program,” says Grad. “His positive attitude and motivation helped him to learn the skills necessary to function well at home and in the community.” Relearning for a new life

He was fitted with a custom prosthetic leg in HHS’ Prosthetics and Orthotics Department, and soon after began treatment at the Regional Rehabilitation Centre.

“Dr. Grad always called me her posterboy,” Prescott says. “It went very well.” With help from a multidisciplinary team, he learned to climb stairs, transfer in and out of bed, and take care of his prosthesis. His transition into life with a prosthetic leg was surprisingly smooth. “The work of this amazing team made the process so easy,” he says. “We are so fortunate to have a program like this in our area. It made me want to give back.”

Helping others find their footing beyond rehab

Prescott signed up to be a peer support mentor with the ARP, and went through specialized certification training. Once a week, he volunteers at the Centre, guiding new patients through registration and helping them get acquainted with their new surroundings. But he wanted to do something more. He knew how hard it was transitioning out of the program and back to normal life. He wanted to help other amputees navigate the challenges you don’t encounter in a hospital setting. “You have no real connection with other amputees after leaving the program,” Prescott says, “I wanted to help people feel connected, and give them a place to figure out the less expected parts of being an amputee.”

“Don’s input is invaluable,” says Grad. “He is a very important part of our team. He volunteers his time freely and is always willing to reach out to one of my patients when they are in need of peer support. He is an wonderful role model.”

Prescott says the group has been a great source of information and support for recent amputees. “A lot of them want to listen and ask questions about how you overcame this or that.”

“We try to look forward to what we can do again now.”

Each month, between 10-20 people gather to ask questions and share ideas. They talk about everything from finding accessible parking to the kind of clothes that are easy to wear over a prosthesis. Prescott, their fearless leader, encourages them to step outside their comfort zone as amputees. This summer, he took a few members of the group—all of whom hadn’t golfed in years—to a golf tournament.

By supporting and inspiring his fellow patients, Prescott has been able to build on the solid foundation they developed during their care in the ARP. “A lot of people had great pain before their amputation, or had trouble moving because their limb wasn’t working for them. The Amputee Rehabilitation Program shows us how to regain our independence with our new prosthesis, and the support group reminds us that we aren’t doing it alone,” he says. “We try to look forward to what we can do again now.”