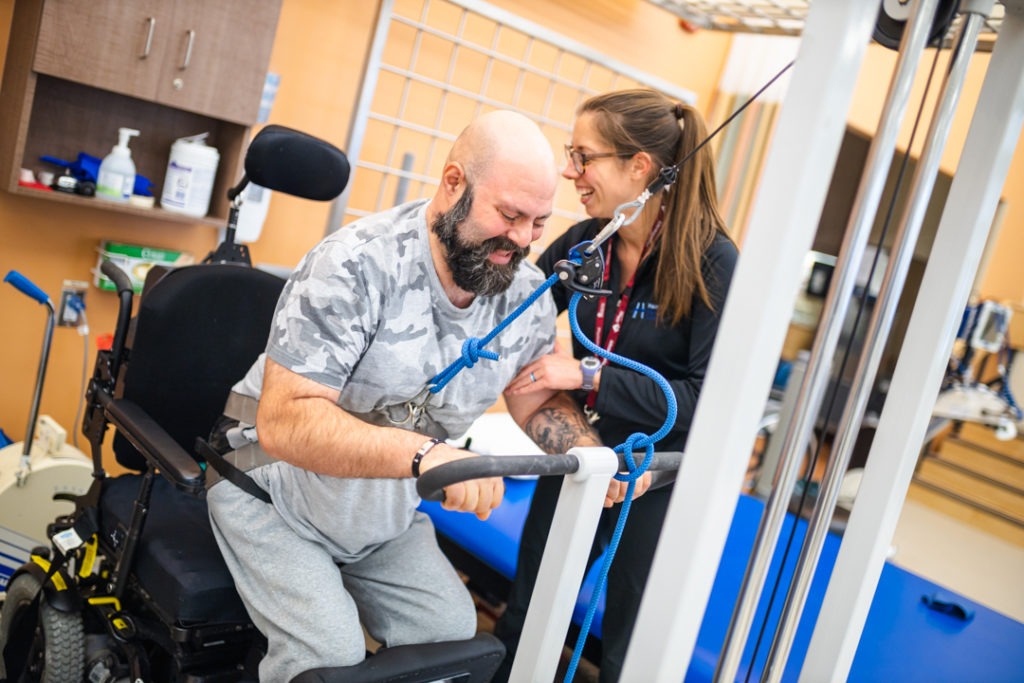 Mike Ciganovic woke up in the middle of the night with excruciating back pain. He was sweating and vomiting violently. His wife, Maria, knew he was at risk of aortic dissection, a major tear in the main blood vessel of the heart that can be deadly. She recognized the signs she had been warned about and immediately called 9-1-1.

When he arrived in the emergency department at Hamilton General Hospital (HGH), Maria told the team what was likely happening to her husband. A CT scan confirmed it—his main blood vessel had torn right down to his heart valve, allowing blood to gush through the opening and cause further damage. If not caught quickly enough, aortic dissection is often fatal. Mike was in critical condition and was rushed into emergency surgery with heart surgeon, Dr. Richard Whitlock.

“Waiting during his surgery was horrible,” says Maria. “Dr. Whitlock told us after that if we hadn’t come in when we did, he would be dead.”

Loss of feeling in arms and legs

Mike survived the initial surgery, but he couldn’t feel his legs. His left arm was also starting to go numb. Mike and Maria were told they had two main options:
• have a second surgery that would improve his chances of recovering lower body movement, but came with a high risk of heart attack or stroke during the procedure
• not have the surgery, and likely never recover feeling in his legs

“He was lucky to be alive at this point,” says Dr. Whitlock. “We wanted to give him the best chance at recovering as much function as possible, but there were serious risks involved.”

Mike and Maria decided to go ahead with the procedure. It went well, but he still had a long road ahead.

For weeks, there was no sign that Mike’s spinal cord was going to recover and the team was under the belief that Mike would never move his legs again. Then an exciting day arrived: “I remember going to see him in his room, and he said to me, doc, I can move my toes,” says Dr. Whitlock.

Mike required medical and rehabilitation care at three different HHS sites. As part of a collaborative system, his care teams could share information and advice. He spent five months at HGH, before moving to St. Peter’s Hospital to continue his recovery. When he was healthy enough to begin intense inpatient rehabilitation, he was transferred to the Regional Rehabilitation Centre (RRC). There he worked through daily exercises to regain movement in his legs and left arm. 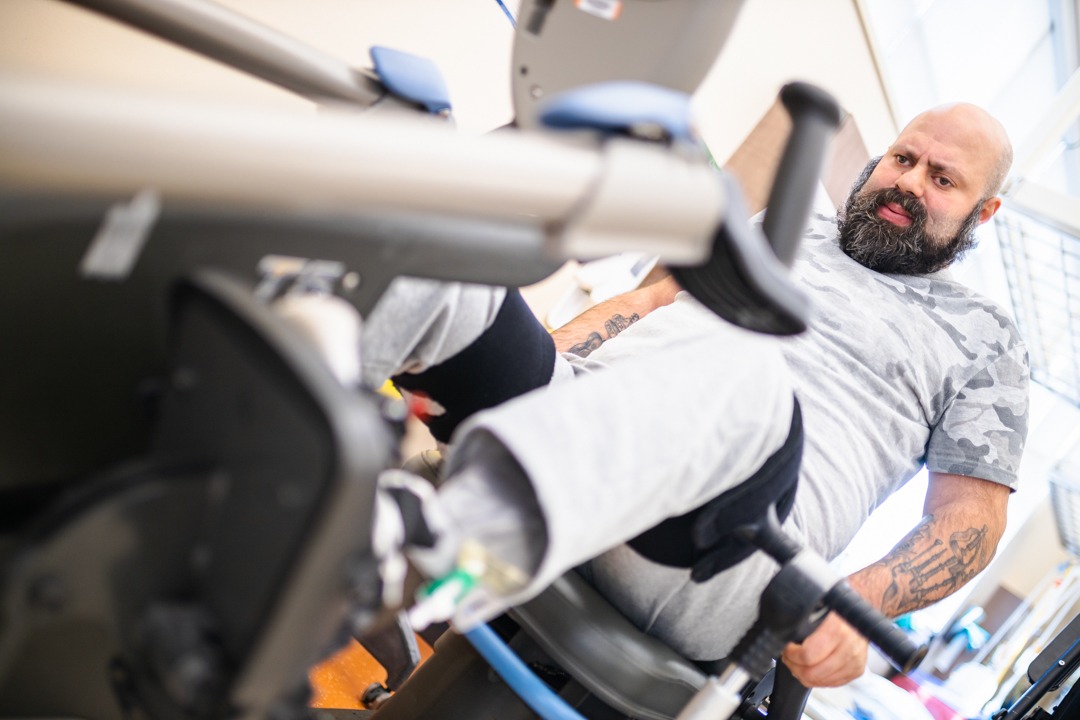 “I started to regain some movement in my legs,” says Mike. “I got back full movement in my left arm that I could barely feel before.” He was even able to play his bagpipes at a few social events for spinal cord injury rehabilitation patients.

In September, Mike was discharged after two months at the RRC. He continues to visit the centre as an outpatient for physiotherapy three times a week, working with physiotherapist, Meaghan MacKie to strengthen his body.

Mike is now participating in land based and pool based physiotherapy to maximize his functional recovery and achieve his goals. In the pool, he and Meaghan are able to isolate and strengthen his leg muscles much more accurately and effectively.

Meaghan says that despite some medical complications that have affected his therapy, including a delayed start in the pool, he is focused on getting the most out of his rehabilitation. 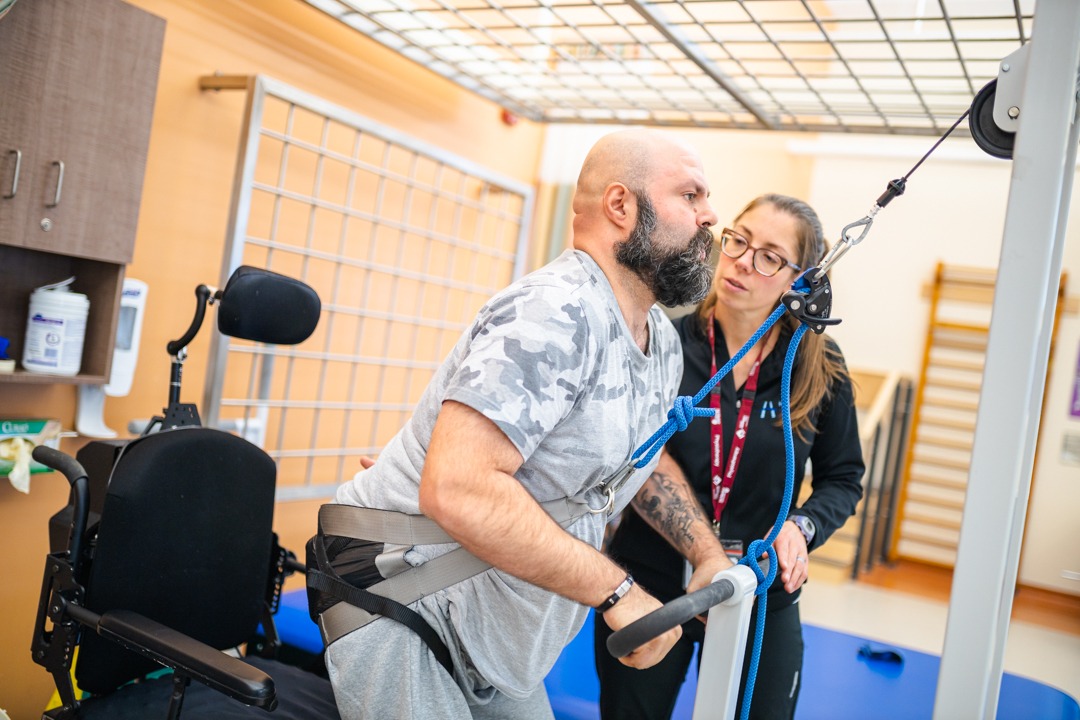 “Mike shows remarkable perseverance. He continues to work hard, be diligent about managing and addressing these complications, and advocate for himself to have every opportunity in his rehab journey.”

He’s been a cheerleader for himself, and others as well. When he’s working hard, and having a good day, you can hear him singing in the rehab gym, cheering on his fellow patients.