Baby recovers from hole in his diaphragm

Parents Vanessa and Michelle were told they were likely not going to be able to hold their baby for a while after he was born, but both were able to have skin-to-skin contact the same night.

They were told not to be surprised if their baby didn’t cry when he was born, but he let out a long, loud shriek.

They were told there was a good chance their baby would be intubated to help with his breathing, but that didn’t need to happen right away. (Intubation is the process of inserting a tube through the mouth or nose and into the airway so a person can be placed on a ventilator to breathe.) Luckily, Sawyer didn’t require intubation until later.

A medical condition developed before birth

All of these possibilities were shared with the family because baby Sawyer was diagnosed with a congenital diaphragmatic hernia (CDH) before he was even born. CDH occurs when the diaphragm muscle (the thin layer that separates the chest from the abdomen) does not close during a baby’s development, so parts of the abdomen such as the stomach, intestines, liver, and spleen can move through the hole and into the chest. Since other parts are moving into the chest, the lungs aren’t able to fully develop, so babies like Sawyer with CDH often experience difficulty breathing.

“A baby with CDH is likely to be severely compromised in terms of breathing and also blood supply to the lungs, so many of those babies need to be intubated and ventilated,” says Dr. Salhab el Helou, the Medical Director in the Neonatal Intensive Care Unit (NICU) at MCH. In Sawyer’s case, he could breathe well on his own and was intubated only for surgery and right after surgery.

Despite these challenges, parents were head over heels in love with their new addition. “It’s true what parents say, the second you see your child when they’re born, there’s a love like no other,” says Michelle. 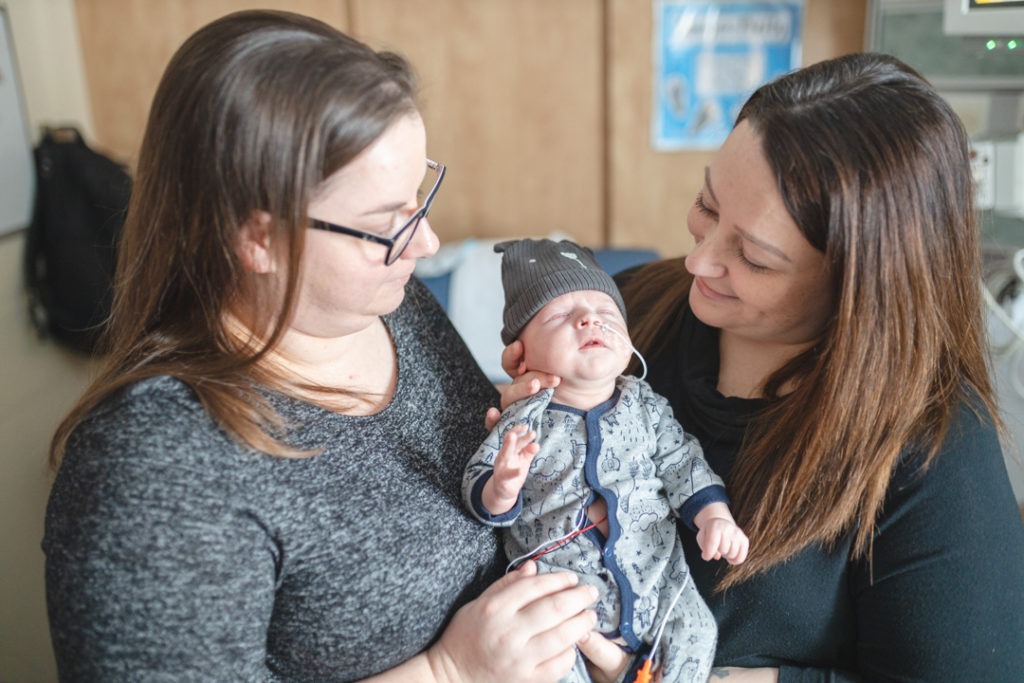 Surgery to repair the hole in his diaphragm

Two days after he was born, Sawyer had surgery to repair the hole in his diaphragm. Intestines and part of his spleen made their way into the chest cavity but pediatric surgeon Dr. Lisa VanHouwelingen was able to move them back to their homes and repair the hole using his own muscle (rather than a patch which is required in some circumstances).

After surgery, Sawyer required some medical support, which is typical post-surgery. He had a catheter for urination, a PICC line for fluids and medication, an arterial line for blood pressure monitoring, a peripheral IV line for drawing blood if required, and a nasogastric (NG) tube for feeding.

For now, Sawyer’s left lung is smaller than his right, so he has to work harder to breathe. All this hard work makes eating difficult too, so between breastfeeds and bottle feeds, Sawyer was using a nasogastric (NG) tube to get his nutrients so he could take a break from eating the traditional way. “Babies with CDH need to learn how to feed,” explains Dr. el Helou. “They wouldn’t have been able to ‘practice’ in utero.”

About a week after surgery, Sawyer was extubated (he no longer required a tube in his airway) and placed on a CPAP machine for a constant, gentle flow of air that helps with breathing and maintaining good blood oxygen levels throughout the night. 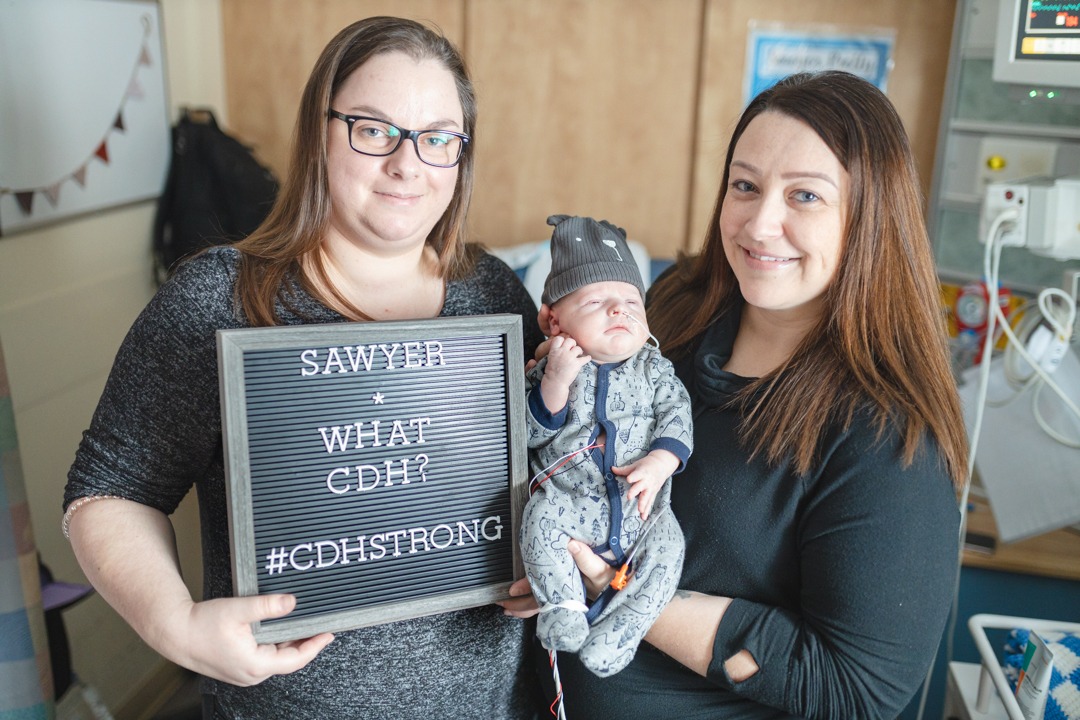 Sawyer recovered in the Neonatal Intensive Care Unit (NICU) before graduating to the Level 2 Nursery. He was discharged home on February 9 and has been thriving.

“Sawyer is taking all of his feeds by mouth and eats like a champ. He’s steadily gaining weight and his pediatrician says he is ahead as far as developmental milestones so far,” says Vanessa. “Sawyer is successfully doing tummy time, lifting and holding his head up for a period of time, turning his head from side to side, recognizes voices, follows objects and has already smiled!”

“Any milestone that he’s reached has been a favourite moment: every tube coming out, getting off every medication, every cry he’s made, it’s just been amazing,” says Michelle.

Sawyer will be followed by a specialized team at MCH to monitor his feeding, growth, and the development of his brain and lungs. Doctors don’t expect any difficulties later in life.

“We couldn’t have asked for anything more than the care he has been given,” says Michelle.

“We certainly feel extremely lucky with the outcome Sawyer has had. We know this isn’t the case for many CDH babies, but we hope our story can give newly diagnosed parents hope. We know stories like this brought us some peace when we were initially diagnosed and looked to online resources for guidance,” says Vanessa.

“It can be said that Sawyer has done extraordinarily well,” says Dr. el Helou.