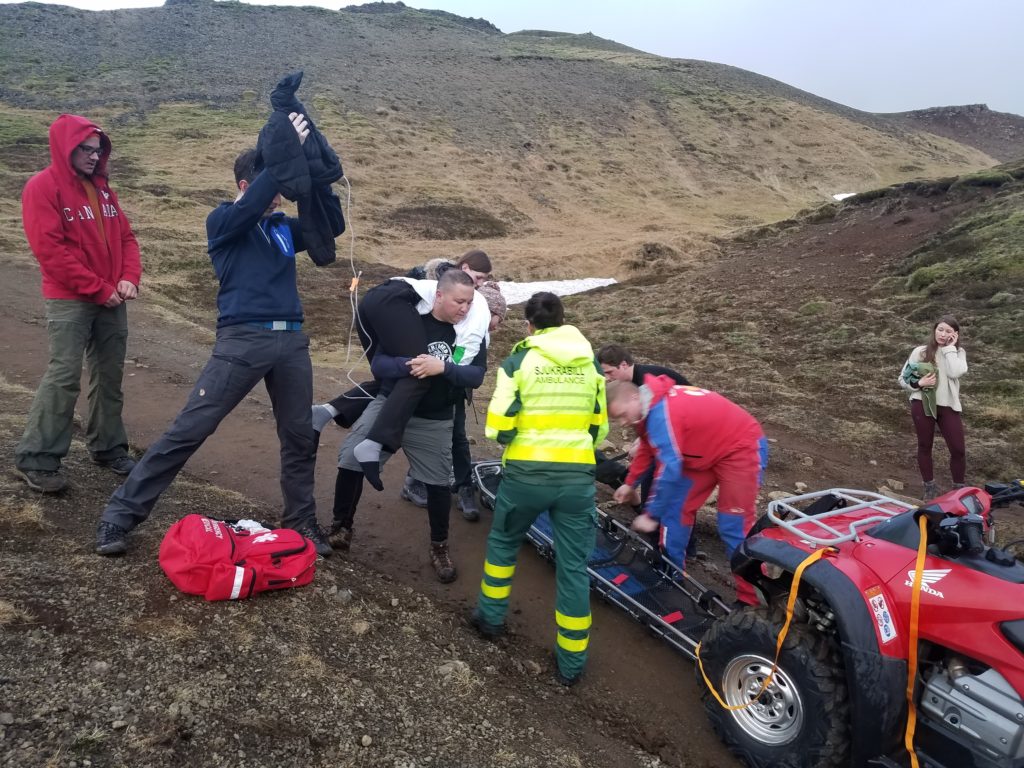 Becoming a patient at my own hospital

As a previous member of the Public Relations & Communications team at Hamilton Health Sciences, I would help tell stories of patients who have experienced life-changing injuries or illnesses. I heard about how their bodies turned against them, and the physical and emotional challenges that come with that. I tried to put myself in their shoes, but it’s always hard to imagine what they’re going through. It became a bit easier recently, because I now know what it’s like to be on their side of the equation.

It became a bit easier recently, because I now know what it’s like to be on their side of the equation.

In February, I travelled to Iceland for a five day trip with two close friends. On the second last day, we decided to drive to a “hot river” located in the beautiful Reykjadalur Valley in south Iceland. The name “Reykjadalur” literally means Steam Valley, which was quite apparent on our hike to the top of the mountain. The valley was filled with hot springs, mud pools and even a hot river where tourists and locals can bathe. It was a sight out of a fairy tale. We changed into our bathing suits, and I was the first to head down to the river. As I stepped down onto what looked like a hard mud surface, I quickly fell through. Right away I knew something wasn’t right. My feet were burning! No matter how hard I tried, I could not get out and could feel the hot bubbling and acidic mud burning through my skin. It felt like a million knives were stabbing my feet and lower legs, and my nerve receptors were on fire. I started screaming and was pulled out by my two friends. My two friends starting frantically searching for help. People around us volunteered to help bring me water, and were desperately searching to see if there was a doctor nearby. As I lay there waiting, I fell out of consciousness from pain and shock. This was more serious than we had initially thought. Nobody could get any cell phone reception and there was no emergency help nearby. Four brave men volunteered to take turns carrying me down the mountain while a few ran ahead to try and get cell service.

After less than 24 hours, I was determined to fly home and was admitted to the Burn Trauma Unit at the Hamilton General Hospital.

After what had seemed like hours, Paramedics met us partway up the mountain.. I continued to fall in and out of consciousness, and woke up in the hospital in Reykjavik and was initially treated by the plastic surgeon. While I was under anesthesia the medical team removed the burned skin and treated the exposed areas. After less than 24 hours, I was determined to fly home and was admitted to the Burn Trauma Unit at the Hamilton General Hospital (HGH). Right away, I felt safe knowing I was not only close to home, but in a place I trusted for its expertise and clinical knowledge.

You don’t realize the extent of what they do until they are helping you shower or put your pants on.

Working on the administrative side for Hamilton Health Sciences, you don’t always get to see the extent of what front line workers do for their patients. Although I knew the care we have here is great, it wasn’t until I was admitted that I realized it is much more than that. It’s exceptional. Every single person, from physiotherapists to environmental aides did more than I could have asked for. They didn’t just come in and complete their duties to earn a living . They worked endlessly to make sure I was comfortable and cared for and even met odd requests that brightened each patient’s mood. You don’t realize the extent of what they do until they are helping you shower or put your pants on. When I worried that my pain would never go away, they soothed my fears, and made feel better both physically and emotionally. What seemed like a harmless excursion turned out to be a terrifying nightmare. I have had several procedures to remove damaged skin from my feet, and they will likely never look the same. For the next two years I cannot expose my feet to the sun. The experience was horrifying, and it has left me with life-long scars, but I truly have no regrets. I was fortunate to receive the best care possible and have become much stronger as a result.

I look at my HHS colleagues differently now. I always thought of them as heroes when I heard stories about what they had done for our patients. But they’re not just heroes now. They’re my heroes.