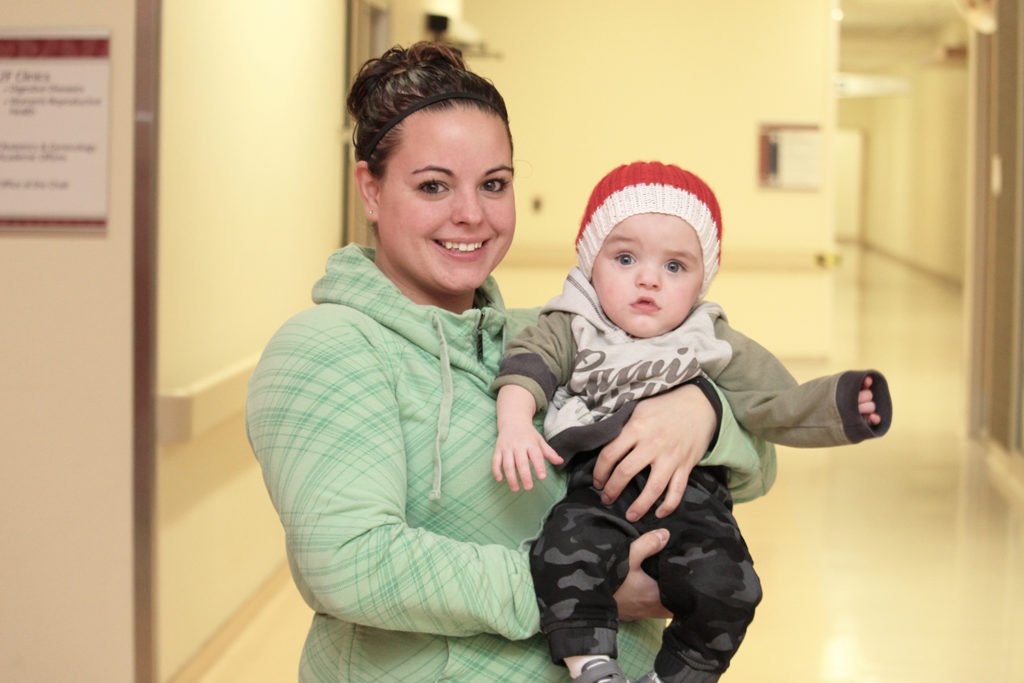 Jessica and Tyler of Brantford were devastated when they lost their son Reece in June 2016. Born 24 weeks into Jessica’s pregnancy, Reece passed away from complications due to liver failure in the Neonatal Intensive Care Unit (NICU) of McMaster Children’s Hospital (MCH).

“Only three weeks after we lost Reece, I was surprised to learn that I was pregnant again,” recalls Jessica. “We were excited and scared at the same time.”

When Riley was born at MCH 23 weeks into the pregnancy, weighing only 1 pound, 3 ounces, he faced medical challenges right away. Riley suffered from a condition known as patent ductus arteriosus (PDA), a heart problem in which the connection between the aorta and pulmonary artery remains open after birth instead of closing.

“Riley is doing very well and we just celebrated his first birthday.”

“Riley had difficulty breathing because of the PDA and he required surgery to close the artery,” explains Jessica. “After surgery, his lungs kept collapsing, but the use of a ventilator helped and his breathing gradually improved.”

Riley’s eyesight was another cause for concern, as he suffered from an eye disease called retinopathy of prematurity (ROP), which results in the abnormal growth of blood vessels in the retina. ROP can result in impaired vision or even blindness if untreated, requiring Riley to undergo surgery on both eyes.

Yet another surgery was required when Riley suffered from a hernia. The procedure was successful and he was discharged from the NICU only a few days later. Jessica and Tyler finally took Riley home after he spent the first 147 days of his life at MCH.

“Riley is doing very well and we just celebrated his first birthday,” says Jessica. “The amazing team at the Hospital will continue to monitor him for the next year to ensure that he’s meeting his milestones. I encourage donors to support McMaster Children’s Hospital Foundation to help other families like us when we need it most. Every person can make a real difference.”

You can donate to The Foundation at hamiltonhealth.ca/donate.