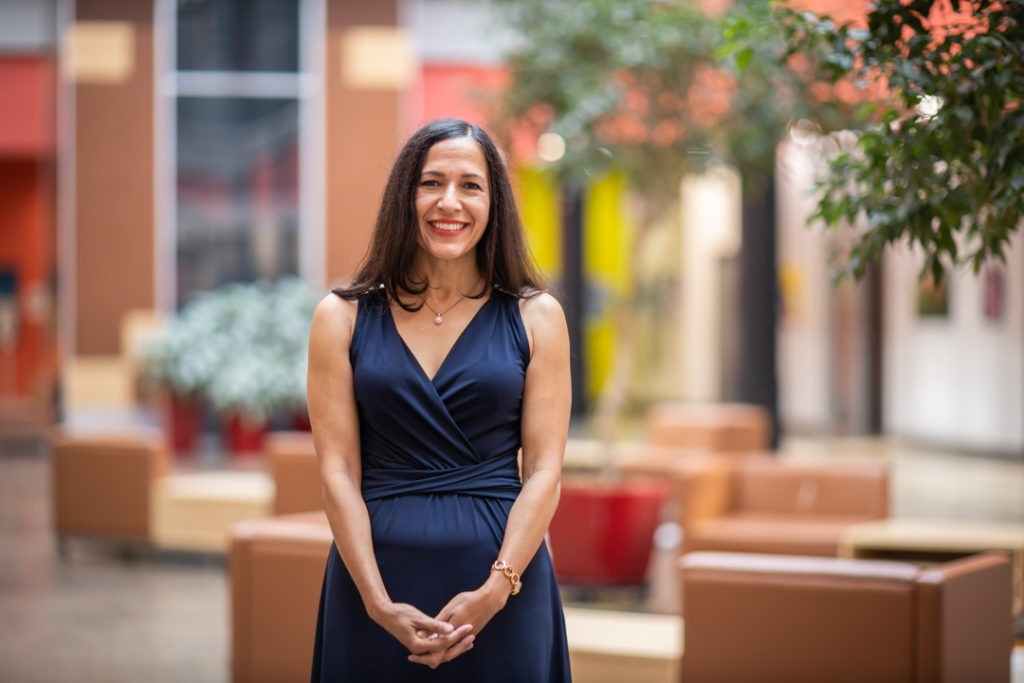 Dr. Sheila Singh co-founded a Canadian research company which was recently acquired by an American company. The newly created subsidiary Century Therapeutics Canada team will be based at the McMaster Innovation Park.
Stories

The path of least resistance isn’t one travelled by Dr. Sheila Singh.

“My mother always told me that I never took the easy way,” said Singh, a pediatric neurosurgeon at Hamilton Health Sciences (HHS) and a leading researcher into glioblastoma –an aggressive, incurable type of brain cancer that can affect people of any age.

It’s the same cancer that Tragically Hip frontman Gord Downie died from two years ago. Less than five percent of people diagnosed with glioblastoma, also called GBM, live past five years and most will die within two years.

Singh praised the late singer for being so open about his diagnosis with his fans.

“He did a huge service to our research by letting people know that GBM is currently incurable and by promoting the need for more investment into research,” said Singh.

“That’s even more reason to fight this cancer.”

Never one to shy away from a challenge, Singh chose to research GBM because she wanted to improve the quality of life for people diagnosed with this disease. As well as having a high mortality rate, GBM also robs people of their ability to speak, move and think clearly.

“That’s even more reason to fight this cancer,” said Singh, who led a multi-institutional, multi-disciplinary research program with funding provided by the Terry Fox Research Institute.

Her team was making new, cutting-edge discoveries into GBM, and wanted to extend their work into finding new therapies. This motivated Singh to co-found Hamilton-based Empirica Therapeutics in partnership with University of Toronto’s Dr. Jason Moffat.

“There’s a desperate, unmet need with GBM,” said Singh. “All of the current therapies are based on old biological targets, and here we were uncovering all of these new biological targets that carry a lot of promise and hope.”

But research requires funding, and convincing companies to invest in difficult-to-treat cancers like GBM is challenging because the mortality rate is so high.

“Unfortunately, there are currently few happy endings with this cancer,” said Singh. “It’s not an easy win for companies looking to invest in cancer treatment.”

Even so, Empirica’s work caught the attention of American-based Century Therapeutics, an early-stage biotech company with the financial muscle to invest. Last year, Century got up and running with a $250 million investment from life science company Bayer and Versant Ventures, a healthcare venture capital firm.

“Century was impressed with our research and discoveries, and offered us the opportunity to be part of their company and help grow Century Therapeutics in Canada,” said Singh.

Keeping the science in Canada

In June, Century acquired Empirica, with Century bringing expertise in immunotherapy to the table and Empirica bringing the expertise in GBM and new technologies. The subsidiary – Century Therapeutics Canada — will be based at the McMaster Innovation Park. Singh and the Century Canada team are currently looking into leasing space there.

“I’m proud that we were able to attract this gold-star American company with an incredible amount of investment in developing new immunotherapies for cancer,” said Singh. “And the fact that this investment is happening in Canada is even better because we’re keeping the science here.”

“Through this innovative partnership, we will continue to attract the best and brightest researchers to Hamilton to deal with one of the most difficult, complex cancers and improve the quality of life for people who are affected,” said Scott. “It’s another example of HHS talent leading the way in transforming healthcare through innovative partnerships and solutions.”

Moving forward, Singh and her team are focusing on treatments to slow down GBM in order to buy time for patients and find a combination of therapies to treat the cancer.

“You have to play the long game in this kind of research.”

“It’s very unlikely that a cancer as complicated as GBM is going to be cured by a single therapy directed against a single target,” said Singh. “In all likelihood it’s going to be a combination of therapies that will end up curing a cancer that’s this heterogeneous and complex.”

Goals include getting two to three products into clinical trials over the next five years. The focus will be on GBM but the team also has a secondary program studying brain metastases, when cancer cells spread from their original site elsewhere in the body to the brain. These cancers are 10 times more common than GBM, and one of the major causes of fatality in cancer. They are also considered untreatable.

“You have to play the long game in this kind of research,” said Singh. “That’s why investment is so important, and why we are so excited with this new partnership.”