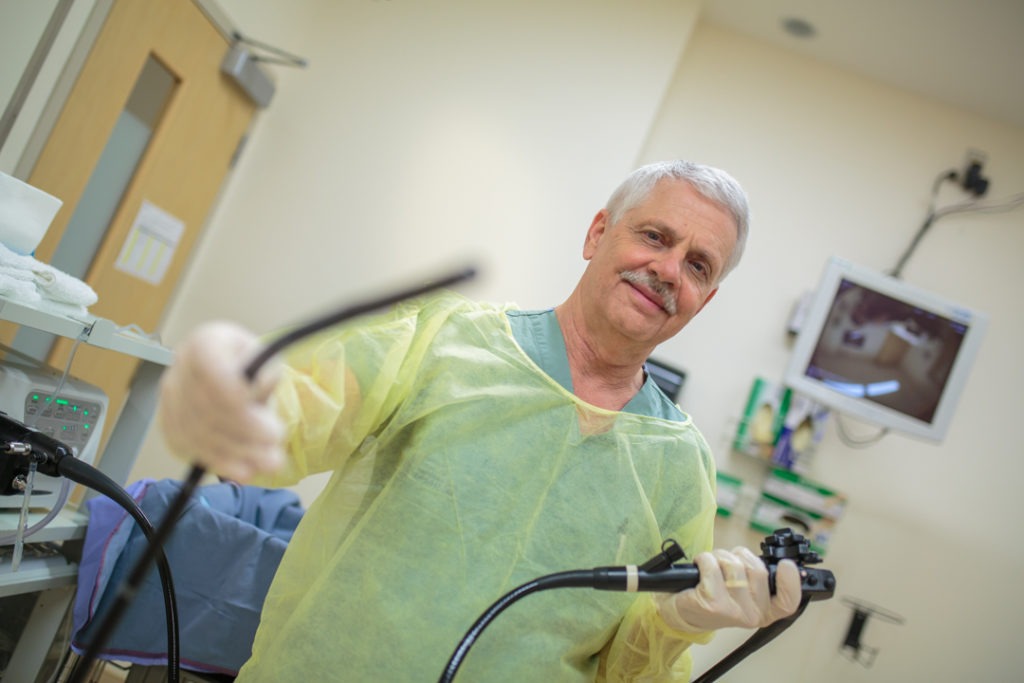 Meet Dan. He let us live-stream his colonoscopy.

It takes guts to give the internet a front row seat to your colonoscopy. But Dan Logan is happy he did.

“I’m glad I did it. When Dr. Lumb first asked me about this, I didn’t even know what Facebook Live was, so I was a bit unsure. Seeing people watch it and comment makes me happy I said yes.” On March 15, Logan became the first Canadian to have his colonoscopy broadcast on Facebook Live. Hamilton Health Sciences (HHS) live-streamed the procedure for Colon Cancer Awareness Month to reduce fear and stigma around colonoscopies and raise awareness for screening.

“When Dr. Lumb first asked me about this, I didn’t even know what Facebook Live was…”

Dr. Barry Lumb, physician-in-chief at HHS, and a well-respected gastroenterologist, has performed over 15,000 colonoscopies in his career, and knows how intimidating the procedure can be for some patients.

“That’s why we’re showing people how it’s done. We want people to know there’s nothing to be afraid of,” he says. Dr. Lumb and nurse, Sandi Bell, performed Logan’s colonoscopy at Juravinski Hospital and Cancer Centre, where an average of 8,500 colonoscopies are performed each year. During the process, he answered questions from viewers, described how he was navigating the colon, and provided important information about screening.

What do you need to know about screening?

The risk of developing colon cancer goes up after the age of 50, and that’s the age when screening should begin. Men and women between the ages of 50 and 74 are encouraged to get screened for colon cancer every two years as part of their routine medical care. For most people, this means taking a simple, at home test called a Fecal Occult Blood Test (FOBT). The FOBT is for men and women in this age range with no symptoms or first degree family history (parent, sibling, child) of the disease.

“It’s important that people know the best screening option for them so we can catch this disease early and treat it.”

“This is a really effective screening method,” says Dr. Lumb. “It’s important that people know the best screening option for them so we can catch this disease early and treat it.”

If your FOBT comes back positive, the next step is a colonoscopy for a closer look. You should also talk to your family doctor about a colonoscopy if you have a first degree family history or you’re experiencing symptoms. Even when they know they’re at risk, people sometimes shy away from receiving a colonoscopy because it seems like a scary procedure.

Logan wants people to know that’s not the case. Logan’s mom died of colorectal cancer when she was just 59-years old, so he started getting screened before he turned 50.

“I was only 27 when she died. It was really hard watching her go through that,” he recalls.

When it’s caught early, nine out of 10 people with the disease can be cured. If it’s caught after it has already spread to other parts of the body, treatment is less successful; only about one out of eight people whose colon cancer has spread will be cured.

During Logan’s procedure, Dr. Lumb cut out a polyp, a small growth on the inside of the colon that can grow into cancer if left unchecked. This doesn’t hurt, because the colon doesn’t have pain receptors. For many viewers, that was reassuring to see. One commenter, named Mitzie, said, “Thank you Dr. Lumb for letting us view this procedure! You have answered all of my concerns.” The video has over 17,000 views on Facebook and prompted over 350 comments and questions both during and after the procedure.

Both Logan and Dr. Lumb are glad to see people are finding the video reassuring. They hope it will prompt more people to get screened for colon cancer.