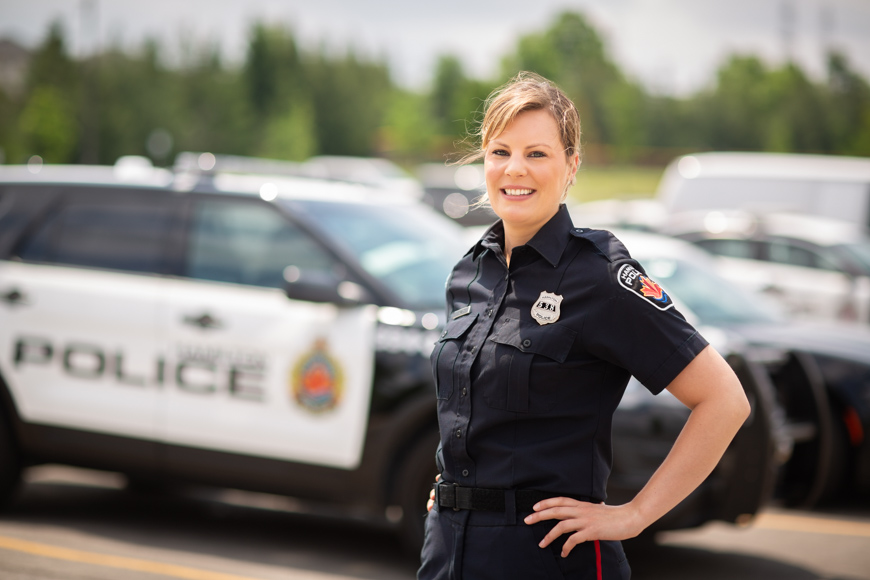 It was a typical day on the job for Kaleigh Friday, a Hamilton police officer.

That is, until she was rear-ended in her police cruiser. Another vehicle ran in to Kaleigh’s while she was stopped. Thankfully, she escaped the incident without any life-threatening injuries. Still, she took a trip to the local emergency department to get checked over.

The emergency team cleared her to go home with a prescription for rest. But the next day, things took a turn: Kaleigh’s head was pounding, she could barely move her neck, and she could feel pressure building behind her eyes. Determined to not miss work, she carried on as usual and fought through the growing discomfort.

But, Kaleigh’s symptoms eventually became so intrusive that she knew something wasn’t right. Loud noises were excruciating, and looking at a screen for more than a few moments was impossible. That’s when Kaleigh sought out the Acquired Brain Injury (ABI) program at Hamilton Health Sciences (HHS) where she was connected to Dr. Sahlas, a neurologist. Immediately, he knew that she was suffering from a severe concussion and that she was a prime candidate for the program’s outpatient service.

Over the coming weeks Kaleigh worked with Danielle Perkin, a community intervention coordinator at HHS whose primary role is to connect brain injury patients with the various services and supports they may need throughout their recovery.

“Danielle is amazing,” says Kaleigh. “She was able to connect me to all the right people – like a physiotherapist and an occupational therapist – who would help me heal.”

“They helped me return to work. They’ve been a huge support.”

Over many months, Kaleigh began the slow road to recovery. She took several months off work to focus on getting better. Her occupational therapist taught her to cope with environmental triggers that made her symptoms worse, and she learned to pace her daily activities. Eventually, when she felt ready to return to work, the ABI team helped her make a smooth transition back.

“The first thing we do when a person is referred to our program is determine what supports and resources they already have access to, and what additional resources they need to address whatever problems they’re experiencing,” says Danielle.

“After six months, they helped me return to work,” says Kaleigh. “They’ve been a huge support.”

Danielle says that, when a concussion happens, many patients feel worried and unsure about what lies ahead. In the midst of uncertainty, the ABI program becomes the person’s central support, much like an anchor in a storm.

“Concussion can have very serious and severe effects on a person’s physical, emotional and mental well-being,” says Danielle. “In our role as CICs and care providers, one of our priorities is to reassure our patients that what they’re experiencing is normal and help alleviate some of the fear that comes with an acquired brain injury.”

For now, Kaleigh’s taking her time easing back in to her usual routine. She’s been able to return to work part-time, and although she’s not back in her cruiser yet, returning to patrol duty is a key motivator in her recovery. She says her colleagues at Hamilton Police Services have supported her in taking her return to work “one day at a time”, a motto that so many people with concussion know is essential to a good recovery.

If you’re concerned that you may be suffering from a concussion, visit your nearest emergency department or urgent care centre as soon as possible. View a list of common concussion symptoms.

If you’ve been diagnosed with a concussion, here is some information to help with your recovery.