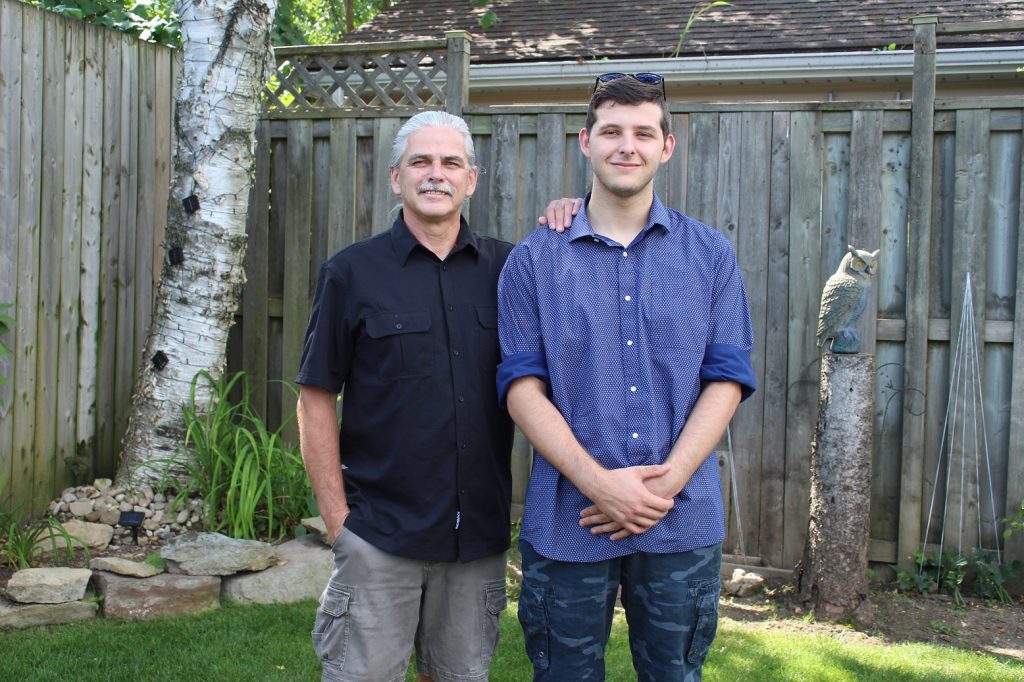 Cancer survivor Scott (left) with his son. Scott’s motivation for overcoming cancer was to watch his son grow up.
Stories

Conquering cancer for his son

The very sight of food made him feel sick to his stomach. Scott from Niagara Falls was at a family gathering in August 2013 when the nausea and the pain in his lower left side began.

“My family physician sent me for an ultrasound,” recalls Scott. “They had trouble finding my spleen because the image was unusually cloudy, so I was sent for a CAT scan. It was on my son’s 11th birthday that I received a call with the results.”

A mass was found growing on Scott’s pancreas. He was referred to Juravinski Hospital and Cancer Centre (JHCC) for the next steps in his care.

“It was terrifying to learn about the tumour,” says Scott. “My mother had passed away from pancreatic cancer and I was worried that the same thing would happen to me.”

Scott was diagnosed with pancreatic cancer and it was determined that surgery was the best option.

“When I first met my surgeon, Dr. Deepak Dath, I held up my phone and showed him a photo of my son. I told Dr. Dath that my boy was the reason I needed to get through this. I wanted to be able to watch him grow up.” 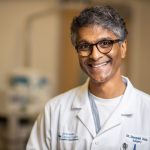 “I’m grateful to Dr. Dath, the imaging team and the rest of the care providers for their warm and compassionate care.”

The surgery was exceptionally complex, as the cancer had spread beyond his pancreas. During the 11-hour procedure, much of Scott’s pancreas was removed, as well as his spleen, adrenal gland and a portion of his stomach.

Originally, Scott was scheduled to undergo chemotherapy after surgery to help fight any remaining cancer cells, but he was too weak. Luckily, a follow-up scan showed no signs of cancer.

“I continued to gain strength in the following months,” says Scott. “I had regular scans and blood work, and the cancer never returned. My pancreas continued to produce excess fluid for a couple of years, and I’d visit JHCC to have it drained, but my recovery progressed steadily.”

Scott’s surgery was seven years ago and he is still cancer-free. Although he experiences some muscle cramping and needs to be careful not to lift anything too heavy, Scott is so happy to spend time with his son and family.

“I’m grateful to Dr. Dath, the imaging team and the rest of the care providers for their warm and compassionate care,” he says. “Thanks to them, I’ve been able to watch my son finish high school and get his driver’s licence. My own father passed away at a young age and I wanted to be there for my son. Those are the important things in life.”

Hamilton Health Sciences | @HamHealthSci - December 8
Moments like this are so special for our patients, families and staff. ❤💚 #feelingfestive twitter.com/mch_childrens/…

Hamilton Health Sciences | @mch_childrens - December 8
We had 5 winners of the Champ contest, one of which generously decided to donate their Champ to a patient. So, here… https://t.co/gTzOn5go6W

Hamilton Health Sciences | @HamHealthSci - December 8
“The people I work with are really nice, and we work together as a team.” Internationally educated nurse Selassie A… twitter.com/i/web/status/1…

Hamilton Health Sciences | @HamHealthSci - December 7
“Receiving this (bursary) shows that the hospital believes in me and in what I’m doing.” Staff members Helen Toews… twitter.com/i/web/status/1…
Ways to Give