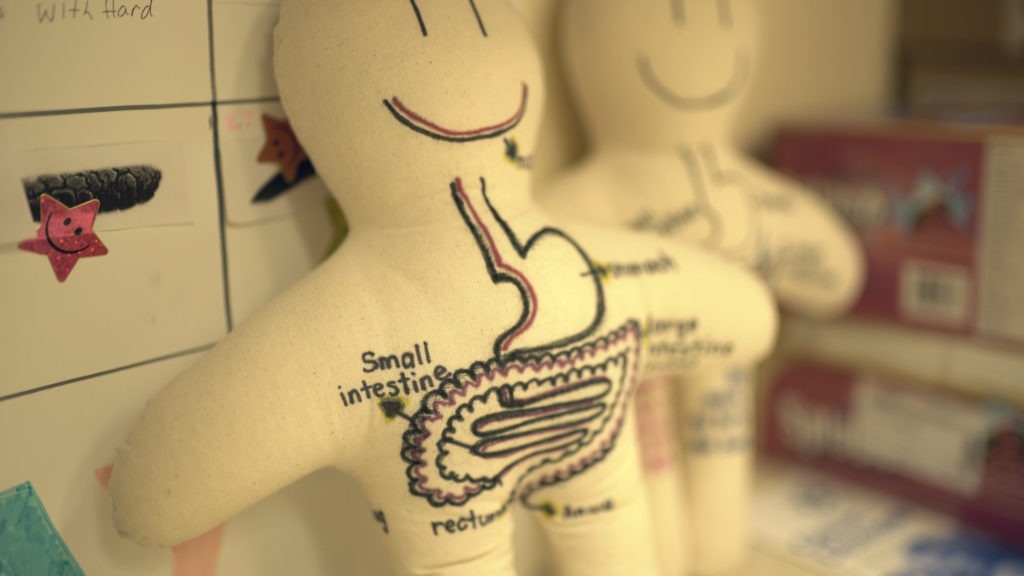 What is the difference between Crohn’s disease and ulcerative colitis?

Crohn’s disease and ulcerative colitis (UC) are diseases that cause a person’s body to attack their own intestines. We often hear people say ‘Crohn’s and colitis,’ grouping them together, but they are individual conditions. These diseases are sometimes called Inflammatory Bowel Disease (IBD), and are lifelong conditions.

Crohn’s disease can affect anywhere from your “gums to your bums” – so, your entire digestive tract.

Ulcerative colitis only affects the colon.

Patients will either have Crohn’s disease, or ulcerative colitis. But in children, it can sometimes be difficult to know whether the disease has fully presented itself or not. That’s why, in children when it’s difficult to know for sure, it may be diagnosed as IBD-Unclassified. As a child grows up, it usually becomes more clearly Crohn’s or UC.

Is IBD being diagnosed at younger ages?

We’re starting to see more and more kids under the age of 10 developing IBD. It’s even more concerning that these numbers are going up so quickly in Ontario, Canada.

“It is important for doctors to think about IBD though, and recognize that this is definitely a disease that can happen in kids.”

That said, parents shouldn’t necessarily worry about looking for any specific signs of IBD in their child just because the rates are going up. When patients have symptoms, they tend to be severe enough that a child would be going to their doctor anyway. It is important for doctors to think about IBD though, and recognize that this is definitely a disease that can happen in kids.

Parents may see symptoms including blood in their child’s stool, their child needing to poop very frequently, having very low energy, or not growing properly. It’s important to pay attention to your child’s health and take them to their family doctor when any symptoms arise. Your doctor can tell you if the symptoms look like IBD, or not.

Why is the age of diagnosis getting younger?

Lots of research is going into attempting to answer this question. And some of these answers may also give us insight into why people get IBD in the first place. The rates of inflammatory bowel disease have increased a lot in children over the past few decades. But a few decades is not enough time for someone’s genetic makeup to change that much. Even though most diseases are caused partly by your genes, and partly by the environment, the way this disease has changed really suggests that environmental factors are at play.

Some of these factors may include: differences in the way that our food is processed, different industrial exposures we are getting from the air we breathe, changes in our water quality, and other factors that might be altering the bacteria that lives within our digestive systems.

If an immediate family member (sibling, parent) has IBD, your risk of being diagnosed is significantly increased. If a second degree family member (aunt, uncle, cousin, grandparent) has IBD, there is a slightly higher risk of having Crohn’s disease or UC. Despite this, we know that more than 80% of patients with IBD don’t have any family history of this – so, there’s more going on than just genetics. Scientists have identified about 160 different genes that increase the risk of developing IBD, independent of environmental factors, but genetics still don’t seem to explain the whole story.

“IBD is a chronic, lifelong disease and usually when doctors talk about putting their patients into remission, they mean managing their patient’s illness well enough that they can lead a completely normal life – but their IBD never really ‘goes away.'”

Can IBD ever be controlled, be sent into full remission, or cured?

There are many ways to treat and manage Crohn’s and UC. Generally, treatments include different medications, like steroids, 5-ASA treatments, immune modulators, and biologic drugs. It is very rare for patients to be able to remain healthy, and stay off medications permanently. IBD is a chronic, lifelong disease and usually when doctors talk about putting their patients into remission, they mean managing their patient’s illness well enough that they can lead a completely normal life – but their IBD never really “goes away.”

For some patients with UC, their disease can be cured permanently through something called a colectomy. This is a surgery that involves removing a patient’s colon. This treatment can cure UC, since in UC, the disease only affects one’s colon. That’s why once the colon is removed, there is technically no disease left.

Unfortunately, the same is not true for patients with Crohn’s disease. Because Crohn’s can affect anywhere in the digestive tract, it is not practical for doctors to remove the affected area or areas – because it can just come back in another section of the intestines.

There is a lot of hope for new treatments and new therapies. We are lucky to have great treatment options that can manage the disease extremely well in many, many patients. There is reason to be confident that new treatments, and cures may be a reality in the near future.

What are some promising new treatments and research projects that might change the way we treat IBD?

There are a number of really interesting new treatments for IBD that are on the horizon. One of these treatments is called, fecal microbial transplant. Fecal transplants involve taking fecal material (poop!) from a healthy person, and getting it into the intestines of a patient with UC or Crohn’s disease. The idea is to transfer some of the bacteria from the healthy person’s poop into the patient with IBD. This has been studied in adults and showed major benefits for some patients. Here at McMaster Children’s Hospital, we have recently started a study called the PediFETCh (pediatric fecal transplant for ulcerative colitis) trial that is testing fecal transplant in children. Click here to learn more about this study, or contact our research coordinator to find out if you’re eligible.

Another really effective treatment that doesn’t get enough attention in Crohn’s disease, is something called “exclusive enteral nutrition therapy.” This involves drinking a food-based formula, and no major solids, for about 6 to 8 weeks continuously. In numerous studies, this has been shown to be just as effective as some of our strongest medications for getting Crohn’s disease under control.

Does stress play a factor in the amount or level of flares?

A “flare,” the term for when someone’s IBD gets worse and they have increasing symptoms, tends to occur in response to stress. Because of this, people with IBD unfortunately tend to experience flares at times that are most inconvenient: during exams, when going back-to-school, before job interviews, or before that important school dance. IBD is caused by over-activity in the immune system, and when we experience stress, we release different hormones that cause the immune system to “surge” or get more active. This is a perfectly normal response of the body, but for people with IBD, that normal surge can aggravate their digestive system and awaken an IBD flare.

Talking about stress and learning ways to manage potentially stressful events can help with this. Everyone experiences stress to a certain degree. People with IBD just need to learn how to manage those stresses better. Certain types of thought strategies, such as cognitive behavioural therapies, can provide relief.

Can IBD have negative long term effects when it’s diagnosed in kids?

IBD can prevent kids from growing properly so if it isn’t properly managed, it can have long term effects. Recurring flare-ups, or even just ongoing, low-level inflammation, can also lead to a build up of scar tissue. That’s why it’s important to attend appointments with your health care team regularly and keep a close eye on your child’s symptoms.

How can a person’s diet affect their IBD?

Every IBD patient is different so there isn’t one magic diet that works for everyone. Tracking what you eat, and how your body reacts to it, is a great way of figuring out what works for you.

It can be tempting to cut out certain foods when you read information online or in the news, but that’s not a good idea – particularly in growing kids. When you have IBD, just getting enough calories to fuel your body is a challenge, so you should continue eating a food unless you have determined it’s a trigger for your symptoms.

The only exception to this is foods with large particles, like seedy breads, or popcorn. These kinds of foods can get stuck in the digestive tract of someone with IBD-related scarring. Not all patients have this scarring though, so you should talk to your doctor about whether large particles, or “high residue diets” are something you actually need to cut out.

“Having open conversations about their symptoms will help you share detailed information with health care providers. That can lead to more effective treatment.”

What’s your advice for helping my child talk to their friends, teachers etc. about their IBD to increase their comfort level and reduce stigma?

Outside the home, deciding whether or not to talk about their IBD should be your child’s decision. However, it is important to talk to school administrators, or parents of friends, to make sure your child will have easy access to a private bathroom. Something as simple as making bathroom arrangements in advance can make it much easier for your child to socialize comfortably, and without worry or embarrassment.

If your child does want to talk about IBD, reminding people that it’s a chronic and lifelong condition is a good place to start. IBD is a serious illness and when people know that, they are more likely to be sympathetic and understanding.

There are also many support groups that are available for patients and parents. Some of these include the Crohn’s and Colitis Foundation of Canada, and the Canadian Digestive Health Foundation.