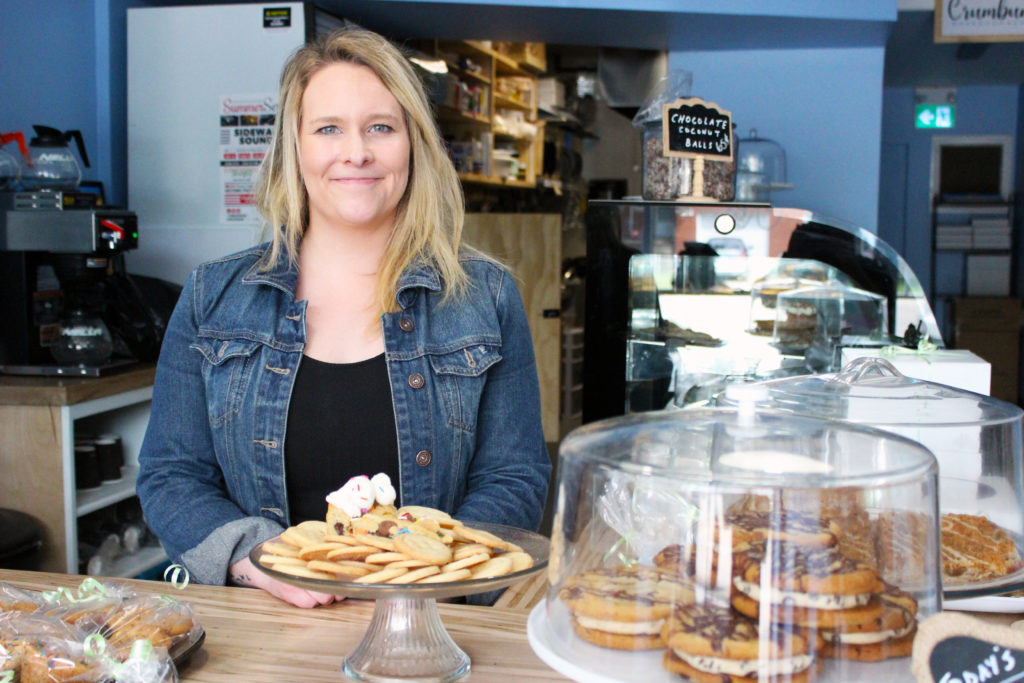 A new bakeshop located down the street from Juravinski Hospital & Cancer Centre is helping to transform health care on behalf of its customers.

Crumbuns Bakeshop Cafe offers an assortment of baked goods and coffee. The cafe is a tribute to pastry chef Joanne Emberson’s grandmother, who was affectionately nicknamed “Crumbun” by her grandfather.

“When I was younger and my grandmother was in the hospital, I would bake her treats to cheer her up,” Emberson says. “I promised her I would open up a bakery in her honour and I worked hard to make that into a reality for both of us.”

Joanne partnered with long-time family friend and food industry expert John McQuarrie to open the shop. Both Emberson and McQuarrie believe that kindness is contagious, which is why they created a “#crumbunspayitforward” photo booth for customers. Emberson also has a very personal reason for giving back to the community.

Her cousin, Carter Whipple Button, passed away just weeks before his first birthday after a long battle with acute myelogenous leukemia. Another of her cousins, Nathaniel, passed away at age 29 after battling a series of complications, including colorectal cancer and non-Hodgkin’s lymphoma.

Emberson bakes two signature treats in honour of her cousins: Carter’s Buttons cookies are a symbol of the mark that Carter left on so many, while her Candy Cookie is a reminder of Nathaniel’s love of candy and his cheerful personality. In appreciation of the care they received, Emberson and McQuarrie decided to “pay it forward” and support Hamilton Health Sciences Foundation by having Crumbuns Bakeshop Cafe join the Care4 cause marketing program. On behalf of the cafe’s customers, net proceeds from the sale of Carter’s Buttons cookies will be donated to McMaster Children’s Hospital Foundation, while net proceeds from the sale of Candy Cookies will be donated to Juravinski Hospital and Cancer Centre Foundation.

Drop by Crumbuns Bakeshop Cafe and try these tasty treats at 788 Concession Street in Hamilton.