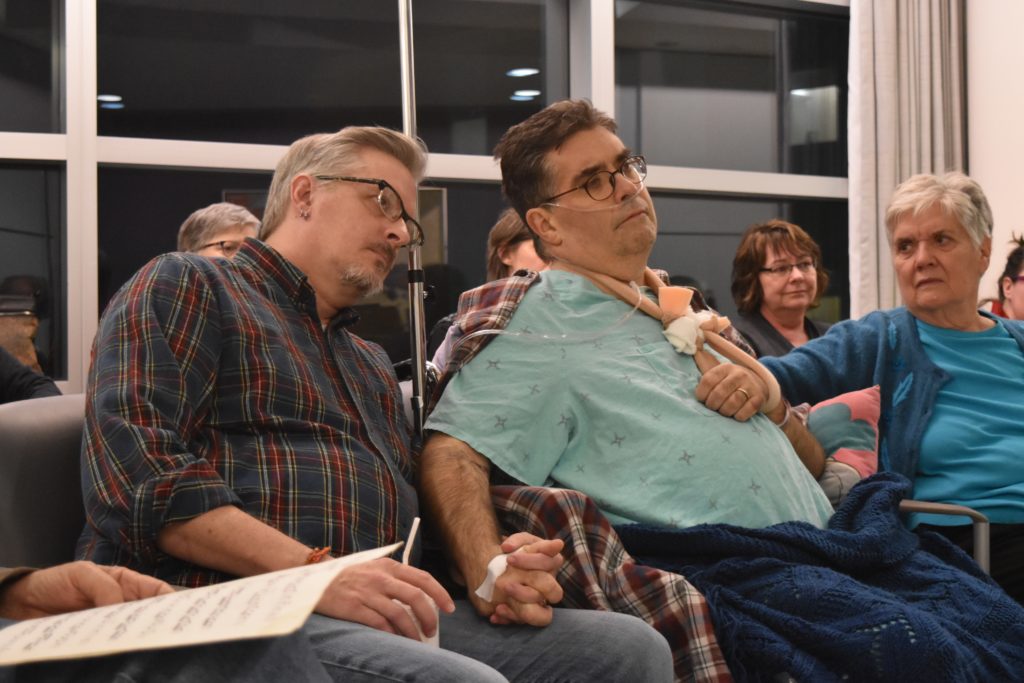 Beautiful music for a beautiful soul

David Gerry is well known and well loved in Hamilton’s music community. He’s a concert flutist, and has taught music education around the world.

As recently October 31st, he was teaching students in McMaster University’s School of the Arts. The next day, he listened to a nagging feeling in his gut telling him something was wrong.

David was diagnosed with aggressive adenocarcinoma, a type of cancer that starts in the glands. The growth of his cancer caused a break in his shoulder, and now he can no longer play flute. In the past few weeks, he has had to come to terms with the fact that he doesn’t have much time left to live, and isn’t able to play his beloved instrument.

His passion has touched the staff on unit at Juravinski Hospital and Cancer Centre where he’s being cared for. When David’s friends and family asked if they could assemble an impromptu concert for him at the hospital, they coordinated space for the performance.

“Everyone is so wonderful,” she says. “It’s like, ‘Of course!’ David needs music so David’s going to have music.”

“It was really remarkable to see this come together,” says Mark Coupland, clinical manager of the the E3 medicine unit where David is being treated. “We feel it’s important that the patient experience extends beyond medical care and all the staff were so happy that they could see this happen for him.”

The concert was emotional for David and his husband John, along with the family, friends, students and hospital staff who attended, but it was an important reminder of how powerful music can be.

“I want to live my last days on my terms,” David says. “With music, and family and love. And that’s the most important thing for me.”

David plans to spend his remaining time enjoying the company of his family and friends, and listening to beautiful music.