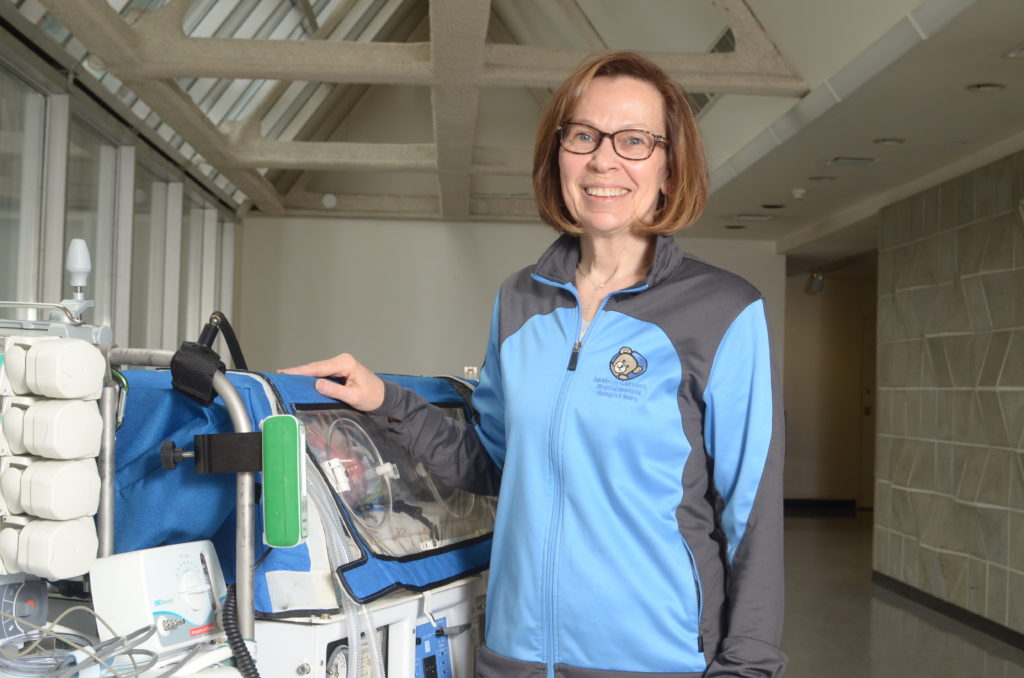 Sharing her wisdom with fellow staff

Hamilton Health Sciences (HHS) nurse Dawn Scales has a message to share with women ages 50-plus who consider themselves at low risk of developing breast cancer.

“Make time for free mammograms through the Ontario Breast Screening Program (OBSP), even if you feel perfectly healthy, have no symptoms and no family history of the disease,” says Dawn, a Neonatal Intensive Care Unit transport nurse at McMaster Children’s Hospital who was diagnosed with breast cancer in August, 2015.

During the month of April, Scales shared her story with HHS staff at six hospital sites during lunchtime sessions organized by Shine Wellness in partnership with the Regional Cancer Program and CIBC Breast Assessment Centre.

“I feel very strongly about reaching out to other women and encouraging them to take part in the OBSP,” says Scales, 58. “Through mammography, women can find breast cancer in its early stages, when it’s easier to treat.”

“Life is busy, and because I didn’t think breast cancer was an issue for me I allowed several years to pass between screenings.”

The OBSP offers free screening mammograms to women aged 50 to 74 with no signs of breast cancer. It’s recommended that these women get a mammogram every two years since early detection through mammography can result in significant health benefits including increased treatment options and better survival rates.

What if she had kept waiting?

“Although I’m a nurse, breast health isn’t my field and I didn’t realize that most women with breast cancer have no family history,” Scales noted to staff at the sessions. “I considered myself at very low risk because no one in my family had ever been diagnosed.”

She also ate well, exercised regularly and maintained a healthy body weight. “I even breastfed my three children, and research shows that breastfeeding protects against breast cancer.”

“If I had waited longer for my mammogram, the outcome could have been much worse.”

Her first mammogram at age 51 showed no signs of cancer. But instead of returning two years later for another screening, she waited five years until booking her next appointment. “Life is busy, and because I didn’t think breast cancer was an issue for me I allowed several years to pass between screenings.”

It was her second mammogram, in 2015, that found breast cancer in its early stages. “I’m so grateful that it was caught early. If I had waited longer for my mammogram, the outcome could have been much worse.”

The hardest part about being diagnosed was telling her family. “But because my cancer was caught so early, at least I could tell them I expected to be okay.”

Recovered, and spreading the screening message

Dawn was treated with surgery and radiation at Juravinski Hospital & Cancer Centre. “I recovered quickly from surgery and did well through radiation treatments,” says Scales, who credits her healthy lifestyle for helping with treatment and recovery, along with the excellent care she received from her healthcare team.

For more information on the OBSP, including locations right here at HHS, please visit hnhbscreenforlife.ca