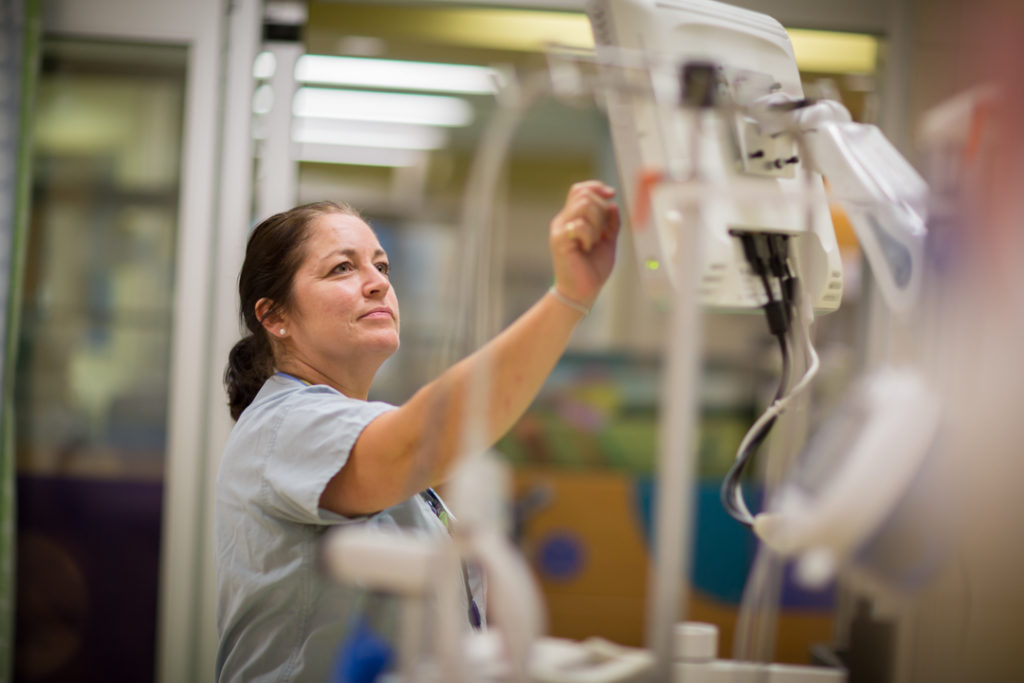 Cathy was working as a transport nurse in the Pediatric Intensive Care Unit (PICU) at McMaster Children’s Hospital when she realized she was in an abusive relationship.

“I had this incredible job full of respect and autonomy and I would go home to the exact opposite,” she recalls.

Her husband at the time was manipulating her financially. He was verbally abusive and refused to complete home renovations he had started as a way of asserting control. It wasn’t until August 2010 when they were driving back from a family outing that she finally allowed herself to acknowledge the abuse.

“He was turning the car off while I was driving and trying to grab the wheel,” she remembers. “I was terrified. When we got home and he got out of the car, I pulled back out of the driveway. He jumped on the car and tried to chase us out.”

Cathy and her kids slept the night in an office she had access to. The next day, she called the police and went home. Her husband kicked the bathroom door in. She took the police officer’s advice and called a domestic violence crisis line.

“She said I should leave right away and come to the shelter. Because I had called the police and he was angry, my life was at risk.”

Cathy took a leave of absence from work. She and her children lived in shelters for six months before getting a spot in geared-to-income housing. Over time, she rebuilt her life and returned to work in 2013. She still works in the PICU taking care of critically ill children, and has gone on to become an advocate for survivors of domestic violence, creating an organization called 1inFour.

“I had this incredible job full of respect and autonomy and I would go home to the exact opposite.”

Perhaps because of her lived experience, or because she’s known by her peers as a good listener, Cathy sometimes hears from other staff members who are experiencing domestic violence. She’s thrilled that she will now have a clear path to lead them down. “We’re trying to create a culture of safety for staff, patients and visitors,” says Susan Fuciarelli, director of Health, Safety and Wellness at HHS. “This component of our overall workplace violence and harassment prevention program is an important part of shifting that culture.”

To this point, managing concerns about domestic violence in the workplace has been approached case by case. The protocol formalizes the process so that everyone is equipped with clear guidelines for supporting a colleague who is experiencing domestic violence.

“Statistically, one in four women will experience intimate partner violence,” notes Diana Tikasz, a social worker in the Sexual Assault/Domestic Violence Care Centre at HHS. “As a large organization with many female employees, we are naturally going to have large numbers of staff that experience this. That’s why it’s good to have a protocol to guide us. It can be a very emotional thing and this protocol provides clarity.”

The protocol establishes how leaders should respond when they learn that a staff member is experiencing domestic violence. It also outlines how to create a workplace safety plan with hospital security and which resources to provide.

“When someone is experiencing domestic violence,” says Tikasz, “they really need a wrap around support system for their safety. Work is an important part of that.”

“By formalizing the process, it provides support to the staff member, but it also gives the leader the support they need to address the situation appropriately and confidentially, and to bring in the right resources,” Fuciarelli adds.

Tikasz, Fuciarelli and Cathy are all hopeful that the protocol will reduce stigma by raising awareness about how common domestic violence is, and in turn make it easier for people to come forward.

“It’s an entirely new thing for this to be normalized in the workplace,” Cathy says, applauding HHS as a leader in this area. “In my case, I don’t think people knew what to do. It’s not that they didn’t want to help, they just didn’t know how. This will help people get the support they need to feel safe at work.”