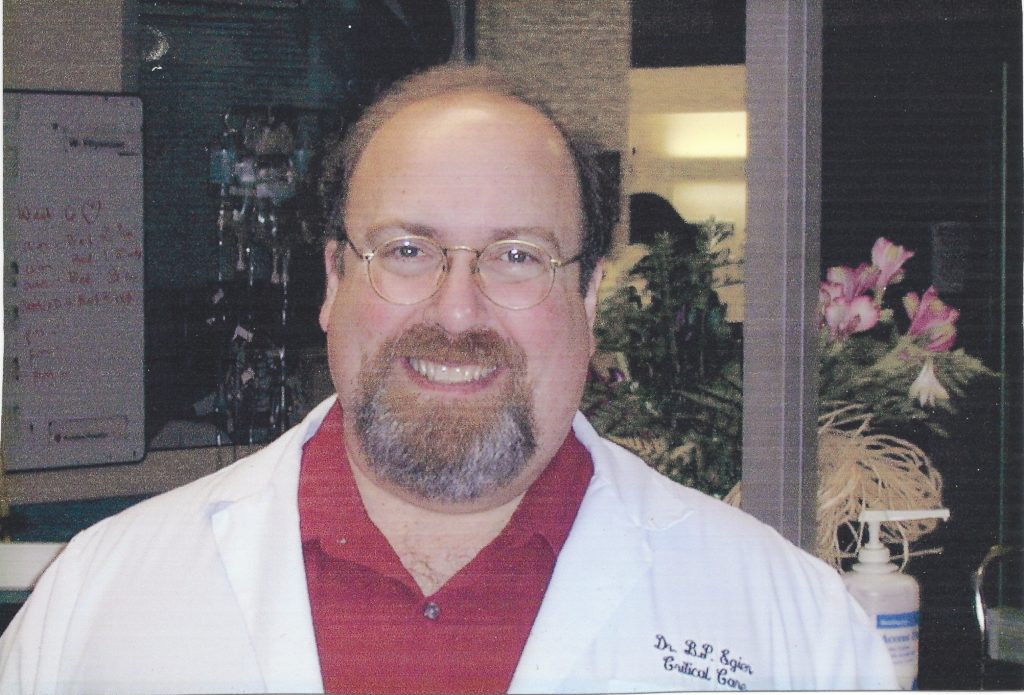 When he began his work as an anesthesiologist, the idea of a good death didn’t exist in the same way it does today. But he listened carefully to what his patients wanted. He asked about their desire for advanced measures like CPR and breathing support if their heart were to stop. If they said no, he helped communicate those wishes to their family, so everyone understood the patient’s desires.

“Nobody did it like he did,” says his wife. “He would work very hard to get everyone on board for the patient to have a good death.”

The doctor becomes the patient

Dr. Egier became sick himself about ten years ago. He had been feeling under the weather for a while, and as he prepared for an overnight shift on call, his wife Ro worried how he would fare. But he was devoted to his patients and colleagues. He was too weak to drive, so Ro drove him in. During that shift, his symptoms started to get worse.

“He got to die in his own ICU”

He ended up in the emergency department. He was in septic shock—his body was shutting down. Scans revealed a giant tumour growing on his bowel.

“It snowballed from there,” recalls Ro. “He never did return to work after that.”

Dr. Egier lived with cancer for several years. In the fall of 2017, he was admitted to the ICU at HGH, where he had spent so much of his working life.

“He got to die in his own ICU with all his best people around him,” says Ro. “His hospital family was awesome. I can’t thank them enough.”

Honouring his passion for a good death

Dr. Cindy Hamielec, Dr. Egier’s friend and colleague in the ICU, organized a fundraising effort in his honour.

“He was always there for people to talk to,” she says. “He was a role model for so many of us, and we wanted to recognize him.”

The group has donated more than $15,000 to a special fund at that was established with Hamilton General Hospital Foundation in Dr. Egier’s name to benefit ICU patients. A portion of the funds were used by the ICU’s End of Life Committee to furnish a second ‘end of life room’ for patients and families. The room is decorated with calming features, like decals of trees and birds on the walls, and artwork of outdoor scenes. It includes a couch for family members to sit or sleep on. It’s intended to feel less like a hospital room so patients can have the best death possible. “Families tell us how peaceful and home-like it feels,” says Edita Hajdini, part of the ICU’s End of Life Committee. “They like the fact that the unit has taken time to think about their needs.”

When patients are nearing end of life in the ICU, they can be moved to the room if it is available. In addition to giving the family more space to be together, the room is a reminder to staff and other visitors that someone is in their final hours. It helps to create a sense of calm on the busy unit.

Dr. Egier’s family feels it is the perfect way to honour a man who cared so deeply for his patients.

“It was important to him to help people die with dignity,” says Ro. “Through this room he continues to do that.”

Donations can still be made in Dr. Egier’s name to support ICU patient care at https://hamiltonhealth.ca/memorialgiving/