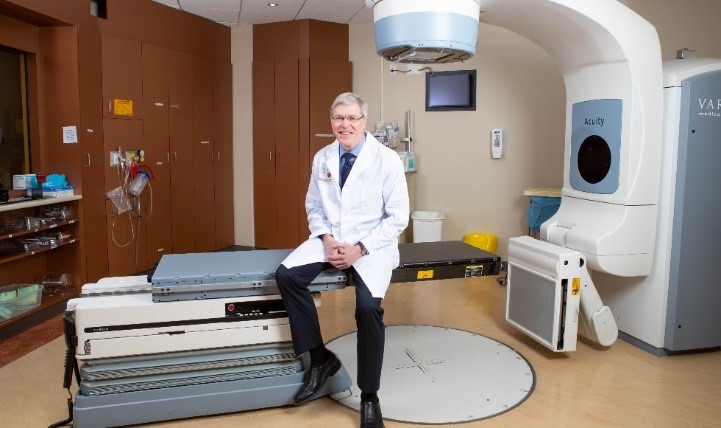 The Canadian Cancer Society presented Dr. Timothy Whelan with the O. Harold Warwick Prize at its 2019 research awards celebration. The prize is given for outstanding achievements in cancer control research and recognizes Dr. Whelan as a world leader in radiation therapy for breast cancer.

“My team and I have been involved in radiation research for over 25 years, so it’s a tremendous honour to be selected for this award,” said Dr. Whelan, radiation oncologist at Hamilton Health Sciences’ Juravinski Cancer Centre and professor of the Department of Oncology at McMaster University. “Radiation clinical trials can be challenging because they can often take up to 10 years, so that’s a considerable amount of time and effort. We’ve had a lot of successes and changed clinical practice, and it’s wonderful to be recognized.”

Throughout his career, Dr. Whelan has focused on conducting rigorous clinical trials to test new treatment strategies and technologies to guide clinical practice. Chief among his contributions is a Canadian clinical trial that Dr. Whelan led in the 1990s that showed that giving a larger dose of radiation per day over a shorter period of time was as effective and safe as the previous standard of a lower dose of radiation over a longer timeframe. A shorter course of radiation requires fewer visits to the hospital, making it more convenient for people with breast cancer and less costly for the healthcare system. Thanks to Dr. Whelan’s ground-breaking work, the shorter radiation schedule is now the standard of care in Canada and around the world.

In another influential study, Dr. Whelan led an international clinical trial that found that the addition of regional node radiation after breast-conserving surgery and standard whole breast radiation reduced the risk of breast cancer coming back and spreading, leading to the strategy being adopted into clinical practice in Canada and abroad.

Dr. Whelan has also led the development of a visual aid called a decision board to improve communications between clinicians and people with breast cancer. By providing information about treatment choices, outcomes and the likelihood of outcomes, the tool allows people to be actively involved in the decision-making process and make informed choices about their treatment.

Dr. Whelan’s body of work has fundamentally improved care for people with breast cancer by changing how radiation therapy is delivered and how people are consulted during the process. As a result of his efforts, more people with the disease are living longer and fuller lives.