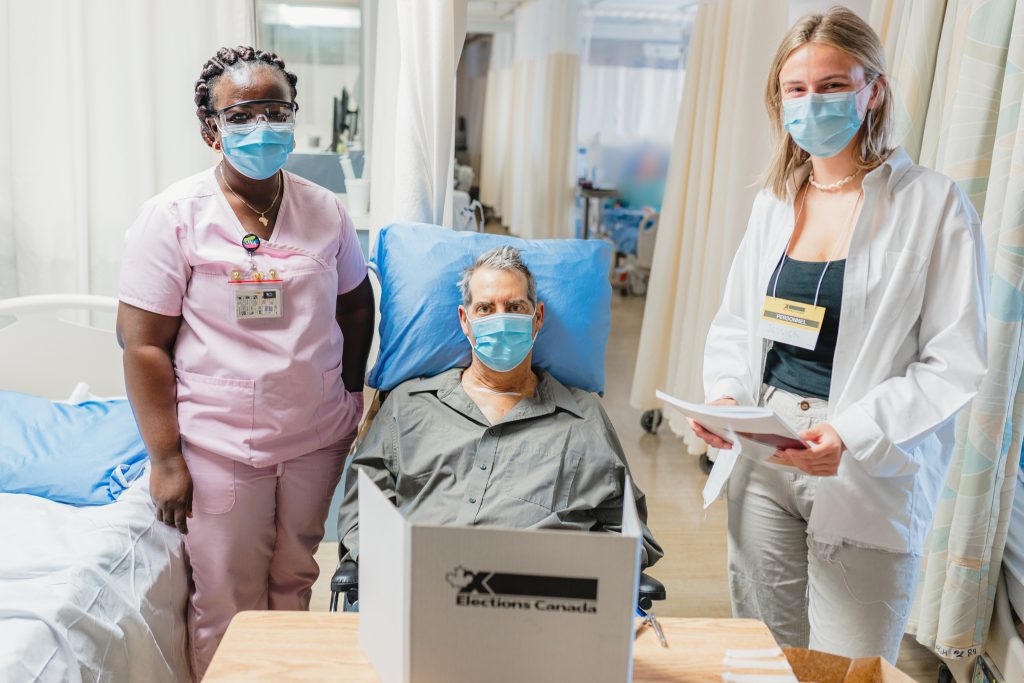 Cardiac patient David Veri is able to vote in the federal election from his hospital bed thanks to a longstanding partnership between Hamilton Health Sciences (HHS) and Elections Canada. Pictured with him are HHS registered nurse Margaret Adjei (left) and Elections Canada representative Jessica Doman (right).
Stories

Hamilton Health Sciences (HHS) patient David Veri has voted in every federal election since he was 18 years old. So when Veri, 58, found himself in HHS’ Hamilton General Hospital (HGH) this month for an extended stay after heart surgery, he wondered how he would manage to vote in the Sept. 20 election.

“I believe it’s extremely important for voters to have their say,” says Veri, of Caledonia. “There are people in the world who are literally dying for the right to vote.”

Fortunately, Veri was able to cast his ballot from his hospital bed last week thanks to a longstanding partnership between Elections Canada and HHS. The partnership, made possible by legislation, allows Elections Canada staff to visit hospitals across the country so in-patients can cast special ballots – an early voting option. 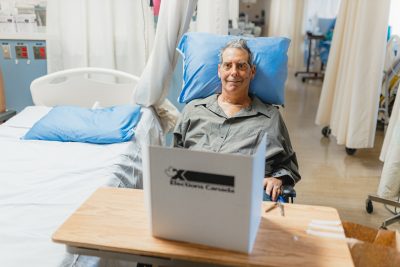 HHS patient David Veri is passionate about exercising his right to vote.

All HHS hospital sites, including HGH, provided the opportunity for Elections Canada representatives to bring advanced voting to in-patients in their hospital rooms.

“I’m confined to a bed because I’m not strong enough to start walking yet,” says Veri, who anticipates being hospitalized for at least another month.

“We congratulate Hamilton Health Sciences for everything they are doing for their patients during this General Election.”

At hospitals across the country, where health and safety policies allow election officers to be on site, patients can vote by special ballot from their hospital room. 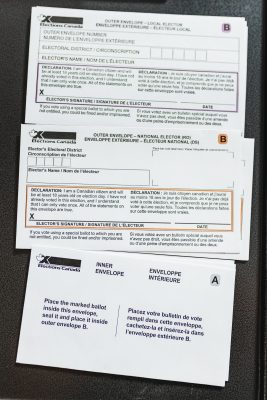 All HHS hospital sites, including HGH, provide the opportunity for in-patients to vote.

“We want to ensure that all eligible in-patients have the opportunity to exercise their right to vote,” says Amy Williams, HGH’s site administrator and director of regional trauma, emergency and critical care.

In-patients received a letter on their food tray explaining the process and voting eligibility. It included a place for patients to indicate their intention to vote during one of the hospital’s advance polling dates in mid-September. The unit’s charge nurse then collected letters and compiled a list of patients who wished to vote.

Veri, a retired mobile crane operator, is accustomed to voting in advanced polls, though this is the first time that advanced polling has come to him.

“I worked all over southern Ontario and never knew where I’d be on Election Day so I often voted beforehand. It’s important to me that my vote gets counted at the right place and at the right time. If you don’t vote, you have no say.”