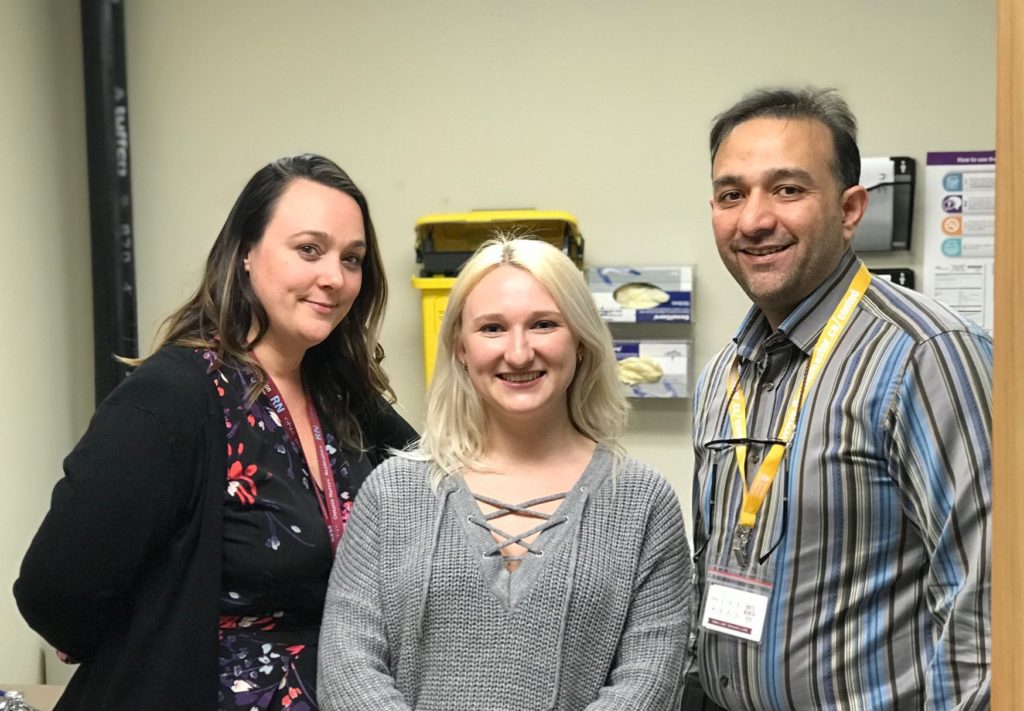 Epilepsy pressed pause on Katie McMurrough’s life when she was 20 years old. The Burlington resident was gearing up to train as a carpenter and had an active social life.

Katie was diagnosed with epilepsy shortly after her first grand mal seizure. She was prescribed different medications and her team of healthcare professionals was trying to figure out the right combination to stop her seizures without causing unbearable side effects.

During a transition between two medications, Katie collapsed again.

“I was working as a kitchen designer and collapsed at a client’s house,” she says. “They took me to the emergency department at Juravinski Hospital and I was referred to Dr. Attar.”

“It can be frustrating for a young person”

“It can be frustrating for a young person like Katie to get this diagnosis and then deal with the process of finding the right combination of medications,” says Ashley. “Having to combine multiple medications can also lead to negative side effects.”

Together, Katie and her care team worked to find a combination of medications that would reduce her seizures without causing too many ill effects. They had some success, and Katie was seizure free for a whole year in 2016. She went to school for carpentry with hopes of launching her own renovation business.

“It was great to get my independence back,” Katie says.

Ultimately, Katie’s seizures returned. On Canada day last year, she had another major seizure. She was feeling sick the evening of June 30th and accidentally fell asleep without taking her medication. Her basset hound, Ben, began howling in the morning, and her parents came running. Katie was in her room, having another grand mal seizure.

Katie, her family and her care team decided to start exploring alternative treatments. Dr. Attar and Ashley raised the possibility of surgery to remove Katie’s right temporal lobe. That’s right—part of her brain. Katie’s seizures originate in this portion of her brain, and removing it could greatly improve her epilepsy.

Surgery to remove part of her brain?

“Surgery is indicated as she has failed to respond to multiple medications,” says Dr. Attar. “Surgery will give her about 60 per cent change of seizure freedom. In addition, she may be able to decrease some of her anti-seizure medications which will decrease the side effects she is experiencing.”

To determine whether she is a candidate for surgery, Katie had to undergo a series of tests, including a ten day stay in the epilepsy monitoring unit at Hamilton General Hospital. During her stay, she was weaned off her seizure medications and hooked up to wires to determine where exactly in her brain the seizures were starting. She also did tests to determine which parts of her brain control her language and other important functions.

“I was so relieved when I found out that my language centre is on the left side of my brain,” says Katie.

That important fact means the removal of her right temporal lobe shouldn’t affect her speech or language processing. She was originally nervous about the prospect of surgery, but has become comfortable with the idea and is eager to learn whether she can go forward with the procedure.

Doctors at Hamilton Health Sciences don’t perform this surgery, so Katie’s case has been presented to doctors at another hospital for consideration. If they approve her, she will live the rest of her life without a portion of her brain.

It sounds like a scary choice, but for people with epilepsy, it can provide a much better quality of life when their other options have run out.

“This would increase her satisfaction and quality of life,” says Ashley. “It will also allow Katie to return to her every day activities and pursue goals that have been on pause temporarily as her seizures worsened.

Dr. Attar and Ashley are optimistic about Katie’s surgery. Together, the three of them are eager to raise awareness about epilepsy and erase the stigma of this disorder.

“Epilepsy is not contagious,” says Ashley. “Most people who have it can work and have a family.”
Katie sees herself accomplishing these goals with the help of her family and care team. She is optimistic about being able to drive again, and expanding her home renovation business.

She’s ready to press play on the rest of her life.

There are many types of seizures. To learn more about the different types and how they appear, click here.

• If someone is having a seizure, don’t panic
• Do no place anything in their mouth!
• Don’t try to restrict their movement, as this could harm them
• Roll them onto their size in the recovery position once they have stopped seizing