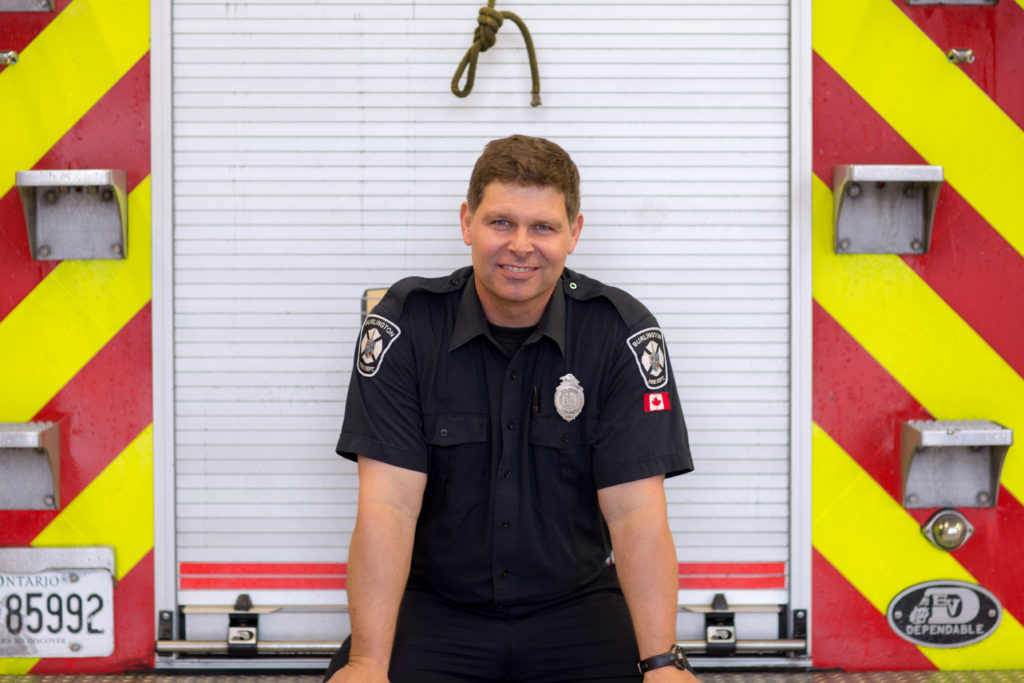 When a first responder needs help

In his 33 years as a firefighter, Rich Dykes has been the first on scene to thousands of calls. From house fires to car accidents to medical incidents, he’s knelt at the side of many patients in their greatest times of need.

He never thought he’d be one of them.

On New Year’s Eve 2016 Rich was at home in Dundas, On. with his wife, Anne when he noticed unusual pain in his neck and arm. Having just spent the day playing football with his friends, he chalked it up to a rough day on the field and drew himself a bath to help soothe what he thought were tired muscles.

It wasn’t until Rich was standing in his kitchen – just an hour or so later – that he realized he was experiencing more than just muscle pain. Dizziness struck him unexpectedly. He had odd sensations in his ear. But it was when he lost control over his right arm that Rich was fairly certain he knew what was happening to him. He’d seen the signs time and time again on the job.

“I think I’m having a stroke,” he said to Anne, who immediately called 9-1-1 and unlocked the front door. Within minutes, Hamilton firefighters and paramedics were kneeling beside Rich – now without feeling in his legs or the ability to speak – on his living room floor.

“It was frustrating not being able to talk and describe my symptoms,” said Rich. “But once they loaded me up in to the ambulance and the paramedic gestured ‘five minutes to Hamilton General’, I felt relieved.”

“They saved my life that day.”

At Hamilton General Hospital (HGH), the regional stroke centre, emergency stroke and interventional teams worked quickly to give Rich two life-saving treatments. First, he received a drug called “tPA” which works to dissolve or break down the blood clot causing the stroke. Second, he went through a new procedure called endovascular therapy – or “EVT” – where doctors remove the clot from the brain by feeding a catheter up to the blood clot through an artery in the leg In Rich’s case, a clot had formed at the back of his neck and was affecting the flow of blood to his brain.

Within an hour, the effects of the stroke began to reverse. With Anne by his side, Rich “silently celebrated” every time he regained a sensation or movement he had so suddenly lost just hours before. He could wiggle his toes. He had feeling back in his arms. Finally, he could speak again.

“When that happened, I knew I wasn’t going to be in a wheelchair, and that was a great feeling.”

Rich spent two days in the neurosurgical stepdown unit and two more on the stroke unit at HGH. By his fifth day in hospital, Rich’s care team cleared him to go home. By April 2017 – just three months later – he was back to work at Burlington Fire Department.

Had he not recognized his symptoms when they first arrived – that dizzy moment standing on his kitchen floor – Rich may have had a very different outcome. His quick action made him eligible for the brain-saving treatments that he may not have received if he had waited to call for help.

But, in true first responder fashion, Rich is humble. He has others to thank for his incredible recovery.

“I can’t express enough gratitude to the hospital staff, paramedics, firemen, and my wife Anne.

They saved my life that day.”

If you think you or someone around you is having a stroke, call 9-1-1 immediately.

Watch this video on recognizing the signs of stroke.