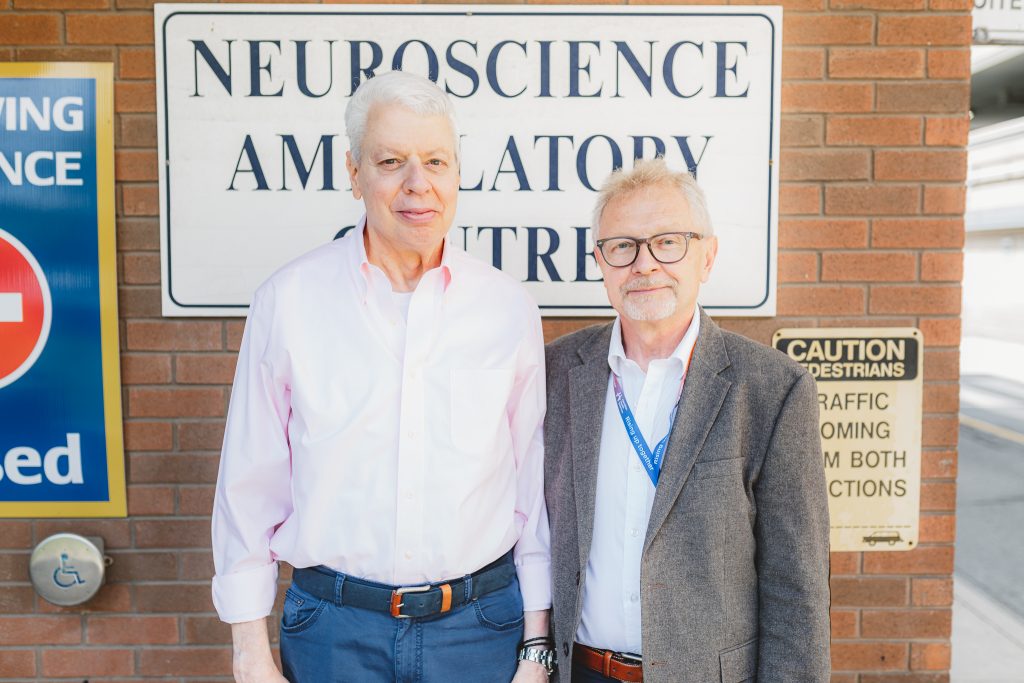 Retired Hamilton lawyer Mark Scholes (left) has been best friends with HHS neurologist Dr. Wes Oczkowski for four decades. For a short time during that long friendship, Mark was also a patient.
Stories

Hamilton Health Sciences (HHS) is saying goodbye to Dr. Wes Oczkowski, who retires this month after an illustrious 40-year career as a neurologist specializing in stroke and rehabilitation.

But one of his patients, Hamilton lawyer Mark Scholes, will see much more of Wes now that he’s retiring.

Mark and his wife Kathy Scholes have been best friends with Wes and his wife Dr. Allyn Walsh for 40 years. That’s as long as Wes has been practicing medicine.

Allyn’s friendship with Mark goes back even further, when they became pals in grade school 60 years ago.

“Kathy and I are thrilled to wish Wes well in his retirement.” — Mark Scholes

Wes is the last in this quartet of best friends to retire. Kathy left her job in banking first, followed by Allyn who was a professor at McMaster University’s department of family medicine, then Mark and now Wes. Though retired, Mark continues to be a partner in the Hamilton law firm, Weisz Rocchi & Scholes.

The couples attended each other’s weddings in the early 1980s, ran in the same social circles and even vacationed together. It was during one of those trips – a 2016 holiday in France –that Wes suspected something was wrong with Mark’s health.

Today was my husband’s last clinic before he retires. The last patient was our very dear friend of many decades. 41 years of patient care, mostly at ⁦@HamHealthSci⁩, & academic work with ⁦@machealthsci⁩. Glad to have been your companion along the way, Wes Oczkowski! pic.twitter.com/uXj7pDGTmv

“Wes noticed that Mark seemed weak when he was walking,” recalls Kathy. “The warmer the temperature got during the day, the weaker Mark became.”

There were other symptoms too, adds Mark. “I would start to feel disoriented.”

Wes suggested that Mark book a medical appointment with him once they got back to Hamilton. But just two days after returning home, Mark collapsed and was taken to HHS Hamilton General Hospital (HGH) and admitted.

Caring for a friend

Wes became Mark’s neurologist, and referred him to an HHS cardiologist who diagnosed him with a malfunction of the autonomic nervous system which controls functions like heart rate, blood pressure, digestion, kidney function, and temperature control.

People with this condition can experience symptoms including lightheadedness, fainting, unstable blood pressure, abnormal heart rates and malnutrition. In severe cases it can be fatal.

“There was never any talk about Mark’s medical condition when we’re together socially,” says Kathy.

The four friends each made a plan for their retirements. Mark and Kathy want to travel, though that will depend on Mark’s health. Allyn studied to become a master gardener when she retired, and Wes is taking up new interests like learning to play guitar and cook gourmet-level meals.

“Kathy and I are thrilled to wish Wes well in his retirement,” says Mark. “He has had an incredibly accomplished career, and Hamilton Health Sciences will certainly miss him. But Kathy and I are looking forward to spending even more time with Wes and Allyn.”