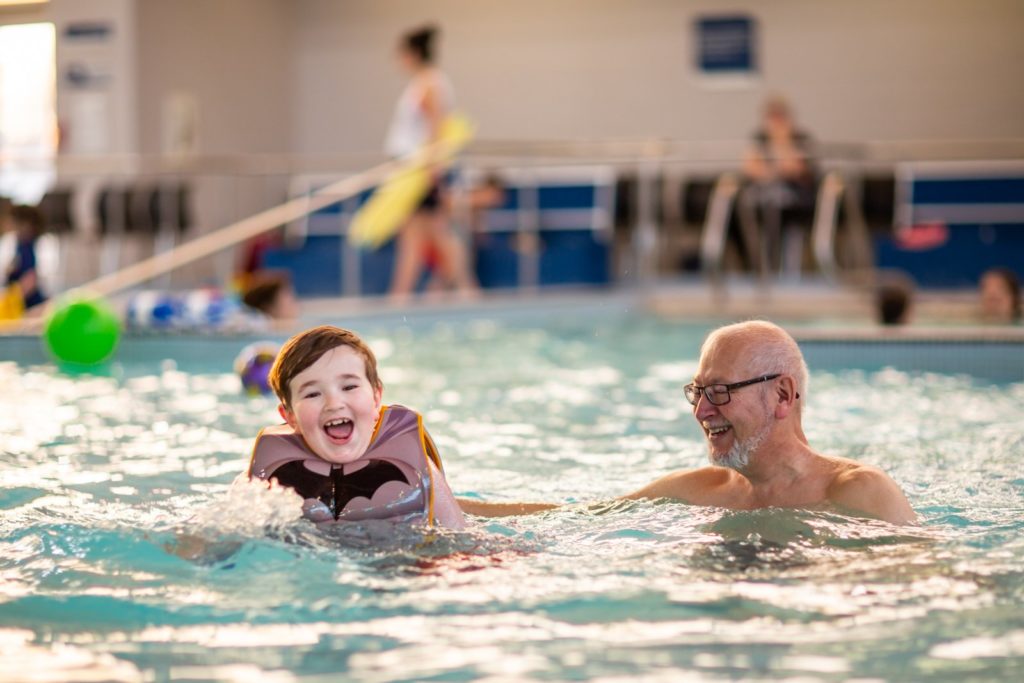 RJCHC helps kids Get Wet ‘N Fit in the pool

Swimming is one of 7-year-old Wesley David’s favourite things to do.

Since he was five, he has been participating in triathlons: swimming with his life jacket, cycling on an adapted bicycle, and using his walker for the running portion of the race.

Wesley was diagnosed with a brain tumour at 13 months old. He later had a stroke related to his treatment and has had ongoing physiotherapy ever since.

His physiotherapist at Ron Joyce Children’s Health Centre (RJCHC) heard about his hobby and suggested he get involved with a new program called Get Wet ‘n Fit. Get Wet ‘n Fit is a community-based pool program for clients of RJCHC with diagnoses including but not limited to muscular dystrophy and cerebral palsy. The six-week program was held in partnership with the City of Hamilton at Westmount Recreation Centre.

The program was initiated by physiotherapists KC Chavez and Janet Mannen and occupational therapist Brooke Wardrope in the Developmental Pediatrics and Rehabilitation (DPR) program at RJCHC and supported by volunteers. Volunteers allow more children to access these programs by providing one to one support in the water.

“Overall, there is a mutual benefit as volunteering not only enriches our services, but provides meaningful experiences for those who give back,” said Brooke.

Morgan Lewandowski was one of the volunteers who expressed gratitude for being able to participate in the program. She said, “It made me happy to see all of the children having so much fun as well as getting so much exercise. This was one of the most impactful experiences I have had so far and I am beyond lucky to have been a part of it.” Volunteers like Morgan enriched the program and were provided with a meaningful experience.

During the program, children worked through their treatment plans as well as group exercises like stretching, range of motion exercises, and some cardiovascular conditioning.

“Each child had individualized goals to progress through which were developed based on their functional levels. A balance challenge was conducted in the first and last sessions to assess stability and strength against challenging variable currents,” said Brooke.

“Group activities provided an opportunity for children to interact with each other and develop peer relationships.”

Wesley’s grandpa Lark can attest to the benefits of the program. He was often in the water with his grandson, while grandma came to watch. “The program got the kids excited and that excitement promotes exercise. That exercise is the therapy they are looking for,” said grandpa.

Since starting the program, Wesley’s balance has improved as well as movement in his legs. Plus, he gets more physical exercise with the assistance of the water.

Wesley’s grandma Connie said it was wonderful to watch Wesley in the pool because he was able to walk, run, splash, and play without the use of his wheelchair or walker.

Although the program has completed until the next session dates are released, grandma and grandpa still take Wesley to Westmount Recreation Centre’s “family swim” to make use of the location’s accessible features.

Wesley gets to spend quality time with his grandparents while getting the added benefit of physiotherapy – all the while enjoying one of his favourite activities. It’s a win-win.