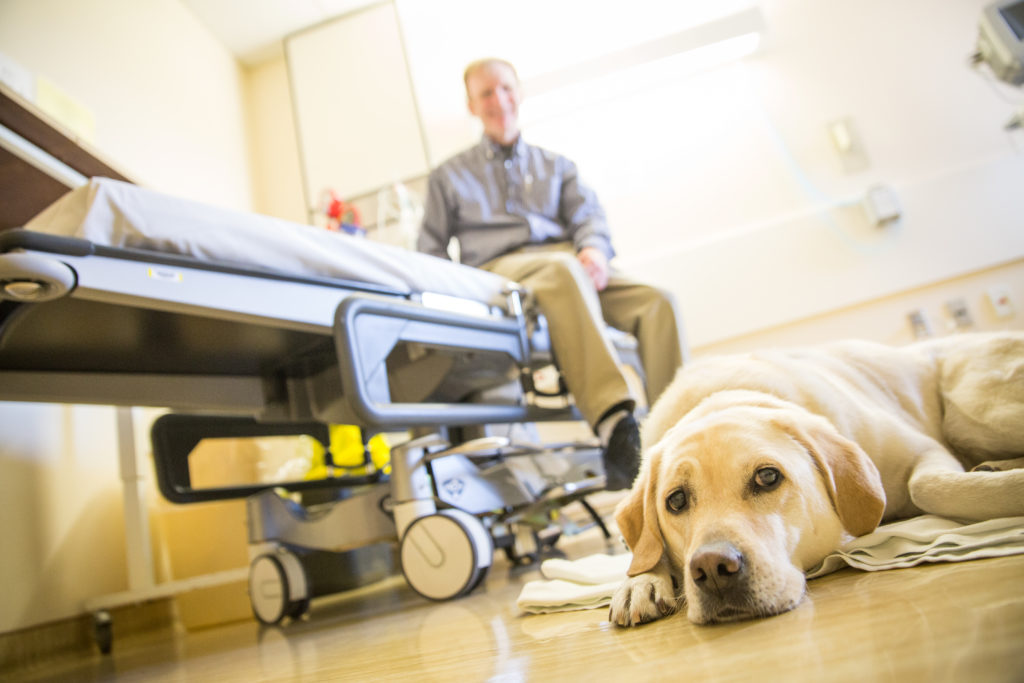 Brent and his guide dog, Kilo, are rarely apart. She has been with him steadily in the four years since her training with Lion’s Foundation of Canada Dog Guides. With only 11 per cent remaining in his field of vision, Brent relies on Kilo to get around safely. They also share a special emotional bond. “We’re partners, big time,” Brent says, “she looks after me and I look afterher.”

So when he was admitted to Hamilton General Hospital (HGH) with severe headaches, it was difficult to leave Kilo behind. Anticipating he would only be there for a day or two, he asked a friend to look after the 5-year old lab. But knowing his constant companion was distraught and searching for him in their apartment weighed on Brent, “home to her isn’t at home. It’s wherever I am.”

Brent decided Kilo should come stay with him during his time at HGH. When his sister arrived with Kilo in tow, the dog promptly began searching for her best friend. Brent says the normally docile dog jumped right up on his bed and slathered him in kisses, “it sure made me feel loved. I was so happy to see her so happy.”

“It brought happiness to our ward. Not just for staff, for other patients too.”

Being the first service dog to stay on the neurosciences unit at HGH, Kilo required some special accommodations, but she was welcomed with open arms. Several staff members took her outside several times a day and kept an eye on her when Brent was undergoing procedures. “It was amazing having Kilo here,” says Corrie Jerome, a clerk who helped care for Kilo, “It brought happiness to our ward. Not just for staff, for other patients too.” Clinical manager, Keisha Jack, says her team didn’t give a second thought to finding time for Kilo in their daily routine, “Kilo is integral in maintaining Brent’s independence in the real world. Our staff recognized that Kilo would have to be cared for in order for Brent to return to this independence once his neurosurgical needs were met.”

During Brent’s two and a half week stay, Kilo developed a special relationship with staff and patients. She had a calming effect on the unit and added sparks of brightness to long and often challenging days. Brent required surgery to repair an old reconstruction of his skull that was contributing to his headaches. He was glad to have his faithful dog by his side during his stay at HGH, “Kilo is a big part of me, including an extension of my eyes. I truly appreciate the amazing attention and care we received.”

While they’re thankful for Brent’s kind words, the staff on 7 West think they did what any team at Hamilton Health Sciences would do. Caring for Kilo was simply part of caring for Brent.