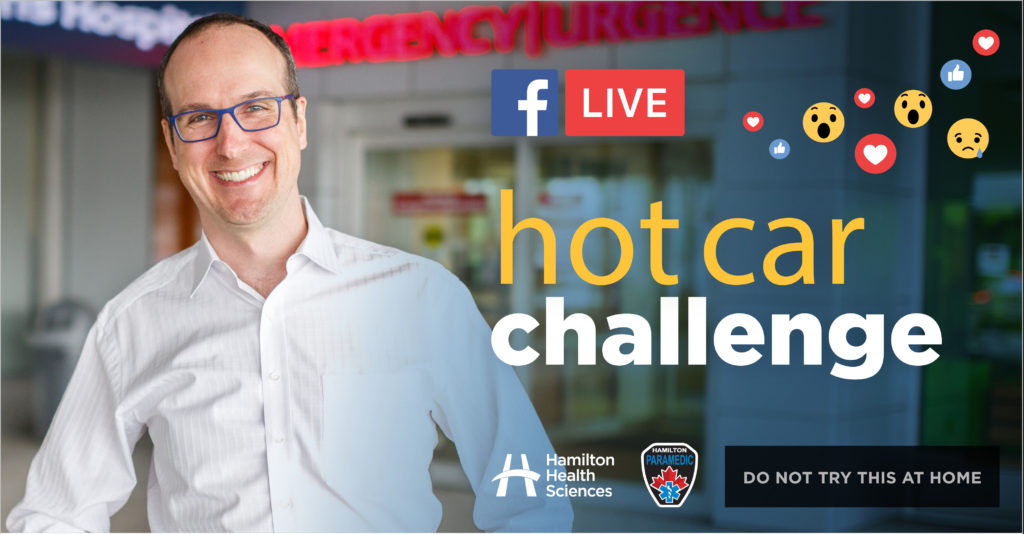 The  acting medical director of pediatric cardiology at McMaster Children’s Hospital is urging parents to never leave their children in the car on a hot day. To reinforce his message, he put himself a child’s shoes—or more specifically their seat.

Dr. Anthony Crocco challenged himself to sit in the backseat of a hot car to demonstrate the dangerous effects this can have on young children. He broadcast the experience live on the Hamilton Health Sciences Facebook page, drawing an audience of thousands.

“It doesn’t take long to overheat in a hot car,” Dr. Crocco says. “Even less so for children. Even in moderately hot weather, in the time it takes to go get a coffee or run an errand a child can become dangerously overheated. That’s why we felt it was so important to share this message with the public.”

“Because their bodies are smaller, the time it takes for them to get overheated and dehydrated is much less.”

The livestreamed event began with paramedics from Hamilton Paramedic Service taking Dr. Crocco’s vital signs and explaining some of the medical risks of heat exposure. The doctor then entered the car where he described his experience as the temperature inside the vehicle climbed. When he got out of the car about 15 minutes after entering, the thermometer inside read roughly 40 degrees Celsius.

Dr. Crocco noted that some of his symptoms, including sweating, dry mouth, quickened breathing and lethargy would be magnified in kids.

“Because their bodies are smaller, the time it takes for them to get overheated and dehydrated is much less.”

During his time in the car, Dr. Crocco’s vital signs deteriorated very slightly. He noted that had the weather been sunnier, the temperature of the car could have risen higher than 60 degrees Celsius, causing much more significant changes. Changes to vital signs are an early indicator of more serious complications that can occur when kids are left in hot cars, such as organ failure.

“The biggest way we modify our temperature is to change behaviour,” Dr. Crocco says. “We do that by removing clothing, moving to the shade, drinking water, turning up the air conditioning. Children who are strapped into a car seat don’t have the option of changing their behaviour to cool down and that’s why it’s so dangerous.”

Dr. Crocco says this demonstration is certainly not something you should try at home, but under the supervision of paramedics, it was a meaningful way to convey an important message to the public. He cautions everyone to remember that even outside of cars, children are prone to heat related illness.

“During the summer, we should take extra caution to make sure kids stay hydrated and cool,” Dr. Crocco says. “If you ever suspect that your child is suffering from serious heat related illness, take them to your local emergency department.”

“So dangerous”: Hamilton doctor sits in hot car to warn you of dangers – The Hamilton Spectator