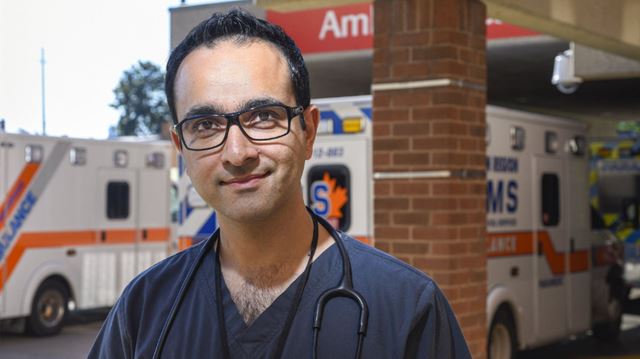 Photo courtesy of The Hamilton Spectator

Finding their footing in Canada

When Keivan Saeedi, a nurse from Iran, moved to Canada in 2012, he found that he needed a license to continue practising nursing. Saeedi tried to navigate the process, but found it frustrating. Then he met Daniela Beckford, a project manager and internationally educated nurse at Hamilton Health Sciences (HHS). It was one of the best encounters of Saeedi’s career.

“Before I found this program, I was discouraged by the process of getting my license.”

Beckford originally trained in Romania and moved to Canada in 2000. She has over 15 years of nursing experience in Canada. Drawing on her expertise, she encouraged Saeedi to apply for both the Registered Nurse (RN) and the Registered Practical Nurse (RPN) programs. Beckford’s advice helped Saeedi get his nursing license successfully and he is currently working at HHS as an RPN. Saeedi is also enrolled part-time at Ryerson University and hopes to graduate soon as an RN. “Before I found this program, I was discouraged by the process of getting my license,” says Saeedi. “Now, I’m able to practise in Canada, and I’m on my way to achieving my goal of becoming an RN.”

Coming to Canada from Philippines, Fhinel Lee also benefitted from Beckford’s experience. Beckford mentored her and within three months Lee got a job as a personal support worker at a private institution. Nine months later, she was hired by HHS and is now part of the Nursing Resource Team. Lee also volunteers as an informal mentor for other internationally trained nurses. She sees it as a way of giving back to the community.

Saeedi and Lee both met Beckford through the Internationally Educated Nurse (IEN) and English as a Second Language (ESL) Nurse Integration Project at HHS. She is one of a number of team members who guide and support internationally trained nurses as they build and develop their careers in Canada.

“The idea is to have all the important players in the integration and hiring of nurses at the table together.”

Spearheaded by HHS, the Project is funded by the Government of Ontario, Ministry of Citizenship and Immigration. It began in 2009 and in 2012, it was recognized with the HR Summit Award for the Employer Champion of Internationally Educated Professionals.

“The idea is to have all the important players in the integration and hiring of nurses at the table together,” says Beckford, Project Manager of the IEN/ESL Nurse Integration project at HHS. “Having a mentor within the Hamilton Health Sciences network gives internationally trained nurses a sense of community and belonging. This aids in the integration process.”

The project also employs a Nurses Nurturing Nurses module which is an informal mentorship program, based on a program developed by the Academy of Medical-Surgical nurses. It pairs a volunteer clinical integrator and an IEN/ESL participant, giving them an opportunity to learn about professional practice issues, integration, inclusion and cultural diversity. Participants benefit from mock-interviews and coaching sessions to prepare them for job interviews, as well as language and communication training, simulation of physical assessment skills and cultural competency module training.

Hamilton is one of the most diverse and multicultural cities in Canada, with more than 24 per cent of the population born outside of Canada.

Internationally trained nurses like Beckford, Saeedi and Lee are assets to their communities. Hamilton is one of the most diverse and multicultural cities in Canada, with more than 24 per cent of the population born outside of Canada. There is a need to provide culturally sensitive care to this diverse population.

“There are often situations where patients need nurses who know other languages and other cultures,” says Beckford. “Nurses have to step up and help, not only with patient care but with unique support to enhance the patient experience. The project helps contribute to the renewal of the workforce and brings valuable experience and innovative ideas to the table. Also when we hire internationally educated nurses and integrate them into the workforce, we help them integrate into our society.”

The project has proved to be a successful innovation within HHS thanks to vision and support from all levels of leadership. It has exceeded its employment and in-house nurse volunteer targets and increased the confidence and skills of its participants. HHS partners with CARE Centre for Internationally Educated Nurses, Mohawk College Institute for Applied Health Sciences, Hamilton Centre for Civic Inclusion, and the Nursing Health Services Research Unit of McMaster University for this project.