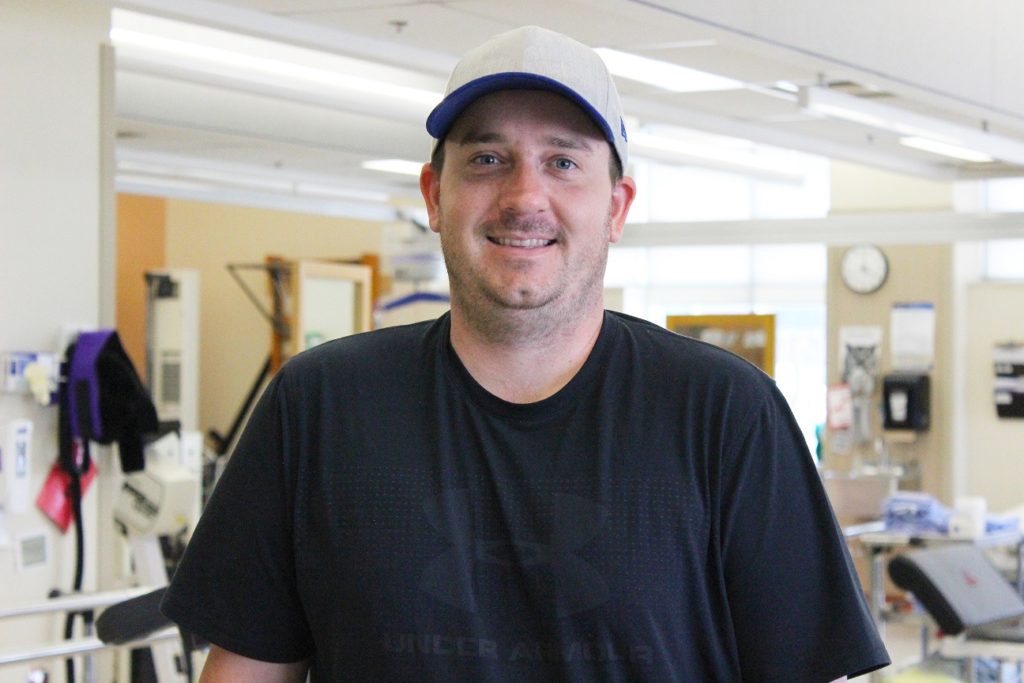 Striding on the road to recovery

What started out as an ordinary day on the job for construction worker Joey Hackett ended up becoming a nightmare that he will never forget. In October 2016, Joey was working with a crew that was grading a road in Hamilton when an 18-tonne grader backed over him.

“I remember everything and I was conscious during the whole ordeal,” he recalls. “I could hear my pelvis cracking and I could feel my left elbow explode from pressure. My left foot was a bag of bones, three ribs were broken and I suffered two fractures in my lower spine.”

Joey was rushed to the emergency department at Hamilton General Hospital (HGH), where the trauma team was ready for him. A breathing tube was inserted and he received a blood transfusion because of massive internal bleeding. After his injured spleen was removed and pancreas repaired, the team was able to stabilize Joey and medically induce a three-day coma, which helped his body to heal.

“My wife and my son kept me going and pulled me through it all.”

“That was just the beginning of the story,” says Joey. “Once I awoke from the coma, I underwent three more surgeries to repair the damage done to my body. Half of my pelvis is now metal and I’m full of pins and plates.”

During his two-month stay at HGH, he persevered through extensive physiotherapy and learned how to sit up again.

When Joey was finally discharged at the end of November 2016, he was overjoyed that he could finally rejoin his family, who were a major source of inspiration for him during the toughest parts of his journey.

“My wife and my son kept me going and pulled me through it all,” he says. “I always kept them in the back of my mind as I continued to push forward day by day.”

In March 2017, Joey began outpatient treatment at the Regional Rehabilitation Centre (RRC), visiting the gym for physiotherapy three times a week to help him regain mobility, strength and balance. He is now able to get around with the aid of a walker and he has regained the use of his fingers and elbow. His condition continues to improve every day and he refuses to lose hope in the face of adversity.

“Recovery is an uphill battle sometimes, but it’s a battle I’m glad to have. I wouldn’t be here if it wasn’t for the amazing people at HGH and the RRC. The care I’ve received is unbelievable and I encourage people to give back and support the hospital as donors because it makes a real difference in people’s lives.”

Joey took part in the 7th annual Strides For The General. For more information or to register, visit hamiltonhealth.ca/strides.