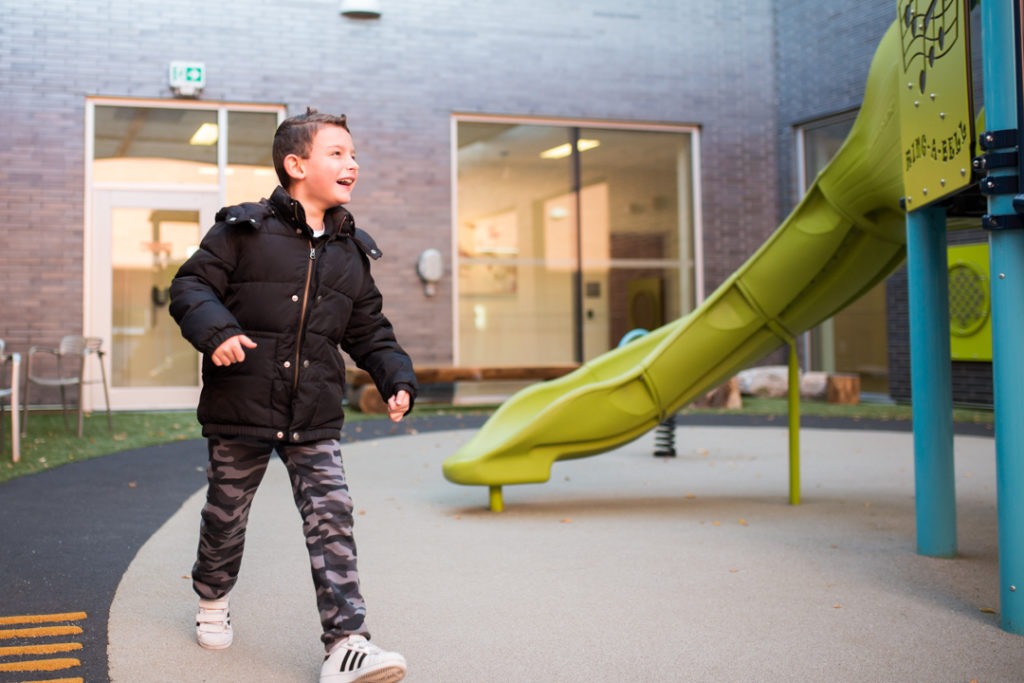 Climbing up to the top of a playground and slithering down a slide is a right of passage for many kids. For Josh, reaching the milestone took some coaxing.

“I just wanted him to have fun and explore and it was tough because he didn’t want to.” The eight-year old has autism and uses a Picture Exchange Communication system to indicate his needs and wants. He loves playing with toys, looking at books and running around outside. But until recently, he didn’t love the playground.

“He would just hang back and watch,” says his mom, Amy. “I just wanted him to have fun and explore and it was tough because he didn’t want to.”

Three days a week, Josh attends the Autism Spectrum Disorder Service at Ron Joyce Children’s Health Centre (RJCHC). He started as a patient at Hamilton Health Sciences’ Chedoke Campus, and transitioned to the new facility when it opened. Along with that transition came an opportunity to test out RJCHC’s world class playground. “During outdoor breaks, we encourage clients to be active and explore,” says Deana Kirkelos, Josh’s instructor therapist at RJCHC. “The play structure is a great opportunity for that. It allows kids to have fun while learning new skills.”

“When I give him a warning that it’s almost time to leave, he runs and hides at the top of the slide because he doesn’t want to stop playing.”

Josh’s therapists introduced him to the play structure slowly, first leading him up the stairs with one person on either side. After a few assisted trips down the slide, Josh discovered that he was able to do it on his own—and really enjoy it!

“He has developed a real interest in the playground and loves visiting it,” Kirkelos says. “When I give him a warning that it’s almost time to leave, he runs and hides at the top of the slide because he doesn’t want to stop playing.”

“I’m excited for him,” says mom, Amy. “It makes me really happy to see him enjoying it.” Ron Joyce Children’s Health Centre is celebrating its first birthday! The facility is home to 300 staff who see an average of 260 patients each day. Since opening, 52,000 patient visits have taken place at RJCHC.