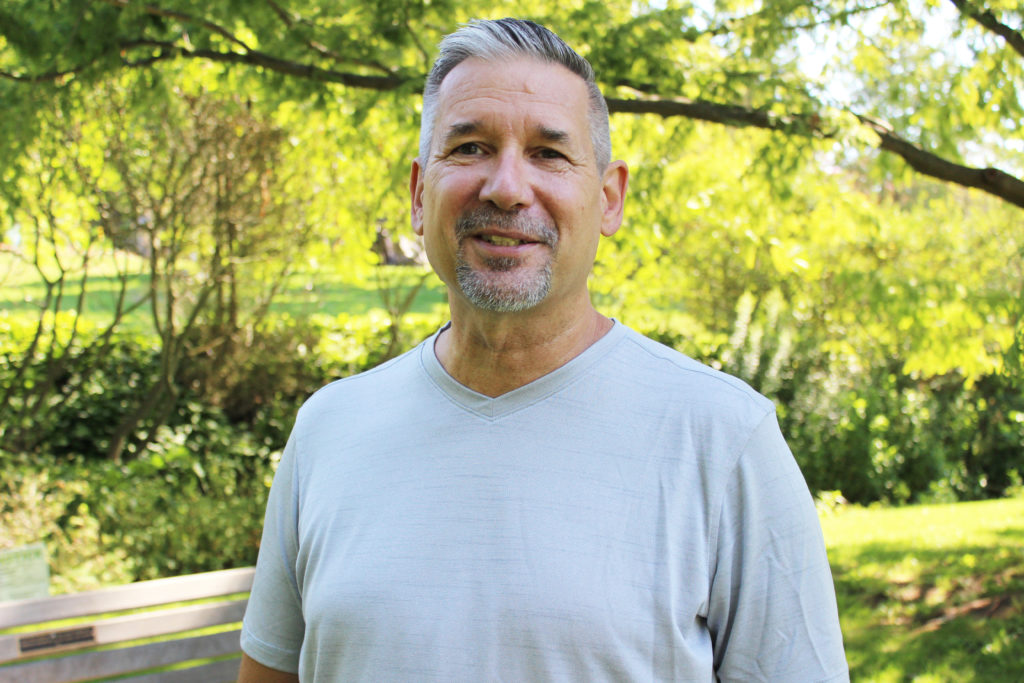 A Luminous Life After Leukemia

Kevin Kowalchuk lives his life to the fullest. He rode across Canada on a 10-speed bike when he was 18 years old. He has also hiked from Mexico to Canada and has climbed many mountains, including part of Everest for the making of an IMAX film.

“Being active and staying fit have always been a big part of my life,” says Kevin. “I don’t smoke and I have a fairly good diet, so it was surprising when I started to experience chest pains about a year and a half ago.”

Kevin visited his local hospital in Oakville, where it was discovered he had suffered a minor heart attack. Blood tests also revealed irregularities in his blood, which had an extremely low white blood cell count. He was transferred to Juravinski Hospital and Cancer Centre, where further testing led to a diagnosis of acute promyelocytic leukemia (APL), a form of cancer that can cause serious blood-clotting and bleeding complications.

“I was shocked to learn that I had cancer,” Kevin recalls. “I wondered why it was me. Then I realized that anybody can get cancer. The stereotype of cancer patients being people who don’t take care of themselves just isn’t true.”

“I started by walking the length of the room several times a day, then I worked myself to a point where I could do laps around the hallways.”

During his hospital stay, Kevin underwent treatment with an intravenous mixture of arsenic trioxide and a form of vitamin A known as all-trans retinoic acid (ATRA).

“The treatment made me very tired,” he says. “My joints were sore and I couldn’t always think clearly.”

During treatment, Kevin forced himself to exercise on a daily basis and get his blood circulating.

“It was hard sometimes, but I needed to get out of bed and get my body moving again, which makes me feel alive. I started by walking the length of the room several times a day, then I worked myself to a point where I could do laps around the hallways.”

After three weeks of treatment, Kevin’s white blood cell count was back to normal and he was feeling much better. He returned home, where he continued with his IV infusion of arsenic trioxide and ATRA for a six-month maintenance period as an outpatient. Six months later, he was given a clean bill of health as no signs of APL could be found.

“Today I feel great,” says Kevin. “Now I’m back at the gym, riding my bike and spending time with my family, which is more important than anything. It’s great to be alive.”

Kevin has gained a new appreciation for the outstanding care available at Juravinski Hospital and Cancer Centre.

“Now I’m back at the gym, riding my bike and spending time with my family, which is more important than anything. It’s great to be alive.”

“The doctors and nurses were all amazing. I couldn’t have asked for better care. I think people should donate to support the work done at Juravinski Hospital and Cancer Centre because you never know if you or someone you know will need its services.”

This holiday season, please give the greatest gift of all – the Gift of Health – to Hamilton Health Sciences Foundation. To see your impact unwrapped and learn how donor gifts are making a difference, or to make a donation, please visit www.giftofhealth.ca or call 905-522-3863.