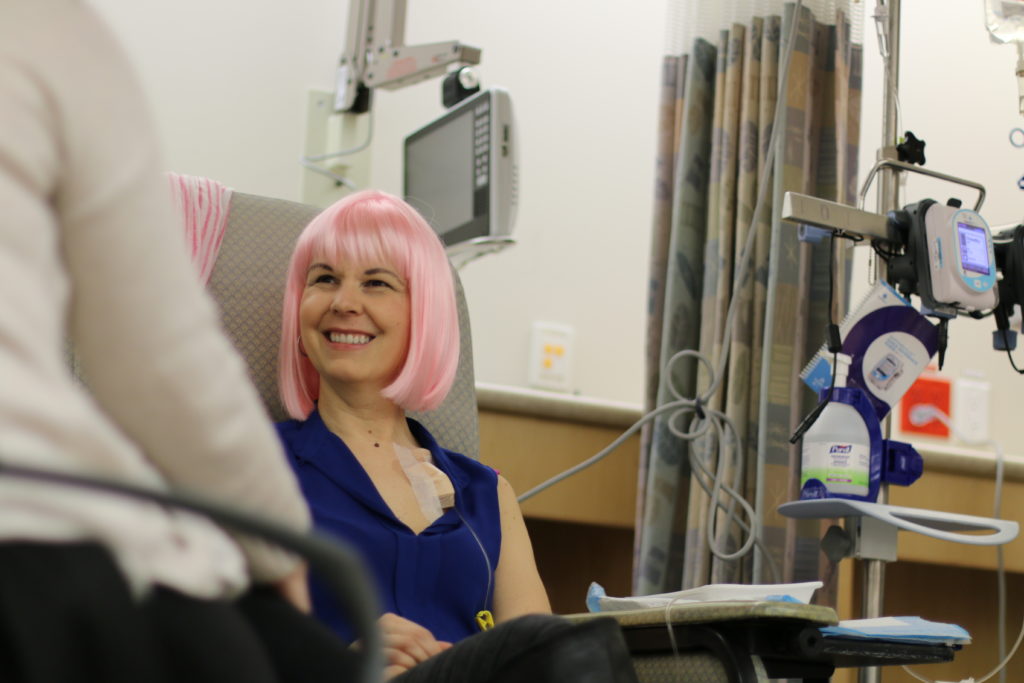 Kim MacDonald is an on-air personality with the Weather Network. She’s a mom, a wife and a proud Hamiltonian. More recently, she also became someone with cancer. MacDonald was diagnosed with breast cancer late in 2016 and has been receiving treatment at Hamilton Health Sciences’ Juravinski Cancer Centre. She has been documenting her cancer journey on a blog called Weathering Cancer.

Because she was already in the public eye, putting this part of her life out there was a natural choice. On Friday, March 24th, she celebrated her final chemotherapy treatment by ringing the symbolic bell in the chemo suite. It’s a rite of passage for patients. She  has agreed to share her experiences here on HHS Share and tell us what documenting her journey online has meant to her.  After the Q&A below, you’ll find a post from MacDonald’s blog called ‘Bad Week, Good Week…Repeat.’ Why did you decide to post publicly about your experience?

I made the decision to “go public” with my cancer diagnosis because I’m a public person. I didn’t want to just disappear from people’s lives without an explanation. It began with an announcement on Facebook and Twitter. The response was overwhelming. I started the blog for myself at first. I wanted an outlet while I was off work and I wanted to tell my story as it was happening to me.I thought it would be cathartic and a good way to document the experience. I didn’t realize what an impact it would have.

What has it been like connecting with people online throughout your journey?

The greatest reward from sharing my story has been connecting with people. Breast cancer can be a lonely experience. Life continues to go on around you as yours comes to a grinding halt. At least the life you knew does. I could not have imagined the outpouring of kindness and generosity I received. On my lowest moments during chemotherapy, I would receive a message from someone boosting my spirits, an unexpected card in the mail or a bouquet of flowers. These things all seemed to happen at the exact moment I needed them and wouldn’t have, had I kept my disease a secret

This is not even the best thing about being so forthcoming with my story. The best messages have come from women who have been newly diagnosed, survivors, and their loved ones. It’s the people who have said that I have helped them in some way find courage in their own battle. I had my head shaved live on Facebook before it started falling out. Thousands of people saw that. I thought it would give others an idea of what it was like to lose your hair to chemo. I had women reach out to me saying that they were now ready to do the same after watching me. I had a mother have her kids watch it so that they would know what to expect. These are the kinds of connections I did not expect. They have given me a sense of purpose that I am happy to have found.

I have also heard from many survivors who have given me amazing advice and who have shared their stories (and positive outcomes) with me. This kind of conversation is invaluable.I will never regret going public with this dreadful, too common disease. I’m just putting a face to it and bringing it out into the light.

Has sharing your experience changed the way you feel about your cancer?

Sharing my experience has definitely changed how I feel about this disease. I have seen such goodness in people and have received so much support that it has overshadowed the dark days tenfold. It’s like having a thousand cheerleaders. It has also opened up so many conversations. In some cases I’m the one enlightening people and in others I am the one being enlightened. I realized very quickly that I was definitely not alone. My family and close friends have been incredible through this as I expected. The massive support I received from outside the walls of my home was not anticipated. Cancer seemed far less scary with an army behind me versus facing it alone. Social media and the internet, in my opinion, have given me the biggest support group I could muster up. I can feel it creeping in slowly, stealthily, trying to take over my brain. It’s that pre-chemo anxiety.  Before my breast cancer diagnosis, I experienced anxiety rarely. Now, it pops in for a visit much more frequently than I care to admit.  It makes me angry. I have one week, every other week, when I feel good, almost normal.  I want to embrace every single good day that I have because I know how awful I will feel once I have my next treatment. And so it goes, one bad week, one good week.

This is why I resent that anxiety. It wants to tap me on the shoulder a day or two before chemo and say “Hey, you’re about to feel like crap. Remember last time?”  I mentally swat it away.  I have no time for this when I’m feeling happy, positive and NOT sick. It’s like I’m being ripped off by worry. Kim at her first chemotherapy treatment at Juravinski Cancer Centre

So here’s what I do. It’s a mental tug-of-war.   Fighting cancer is always part physical strength and part mental.  I may have said that before but it bears repeating.  I tell myself “The chemotherapy is shrinking my tumour and destroying my cancer.” “Every time I sit in that chemo chair, I am one step closer to the end of treatment and the beginning of being cancer-free.” It’s  become a bit of a mantra and most of the time, it works.

This week marks the half-way point of chemo. I have 8 treatments over 16 weeks and this is a milestone that I can celebrate…on my good week.   I’m currently on the AC-T regimen.  AC is the chemo cocktail for the first 4 treatments while T is the last 4. It’s a lot of words I have trouble pronouncing so I’ll leave it to the experts.

“An abbreviation for a chemotherapy combination used to treat breast cancer. It includes the drugs doxorubicin hydrochloride (Adriamycin) and cyclophosphamide, followed by treatment with paclitaxel (Taxol). Also called AC-T and AC-T regimen.” www.cancer.gov

“I still remember those cancer movies from the 80’s (Dying Young anyone?) and was ready for the worst.”

The side-effects are different for AC  vs Taxol  I’m told so I cannot speak on the whole treatment with authority, yet.  I do know that, on the plus side, Taxol does not include nausea as a side effect. On the down side, it does include leg pain and neuropathy.  Taxol also means I’ll be sitting in the “chair” for three hours instead of 45 minutes. Good thing I have very entertaining friends who have promised to sit with me. I like to mix it up so that not one person (including my husband) gets stuck with the same task. Plus, I like to hear what’s going on in everyone’s life and getting chemo is a great way to catch up. How’s that for a positive spin?

In all fairness, as crappy as chemo makes me feel, it’s not as bad as I thought it was going to be. I still remember those cancer movies from the 80’s (Dying Young anyone?) and was ready for the worst. Research has come so far since then. There are a number of medications that help, especially with the nausea. You can’t exactly cruise through it unscathed but it is so much easier than in years past. My health care team wants me to have minimal discomfort and have solutions to almost any side effect that may cause me issues.  I know there are people who would rather me forego chemo altogether for an alternative therapy but I have a lot of faith in my oncologist and believe this is the best way for me to come out of this alive.

In my mind, I have no choice but to follow the time honoured tradition of listening to my doctor who has 35 years experience and my nurse who is a 20 year breast cancer survivor. I will take this one day at a time, be grateful for every moment that I feel well, and I will squash that negative voice in my head until it’s time to roll up my sleeve once again and hope for a good vein.