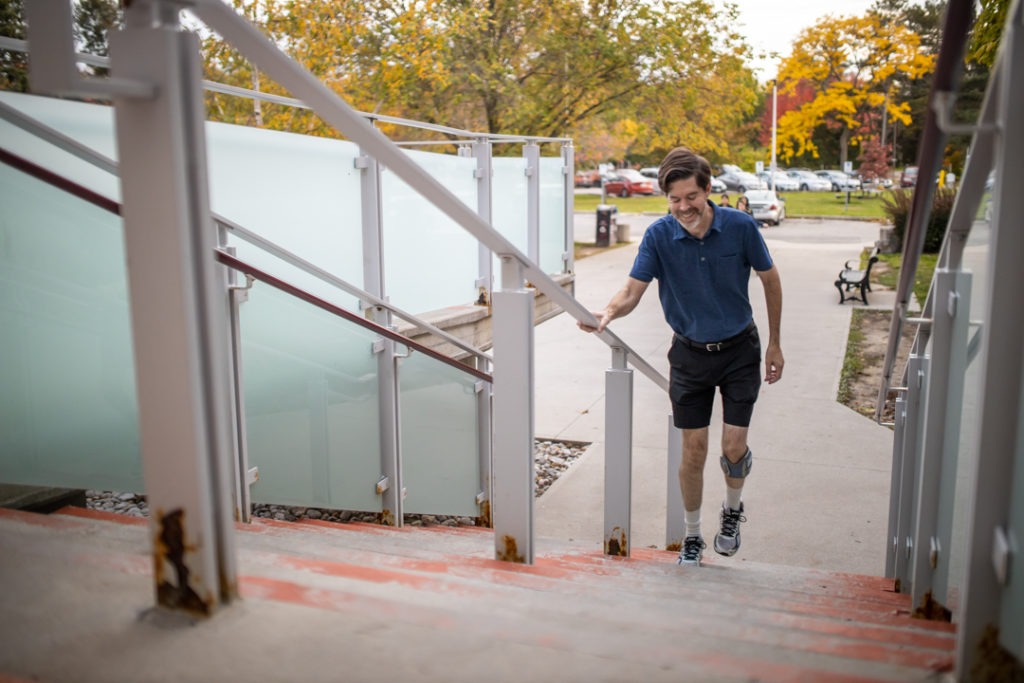 At the time, he enjoyed the daily pleasures of life like most people. He taught kindergarten, jogged and played guitar.

When doctors told him he had MS, a disease that affects the body’s central nervous system including the brain and spinal cord, it was life-altering.

“When I started getting some of the symptoms, it was hard for me to watch regular activities get taken away,” says Bruce.

Symptoms vary greatly, according to the Multiple Sclerosis Society of Canada.

For Bruce, walking became difficult. He had trouble lifting his foot and, though he didn’t experience any pain, he lost almost all function of his leg.

Then he learned of a device that could help his gait without affecting his mobility. 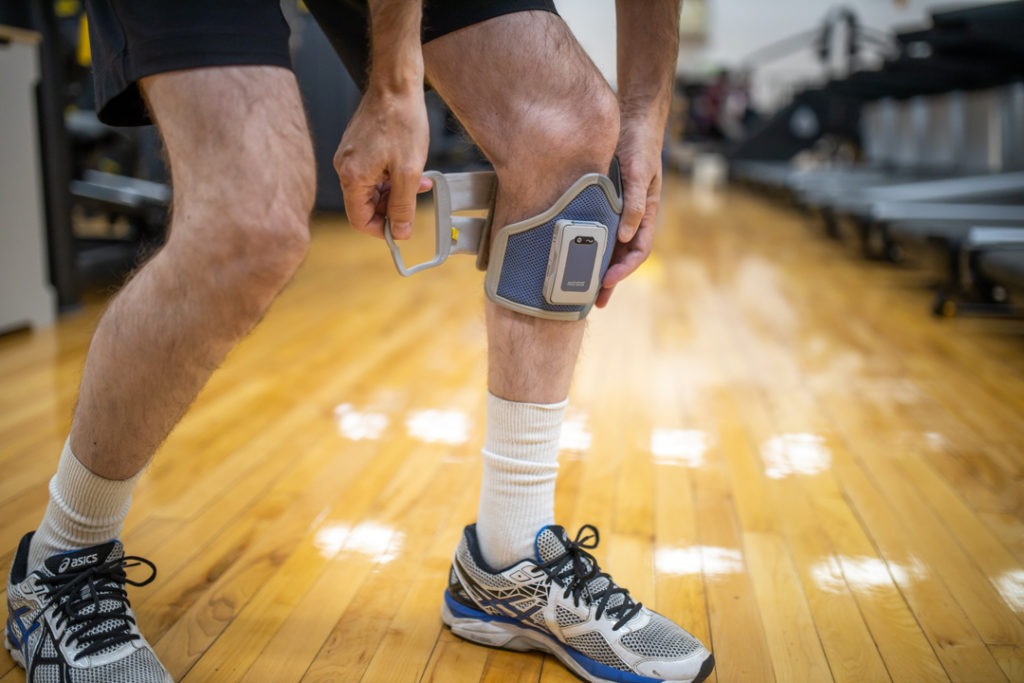 The device, developed by U.S. technology company Bioness, fits just below Bruce’s knee around the top of his lower leg. It requires charging every night before he wears it during the day.

The device looks like a cuff. It gives off an electrical pulse, which then sends a message from the nerve to the muscle to help pick up the toe.

Bruce’s model targets the muscle that lifts his foot so it doesn’t point down during a step. This prevents the front of his foot from dragging.

“This device teaches you how to walk normally again. That was a pretty exciting moment for me.”

“It felt like I could walk again,” Bruce says. “Running wasn’t an option when I was first diagnosed, and now it is. I actually felt like jogging again when I first used it.”

The device isn’t cheap. At around $8,000, it’s likely not the solution for everyone. But Bruce considers it an emotional life saver and it’s been pretty reliable over many years of use.

“I had a hard time going downstairs or getting into my car because I couldn’t lift my foot,” he says. “This device fixes that and teaches you how to walk normally again. That was a pretty exciting moment for me.”

If his device requires any maintenance, Bruce trusts the care team in Hamilton Health Sciences’ (HHS) Prosthetics and Orthotics department.

Sharon Carr, a certified orthotist at HHS who currently cares for Bruce, mostly looks after young patients with neurological issues including cerebral palsy and orthopedic problems like club foot.

Just over a decade ago, her department started working with electrical stimulation devices such as the one from Bioness.

“For the right patients, it works very well and gives them a different option,” says Sharon, who is also a clinical instructor. “It’s not as hot to wear as a traditional device and patients like the feeling of their ankle being free.”

Sharon’s team gives patients who use these devices a comprehensive assessment to determine if they are a good fit. Patients are then able to trial the device under supervision of the Prosthetics & Orthotics department.

“For the right patients, it works very well and gives them a different option.”

The team also provides aftercare to help troubleshoot any problems, and help the patient make the best use of their device.

As Canada’s biggest prosthetics and orthotics program, the team serves a large population, treating patients both young and old.

It’s affiliated with George Brown College and delivers a significant portion of the school’s orthotics curriculum.

Because of its clinical and teaching expertise, the team is an early adopter of many innovative devices, like Bioness. They are able to draw on their years of experience to decide what will work best for patients, and are always exploring new technologies.

Getting his mobility back

Though Bruce still suffers from other symptoms of MS, he says mobility is no longer an issue.

He settled into a routine where he’s active again, thanks in part to his team at HHS. He visits the McMaster Physical Activity Centre of Excellence twice a week and is back to work part-time, sharing his sunny personality with kindergarten students.