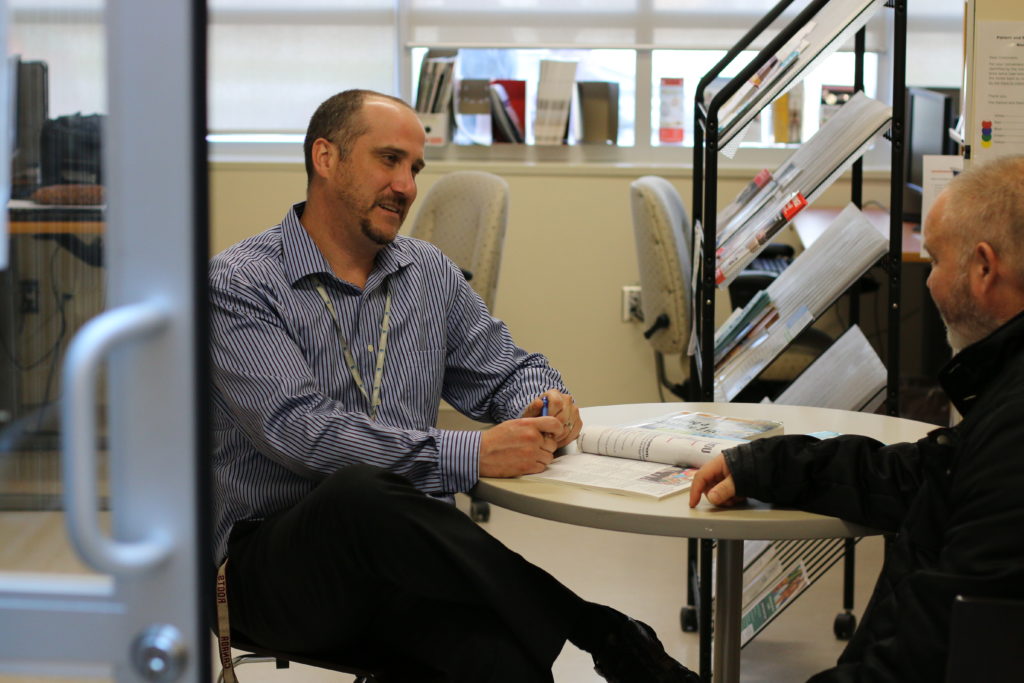 “I’d be on the street if this service wasn’t here.”

James doesn’t mince words when he talks about his experience at the newly expanded Patient and Family Learning Centre at Hamilton Health Sciences’ (HHS) Regional Rehabilitation Centre. When he first visited, a series of events had sent his life into a tailspin and he needed help getting back on course.

His father, one of his greatest supporters, passed away. Not long after, James had a stroke when a blood clot caused by swelling in his legs travelled up to his brain. During his recovery, his stepmom, whom he lived with, died of a stroke herself. On top of this series of tragic events, James lost his licence after his stroke, and needed to pay $800 for a functional driving test before he could get it back.

Stroke doctor, Dr. Kelvin Ng, saw James in the Stroke Prevention Clinic at the Hamilton General Hospital, and identified that he could use additional support. He referred him to Adam Van Sickle, the resource information specialist at the Regional Rehabilitation Patient and Family Learning Centre.

“It was clear that he had exhausted all avenues within his reach to get over the challenge of returning to driving, work and ultimately rebuilding his life again,” says Dr. Ng. “His ‘minor’ stroke disrupted the delicate balance in his life in a way that he found himself rapidly sinking with the challenges faced.”

“It was a snowball effect,” says Van Sickle. “It was like one roadblock after another, and James needed help to get back on track financially and emotionally in addition to recovering physically.”

The Centre serves patients, family and community members to help them access resources and services they need to support their recovery. It operates in partnership with Hamilton Public Library’s (HPL) Disability Information Services Program and Van Sickle splits his time between the two sites. People can visit to gather information about their health conditions, learn about financial assistance programs and get support to navigate what can sometimes be a complex system of social services. Van Sickle also brings his resources to the bedside of patients who are still in the hospital. “It’s about that linkage,” Van Sickle says. “Our health care providers can connect patients who need support with the Patient and Family Learning Centre, and I can connect them with the information and services they need.”

In James’ case, Van Sickle was able to find funding for his driving test thanks to a donation from the Ancaster Lions Club. He also helped James get set up with Ontario Works, which covers the medication he needs for edema that causes severe swelling in his legs.

“The headspace he’s in now compared to where he was when I first met him is much better,” Van Sickle says.

He still needs to access food banks and meal programs because of the financial challenges he’s faced since his stroke, but James now feels empowered to be living independently. He continues to meet with Van Sickle at HPL’s Central Library and hopes to return to his job at Canadian Tire once his edema is under control.

“When people like James have access to the right tools, they’re able to make a more complete recovery physically, mentally and socially,” says Van Sickle.