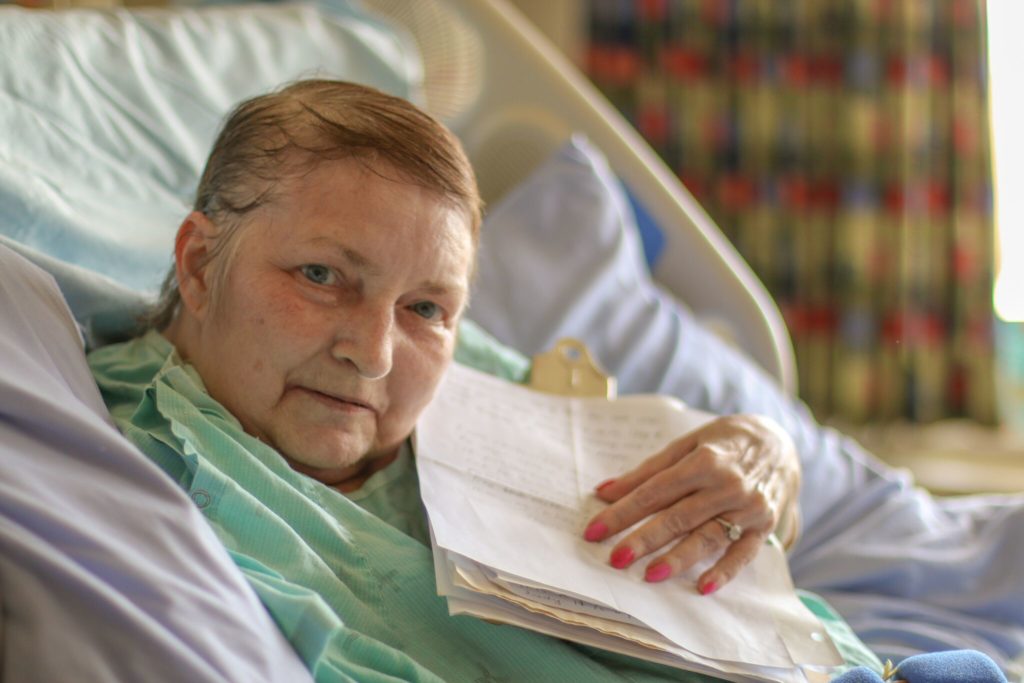 Leaving behind a legacy song

This is what Patty Douglas wanted. For people to read her story, and hear her song. And for them to know that it’s okay to talk about death.

Patty was a healthy 63-year old woman when she went to the hospital for a suspected broken arm. A minor fall had cracked her bone. It wasn’t long before she was admitted and diagnosed with an aggressive form of cancer. The spreading tumour had weakened her bones.

“I fell getting out of bed,” she recalled. “I twisted and my arm broke. It was a complete surprise. Up until that point I was very healthy.”

Patty’s cancer rapidly spread throughout her body and she was admitted to St. Peter’s Hospital for palliative care. During her time there, therapeutic recreationist, Kim Morgan, talked to her about leaving behind a legacy for her family and friends. When she met Jennifer Molinaro, she knew what that legacy would be.

“Writing this song, meeting Jennifer, was a shiny rock.”

“Jennifer is a very talented musician,” says Kim. “She volunteered her time with us, and offered to work with some of our patients to create legacy songs. Patty said yes right away.”

A legacy song is a musical message for both the writer and their loved ones. It’s a way of expressing what is sometimes hard to say in conversation, and leaving behind a piece of yourself. Once Patty put pen to paper, it didn’t take her long to write the poem that would become her legacy song with Jennifer’s help.

Watch a video of Patti and Jennifer singing her legacy song:

She called her cancer a “bag of rocks,” referring to it as this heavy thing she was carrying around. It weighed her down, but it didn’t consume her. She had collected rocks from the ocean since she was a young girl, and knew they can be both sharp and beautiful.

“I carry both things,” she said. “Cancer is jagged and ugly, but there are parts of me that are still shiny and new. I want to get out of this cancer without hurting too many people, including myself.

“Writing this song, meeting Jennifer, was a shiny rock.”

The process of both writing and sharing her song was therapeutic for Patty. It was a way for friends and family to understand what she was going through, and to see light in the darkness of her experience.

After sharing her story and video with us on Friday, Patty died over the weekend. She was at peace, knowing her legacy song would stay behind to inspire others.