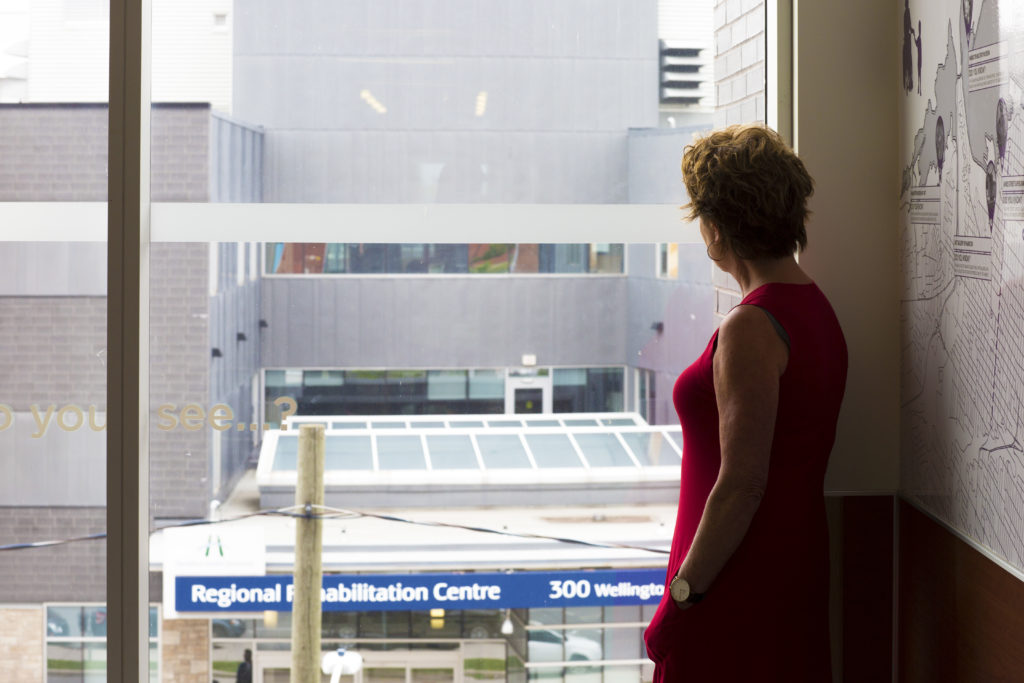 On the other side of the street: Lori’s story Lori Issenman will tell you that she’s grown up at Hamilton Health Sciences (HHS). And it’s kind of true: she’s spent more years of her life working for the hospital than not. Her career has spanned many roles, beginning as a social worker out of school and, in recent years, becoming director for the child and youth mental health program at McMaster Children’s Hospital. The only role she hadn’t filled was that of a patient. One night, in a matter of hours, that changed.

In the middle of the night in late 2015, Lori awoke in the hotel room in Toronto where she was attending a conference. She rose out of bed and fell to the ground. Again, she tried to stand and fell. To avoid further falls, she made her way back to bed.

It wasn’t until she lost feeling in the left side of her body that Lori realized she had had a stroke. She immediately called her husband, who called 9-1-1. Paramedics rushed Lori to St. Michael’s Hospital in Toronto, where clinicians determined that she’d suffered a significant stroke. In a matter of hours, her entire life had changed and, having worked in health care her entire life, she could see the struggle that lie ahead of her.

After her stay in the stroke unit at St. Michael’s, Lori was transferred to HHS’ Regional Rehabilitation Centre at the Hamilton General Hospital campus. As she sat in her room, she saw the irony in her situation. Through the window and across the street sat the brand new Ron Joyce Children’s Health Centre where, just weeks before, Lori stood amongst her colleagues to celebrate the building’s grand opening. Then, she had a very different perspective. She had just begun her new role as director of the child & youth mental health program. Vividly, she remembers gazing out toward the Regional Rehab Centre and feeling a sense of excitement to be part of the growing downtown campus. She was healthy and active.

It was a dizzying and devastating thought, to see how life had so abruptly changed lanes. Yet, even as she sat on the opposite side of the street staring across at her former reality, Lori felt determined.

“There’s a powerlessness that comes with being a patient,” she says. “But I had goals, and I was pursuing them with the support of a team of healthcare professionals who showed true care and kindness.”

Lori spent two weeks receiving intensive therapy at the RRC, followed by four months of outpatient care. Just seven months after her stroke she was back to work, a transition she said was eased immensely by the support and patience of her colleagues.

She’s picked up where she left off. Literally and figuratively, she’s crossed the road and come back again. But the experience of her stroke still sits with her. Physical effects aside, Lori says her experience with illness has changed how she approaches work and life.

“After 30 years working at HHS, I was having the patient experience firsthand,” says Lori. “Now, when someone tells me about their experience with illness, I feel a flash of empathy. I can truly put myself in their shoes.