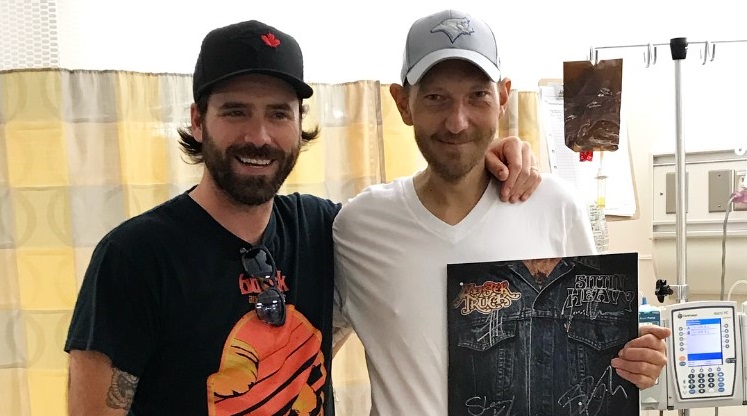 Monster Truck has gotten Darrell Davison through a lot. The Hamilton band’s heavy rock music became somewhat of an anthem when Darrell was diagnosed with leukemia six years ago.

“I have had a lot of bone marrow biopsies and lumbar punctures,” he explains. “They are very painful. Right from the beginning, I would put in my earbuds, and crank up a song by Monster Truck. Rocking out in my head makes me sort of forget what’s happening.”

His song of choice: “The Lion.” The lyrics go,

“It’s the last six years of my life,” Darrell says. “I know the words weren’t written for me, but if feels like they were.”

Since his diagnosis at age 35, Darrell has relapsed three times. He had a stem cell transplant, which kept him cancer free for a while, but the leukemia came back. He has tried a number of new treatments as a participant in clinical trials. Right now, he is receiving a special type of chemotherapy treatment that attaches a marker to his cancer cells. Like an orange “x” on a tree waiting to be felled, it signals to the chemotherapy drug that these are the cells to go after.

He spends about six hours each and every day in the Oncology Day Services (ODS) clinic at Juravinski Hospital and Cancer Centre. A devoted team tries to keep him comfortable while the drugs course through his body. He has earned a reputation as a chatterbox, and the staff enjoy his company. Word about his love of Monster Truck got around.

“My oncologist, Dr. Leber, asked what I was listening to every time, and I told him I listen to “The Lion” by Monster Truck,” says Darrell.

Speechless for the first time

That conversation long forgotten, Darrell was sitting in ODS in late August, when he saw a familiar face walk in. He thought his eyes were deceiving him, but as the man got closer it clicked. Monster Truck drummer, Steven Kiely, had an autographed album in his hand and stopped in front of Darrell.

“You can ask any nurse in C4 or ODS. My name and speechless don’t go together. In that moment, I was absolutely speechless. My jaw was on the floor.” “They’ve been around the world,” says Darrell, reminiscing about the visit. “For somebody to just come in to ODS…he sat there for like an hour, and we just chatted about everything.”

The band gifted Darrell tickets to the Hamilton Tiger-cats Labour Day Classic so he and his son could watch them play the halftime show. The outing was Darrell’s first day off from treatment since June.

“He’s been through so much, and he is always so positive,” says Wendy. “This was just a small thing we could help with, and it was so wonderful to see the band come through for him.”

Darrell, always looking on the bright side, sees it as much more than a small gesture.

“They’re keeping me alive, and making me better every day. They’re already doing so much for me. For them to go above and beyond, it was fantastic.”

He expects to finish his latest round of treatment at the end of September. He’s hoping to be cancer-free for the fourth time. No matter what, he’s going to enjoy every minute he has. As his anthem says— “a new life starts today.”