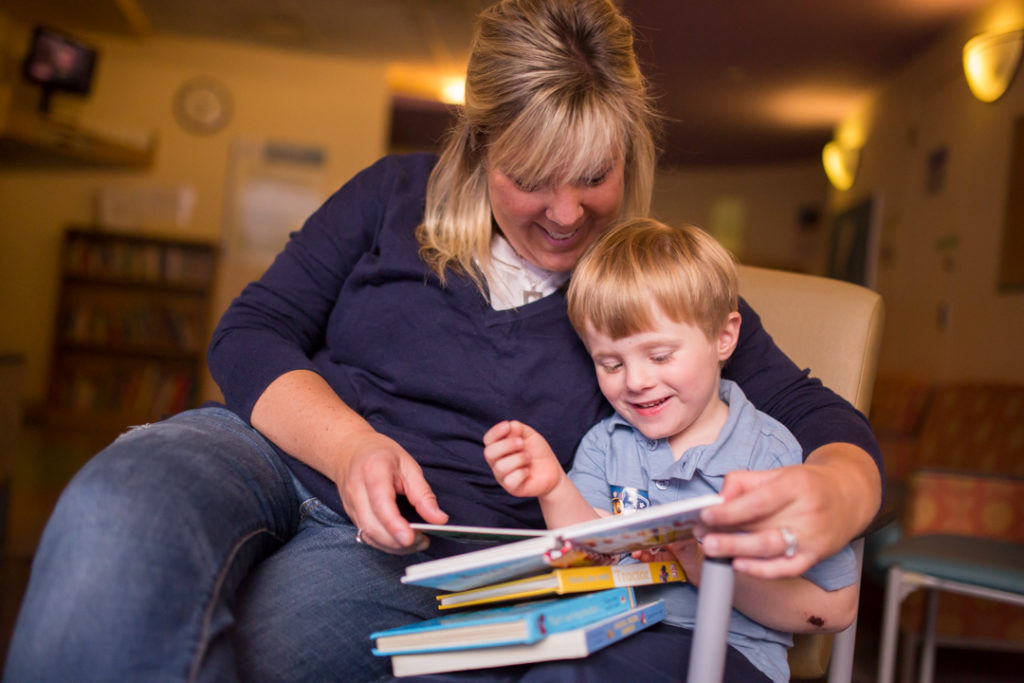 The power of reading to our youngest patients

Karen Beattie spent many days with her son, Freddie, in the neonatal intensive care unit (NICU) at McMaster Children’s Hospital.

There were lots of sad days where she needed to talk to other parents just to have an extra shoulder to lean on.

“Some days were really rocky and others were smoother,” says Beattie, an associate professor in the Division of Rheumatology at McMaster University.

Freddie, now four years old, was born prematurely at 29 weeks and weighed only 1.7 pounds at birth. He spent nearly three months in the NICU.

Having your newborn child in the NICU for any period of time can be a heavy burden. Most parents will take all the support they can get.

New lending library for the NICU

He enjoys one new addition to the hospital though.

The NICU is now home to a small lending library in the parent’s lounge. Families are free to grab a book or two from the library and bring it back into the unit to read to their newborn.

We wanted to make the patient experience better by making it more accessible for parents to read to their newborns.

Beattie is excited to offer this opportunity to young parents, an opportunity that didn’t exist at the hospital when Freddie was born.

Getting involved as a parent advisor She now spends a lot of her time volunteering as a parent advisor for the hospital. One of her first initiatives was to acquire enough books to fill an entire shelf, so parents could experience some normalcy in their child’s first days.

“For many parents, especially those having their first child, buying books is not a priority,” says Beattie. “We wanted to help make the patient experience a bit better by making it more accessible for parents to read to their newborns.”

Beattie worked with Dundas Valley Montessori School to collect appropriate, baby-friendly books from the school’s parents. On Monday, the box to fill the books arrived.

By Tuesday, it was full. The first of three deliveries to the NICU came almost immediately after the idea came to life.

Staff in the NICU are encouraged by the library’s effect on parents.

“We hope the lending library will empower parents to become involved in caring for their newborn,” says Maddie White, the NICU’s education and development clinician.

“As part of our family integration group, a quality improvement program, we discuss things parents can do with their newborn. Reading their child a story helps them feel more like a parent while in the NICU.” Beattie also works with the NICU on its quality improvement work, through the Vermont Oxford Network.

Part of the mandate for every hospital that joins the network is they must have a parent advisor who is either employed by or volunteers with the hospital. Beattie’s goal as the NICU parent advisor is to support as many programs as possible that will benefit the patient and family experience in that unit.

In the future, she hopes to create a peer support program for parents. The family integration group is also developing an app for families to use during their newborn’s stay.

Parents can find the free lending library in the parents lounge near the entrance to the NICU at McMaster Children’s Hospital.