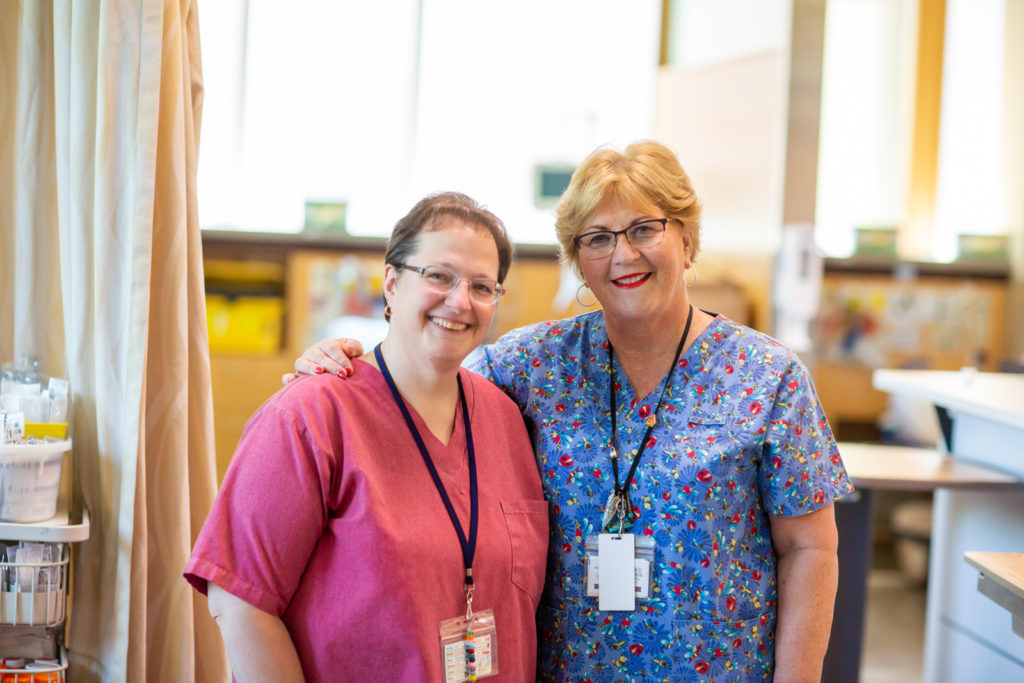 Ask Shelley Vanderwal and Gini Bettger how they know each other, and they’ll tell you they are both nurses in Medical Day Care at Hamilton General Hospital (HGH). Dig a little deeper, and you’ll realize they met under very different circumstances.

When Shelley was ten years old, she was hit by a truck while riding her bike to a piano lesson.

“I don’t remember the accident per se; but I do have bits and pieces of memory,” she says.

She was rushed to HGH with life-threatening injuries. Doctors told her parents she likely wouldn’t survive.

She did, and was transferred to the Burn Unit where she spent more than ten months. Hospital life was very different back then. It was 1978, and visiting hours were limited, even for parents of young children.

She turned 11 during her stay and was one of the youngest patients they had treated. Because she was there for so long, she left quite an impression.

Gini was one of Shelley’s nurses at the time. “I remember her as being very brave and stoic about her injuries, at least in front of me,” she says. “I’m sure she had terrible days dealing with the reality of her situation.”

Gini was married that year and had one of her coworker friends bring Shelley a bouquet from the wedding. That particular memory stuck with both women even though they lost touch when Shelley was discharged from the hospital.

Drawn to a career in nursing

Years later, Shelley began her career as a medical transcriptionist. She was drawn to the medical field because of her time spent in the hospital as a child, but yearned for a vocation that would give her more contact with patients. “I had and still have respect for the nurses who looked after me and felt like I wanted to do the same and help people,” she says. She went back to school for nursing, graduated in 1998 and started work at Hamilton Health Sciences the following year.

A few years ago, she accepted a job in Medical Day Care at HGH. It was there that she reconnected with one of the nurses who inspired her to pursue a career in health care. Gini Bettger. A couple decades had passed, but the two women still shared a bond. Gini had seen Shelley through one of the toughest times in her life.

Gini recently celebrated 40 years of nursing at HGH, and Shelley 20. Working in Medical Day Care they treat many patients with chronic illnesses that require frequent visits to the hospital.

Personal experience shaped her as a nurse

Shelley has some ongoing health issues as a result of her accident. She bears many scars, requires a brace for her foot, and walks with a limp, but she says these challenges have made her a better nurse.

“I can relate to patients and how they are feeling having been on “the other side” enough times in my life,” she says. “The feelings of pain, uncertainty, and other things that patients experience. I can put myself in their shoes and understand what they might be feeling. I think that gives me more patience and empathy to care for them and help them.”

Gini agrees that Shelley’s experience as a child affects the way she cares for patients, but she says the way they met doesn’t change how they work together.
“Now we are just two nurses job sharing in Medical Day Care.”