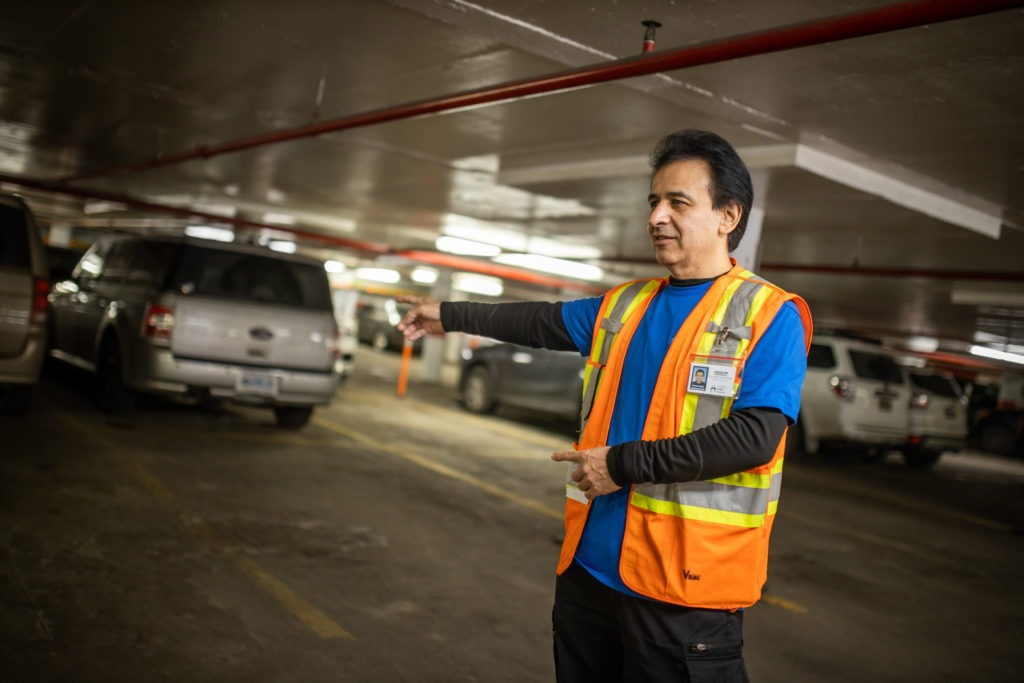 Who are the mystery people in the orange vests in the underground garage at McMaster University Medical Centre (MUMC)?

No, they are not here to upsell you on prime parking spaces at our hospitals. They are, in many ways, the first part of the patient and family experience. And they’re here to help.

Joaquin Esperanza has been with Hamilton Health Sciences (HHS) for one year. His goal at work is to bring smiles to visitors’ faces.

“We know coming to the hospital is probably not the best part of their day,” Joaquin says. “What we want to do is make the experience easier by helping them get through a stressful situation like parking their car in a strange, new place.”

A dream to come to Canada

Joaquin had to get used to a new way of life when he fled the Salvadoran Civil War in the early 1980s. He was only 15 at the time.

After landing in Los Angeles, he met his wife and had a baby girl. But they knew they couldn’t live there long-term. Though U.S. immigration laws allowed people into the country who escaped the war in El Salvador, Joaquin didn’t qualify because he crossed the border after a certain date. Only his daughter, Nora, who was born there, was a legal citizen.

Living with the fear of being sent back to a war-torn country with a young family, they made their way to Canada via Buffalo to claim refugee status. His love for baseball after following the Los Angeles Dodgers was the reason he wanted to live here.

“I learned Canada had two teams, one in Toronto and one in Montreal. I couldn’t speak French so I chose Toronto,” he says.

Once he got to Buffalo, though, he needed to persuade three judges to let him and his family stay in Canada because they were afraid to return to El Salvador. He still has the paper the government gave him that prevented the chance of being deported while he waited for his hearing in the U.S.

Building a life in Hamilton

After the hearing, the judges allowed Joaquin and his family to stay in Canada and eventually become citizens.

His dream came true. He now has three daughters, two of whom are nurses in nearby London and another who works at Humber College. They are also regulars at their church, which helped them get settled in the community when they first arrived.

“Working at HHS has given me more time to spend with family,” he says.

On top of that, he can make a person’s day by helping them park their car during a stressful time.

Parking lot attendants at MUMC take care of a garage that can fit over 1,000 cars a day. Visitors come down the ramp and can park themselves, but on a busy day, spaces may be limited. During those times, drivers can hand an attendant their keys, who take care of the rest while they rush to make an appointment or visit a loved one.

“I once had someone call me an angel and another who said ‘God bless you guys’,” he recalls proudly. “When people tell us we’re doing a good job, it makes me feel great.”

Many car owners are quite protective of their cars, particularly large trucks. Joaquin and his colleagues do a great job moving cars to where they need to go.

Hamilton Health Sciences | @HamHealthSci - June 29
Would you know when someone is having a stroke? By knowing the FAST signs you could save a life. #BeatStroke… twitter.com/i/web/status/1…
Ways to Give