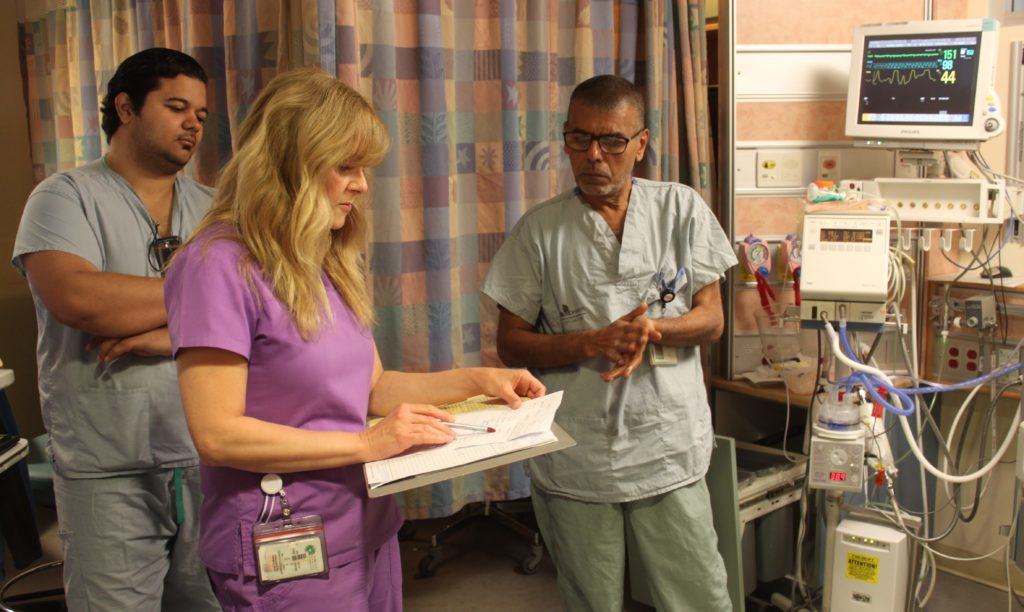 The NICU at MCH is a temporary home to our region’s sickest babies. Because the babies in the NICU are so fragile, small changes in their statuses can quickly escalate to life-threatening events. It generally takes one to two days for a child or adult to become dangerously ill after early warning signs present. In NICU infants, that timeframe is closer to one to three hours. This means that health care providers have only a small window in which to intervene. If for any reason early signs of deterioration are missed, babies are at high risk of dying or suffering life altering complications.

This is why staff and physicians in the NICU at MCH decided to create a comprehensive protocol that eliminates as many unknowns as possible from the equation.

Mapping out a plan

The PARTENeO Project (Patient At Risk Trigger Event huddle to improve Neonatal Outcomes) creates a contingency map from the early warning signs that may be indicators of impending deterioration to the care paths that will best prevent deterioration.

“By actively recognizing these signs and responding rapidly with a predetermined plan, we can prevent or mitigate severe consequences.”

Dr. Sandesh Shivananda, a neonatologist in the NICU at MCH, says the project is unique because any of the early warning signs trigger a structured beside team huddle. “Coordinated action can prevent a severe deterioration in tiny babies,” says Dr. Shivananda. “By actively recognizing these signs and responding rapidly with a predetermined plan, we can prevent or mitigate severe consequences.”

The NICU team began the project in September 2015 by measuring how frequently babies were deteriorating. They found that 20-25 deteriorations were happening each week and about 75-80% of them were preceded by early warning signs. With this information in hand, they created a list of ten early warning signs that would trigger the PARTENeO project protocol.

Once these early warning signs were clearly identified, they determined seven critical events that could be prevented. From there they created a protocol called a PARTENeO Huddle that would be implemented in the event of an early warning sign.

Bringing everyone to the table

This unique Huddle involves all members of the health care team including the baby’s parents if they are present. It helps them create a comprehensive contingency plan. Because everyone is involved from the get-go, everyone understands the plan and has an opportunity to ask questions and add input. There is less risk for error when information is shared directly rather than from person to person.

“Everybody has a say and is on the same page including parents, which is awesome” says registered nurse Jen Aglor. “Every time a message is relayed to a new person, something tends to change or get missed. This way things are less likely to fall through the cracks.” The Huddle operates around the acronym IGLAAC (Illness severity Goal Likelihood of deterioration Anticipated problems Action items Contingency planning) and ensures all components of care are accounted for. It creates strict timelines for notifying an attending physician or intervening if a baby’s status changes in any way. By planning for the next steps, any further worsening can be thwarted faster because the whole care team is already aware of the plan. Even if the deterioration is unavoidable, the severity is decreased due to the rapid response the Huddle creates.

“We’re trying to see the future and anticipate problems before they happen,” says Emily Rempel a respiratory therapist in the NICU.

A planned extubation is one of the early warning signs identified by PARTENeO. When a baby’s breathing tube is going to be removed, his or her care team gathers for a PARTENeO Huddle to plan out what they will do in the event of different outcomes during the extubation. Rempel says this process involves identifying potential risks that are specific to the baby such as a sensitive gut that wouldn’t respond well to the pressure of resuscitation. With this in mind, they plan alternative responses in case anything goes wrong.

Over the course of the PARTENeO project, Dr. Shivananda and his team have been studying whether the unique protocol they’ve created is helping to reduce the number of life threatening critical events that occur in the NICU.

Early results have shown that the PARTENeO Huddle has significantly reduced deterioration after the removal of a breathing tube. Since this is a common procedure in the NICU, it’s an important win.

They hope to share their practices and materials with other NICUs around the world so more infants can benefit from PARTENeO.