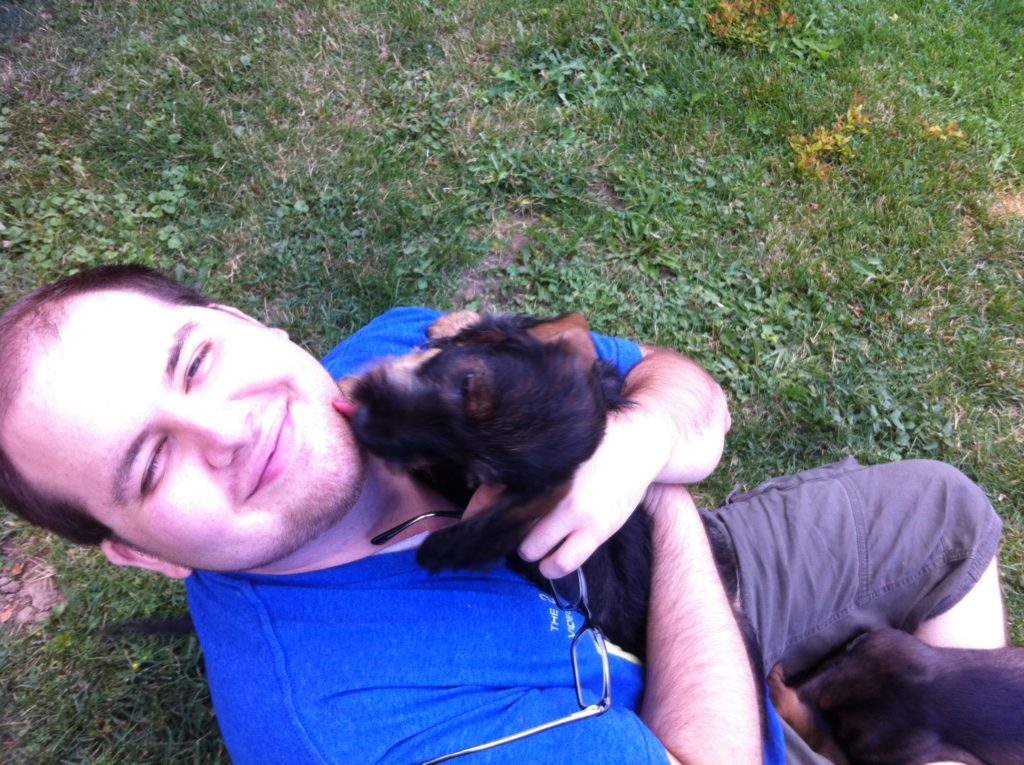 Patients and Pets are a Healing Combination

Zachary Noble was just 23 years old when he was diagnosed with an aggressive form of Hodgkin’s Lymphoma. He received care at the Juravinski Cancer Centre and was also a patient at the Juravinski Hospital where he underwent a stem cell transplant in August 2014.

Coming from a dog breeding and showing family, Zachary had a love of dogs. While in hospital, he found it difficult to be away from his dogs because to him, they were family. In fact, an undercover visit from his family dog, Effi, made a world of difference to Zachary as it helped to lift his spirts when he needed it most.

Zachary wanted all patients to be able to experience the same joy. He came up with Zachary’s Paws For Healing (ZPFH) and made his family and care team promise to find a way for all patients, especially those with long term stays in hospital, to have visits from their beloved pets.

Zachary passed away November 28, 2014, but his dream is now a reality.

In September, ZPFH began facilitating companion pet visits at the Juravinski Hospital. Donna Jenkins, Zachary’s aunt and founder of ZPFH worked with determined JHCC committee members, including Jennifer Wiernikowski, Maggi Jamieson, Dr. Ann Benger, Wendy Bursey, Theresa Harper, Louise Brady and Michelle Roy worked to develop procedures for the visits that not only adhered to existing hospital policies and infection control protocols, but also introduced practices that exceed them to ensure every visit is safe. The new program was initially piloted on C4 – Hematology, C3- Oncology and in the Intensive Care Unit (ICU) and Cardiac Care Unit (CCU) but has now expanded across the hospital. The program and partnership with Zachary’s Paws for Healing is a first of its kind in Canada. “Zachary’s Paws For Healing would still be a dream if it had not been for the Juravinski staff that knew and cared about Zachary,” says Donna Jenkins, founder of ZPFH. “They have proved time and again that the Juravinski Hospital is not just a health care facility, but a human care facility. Every department at Juravinski Hospital is committed to enhancing the patient experience. I’m so proud to have partnered with the hospital on this pioneering initiative. Zachary believed in love and being good to others and would be thrilled to know that through ZPFH, love was being spread to patients and pets.”

To date, there have been 28 companion pet visits with some of them occurring for end-of-life patients such as Shirley Biggs. While in ICU, her family surprised her with a visit from her beloved cabochon, McCoy, who greeted Shirley with a lick to her hand before contentedly lying beside her. Shirley was overjoyed by McCoy’s visit and it was all that she could talk about in the days after before she passed away. Shirley’s son-in-law, David Lang, was so moved by the impact of the pet companion program that he’s now one of 18 ZPFH volunteers.

“I am thankful to ZPFH and the Juravinski Hospital for making it possible for patients to have visits with their pets because I’ve seen first-hand its healing effects,” says David. “I felt compelled to volunteer with ZPFH because I want to be able to give back and help other families experience the same wonderful benefits of a companion pet visit as my family did.”

The formal adoption of the companion pet visitation program is also personally significant to Jennifer Wiernikowski, an advance practice nurse on C4 Hematology who was also Zachary’s nurse.

“Before Zachary passed away, he looked me straight in the eye and made me promise that I would help Donna make pet visits possible at the hospital,” says Jennifer. “I’m so proud to have been able to support this initiative, to ensure that Zachary’s legacy will impact Hamilton Health Sciences in such a positive way into the future.”