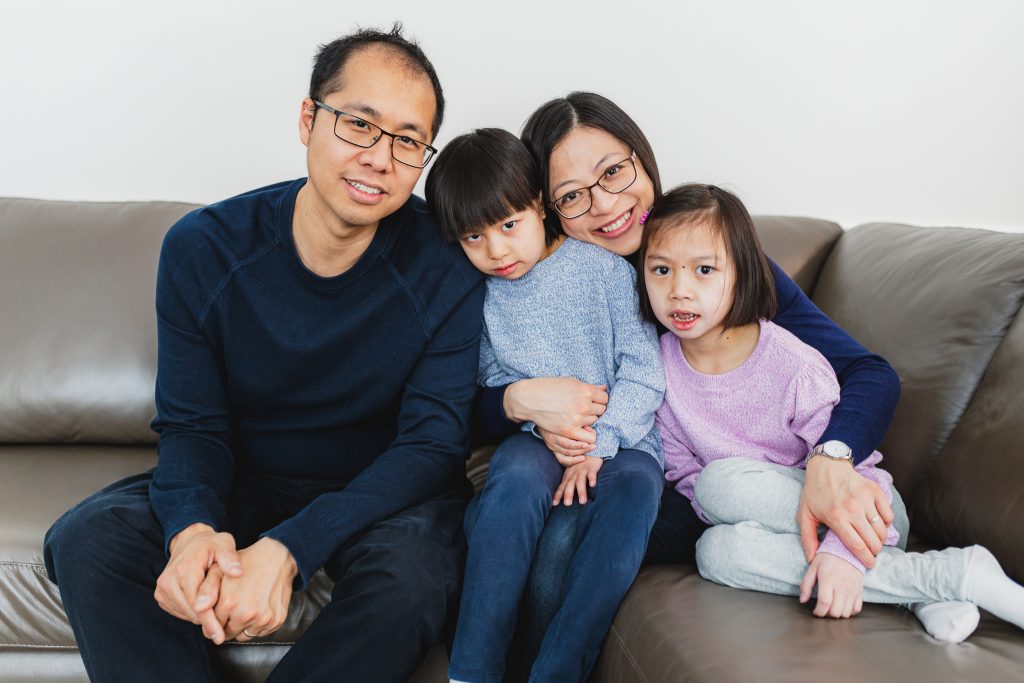 The Wong family’s quality of life has dramatically improved since the HHS PReSS team was able to procure special access medication to manage the children’s seizures. From left to right: Parents Jason and Hilde Wong with Janelle, 6, and Evelyn. 7.
Stories

Relentless, debilitating seizures plagued Waterloo sisters Evelyn and Janelle Wong for most of their young lives.

The Hamilton Health Sciences (HHS) patients were diagnosed with Dravet Syndrome as infants. This rare, severe and drug-resistant form of epilepsy is characterized by frequent and often prolonged seizures.

Janelle, 6, experienced up to 200 mini-seizures a day, lasting about one second each. Longer seizures of one minute or more happened about five times a week. The longest one she ever experienced lasted almost two hours.

Evelyn, 7, no longer has as many mini seizures, but experienced convulsions of one minute or more about twice a week. Between the two girls, there have been hundreds of trips to the hospital emergency department over the years, including admissions and ICU care. 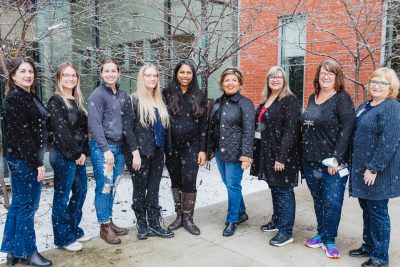 The girls are patients of Dr. David Callen, a pediatric neurologist at HHS McMaster Children’s Hospital. Finding medication to manage seizures was an uphill battle due to the drug-resistant nature of Dravet’s.

“The girls tried about 10 different seizure medications over their lives and nothing was helping,” says Hilde. But thanks to the combined efforts of the girls’ parents, Callen and the HHS Pharmacy Research Support Services (PReSS) team, the girls started taking a new medication last fall. It has dramatically reduced the frequency and severity of their seizures.

“Accessing this medication has been life-changing for our family.”

The PReSS team helps HHS patients gain access to medications unavailable in Canada through its Special Access Program. Fenfluramine, the medication the girls have been on for just over six months, isn’t marketed in Canada.

“The impact of this new medication has been profound,” says Hilde, who is sharing her daughters’ story for Pharmacy Appreciation Month in March. “Their improvement has been remarkable. In just two days we could see that this drug was working.”

Janelle went from as many as 200 mini-seizures a day to just 15, and one larger seizure a week instead of five. Evelyn, who often experienced seizures of one minute or more, has about three a month instead of eight. The girls haven’t visited the hospital emergency department since starting fenfluramine because their seizures can be managed at home.

“The PReSS team members are really the wizards behind the curtain.”

The team supports over 150 clinical trials across HHS and also helps patients like the Wong sisters gain access to medications not on the Canadian market.

Before being authorized for sale in Canada, drugs must successfully go through Health Canada’s review process to assess safety, effectiveness and quality. The Special Access Program, a branch of Health Canada, allows physicians to prescribe drugs not currently available here if conventional therapies have failed or are inappropriate. The drug’s manufacturer must also agree to release the product.

Hilde learned about fenfluramine through a Facebook support group for families impacted by Dravet Syndrome. She asked Callen if it might help her girls, and he reached out to Karen Charles to investigate further. She is the PReSS team’s pharmacy research coordinator and Special Access Program coordinator. 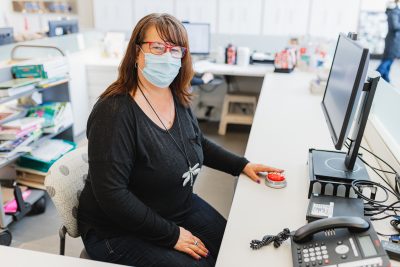 Special Access Program coordinator Karen Charles has a big red `easy’ button on her desk. But make no mistake. There’s nothing easy about the PReSS team’s work.

Charles has a big, red `easy’ button – the kind sold at Staples — on her desk at MUMC, but make no mistake. There’s nothing easy about the complex web of multi-level, international connections that the PReSS team navigates every day to track down and procure such medications.

“The work involved in bringing these medications to our patients is extremely complicated,” says Gita Sobhi, PReSS manager and institutional coordinator of the Special Access Program. “Karen is a great detective with many years of experience in this line of work.”

“We are forever grateful.”

When physicians identify a drug that might help their patient, it’s the PReSS team’s job to track it down, get all of the necessary approvals and arrange payment. Time is often of the essence, since these patients are often very sick. “They’ve tried every available drug on the Canadian market and nothing is working,” says Callen.

When procuring fenfluramine for the Wong sisters, Charles learned that the Irish company marketing this drug had given some patients in British Columbia special access, so she applied through Health Canada to also make it available for the girls. 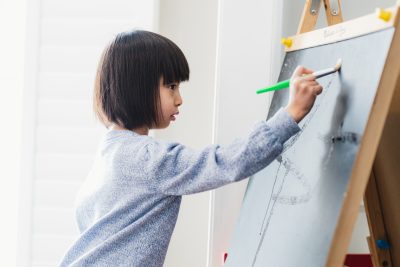 With far fewer seizures to contend with, Janelle can now enjoy arts and crafts more often.

The complicated process required her to get pre-approval from the drug company before she could send the request to Health Canada. Pre-payment was also required, and since the drug wasn’t covered by insurance the Wongs would be responsible for paying a whopping $7,000 per month to treat both children. PReSS and Callen helped the family successfully apply for the cost to be covered on compassionate grounds.

“The PReSS team members are really the wizards behind the curtain,” says Callen. “They work with physicians, international drug companies and various levels of government at home and abroad to get these medications to our patients as quickly as possible.”

Another important team member is pediatric neurology nurse practitioner Christina Carter, who works with Callen, his patients and their families. This includes being the link between Callen, the patient and family, and PReSS team. Her role further highlights the high level of collaboration involved in procuring special access medications. 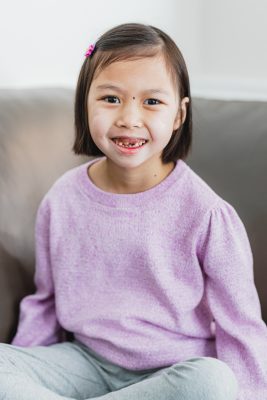 “I can’t say enough about the vital work that this team effort plays in supporting our patients,” says Callen.

The work is both exhausting and rewarding.

“I think a lot of people would be surprised to know what hospital pharmacy teams do behind-the-scenes,” says Charles. “In PReSS’ case, we literally scour the globe and cut through miles of red tape to procure special access medications for some of our sickest patients who have run out of options.”

With their lives no longer ruled by convulsions, Evelyn and Janelle’s cognitive skills are improving. “It’s really helping them developmentally,” says Hilde. “Their speech is getting better because they’re able to express themselves more with words. Accessing this medication has been life-changing for our family. We are forever grateful.” 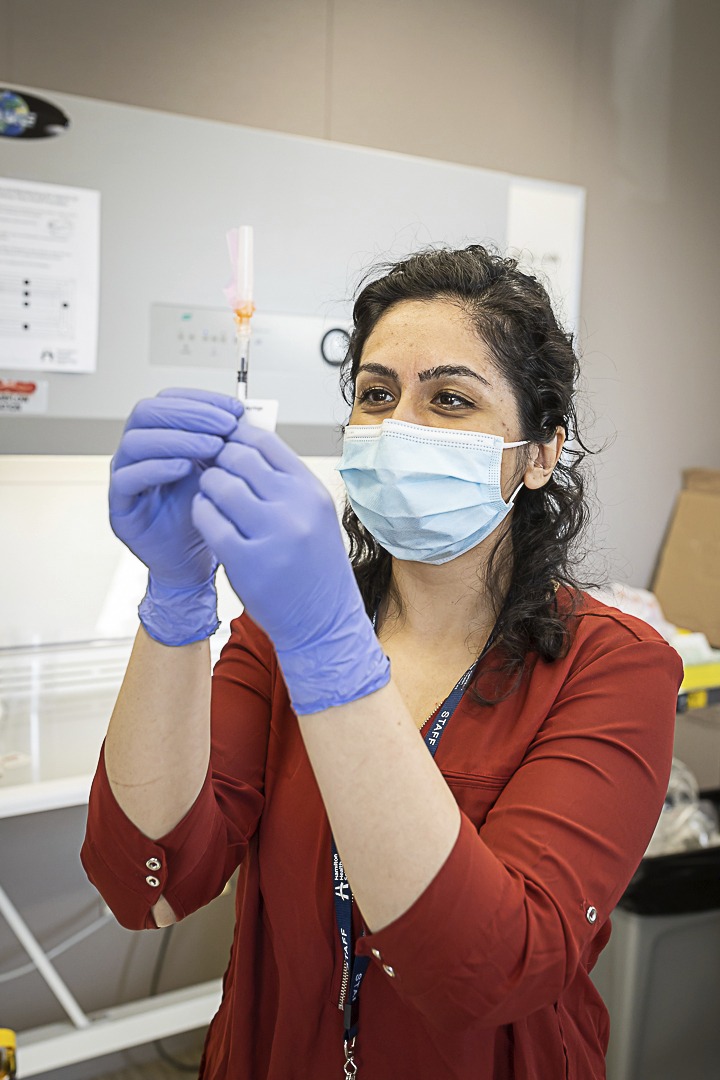 From freezer to arm: HHS pharmacy team part of history in the making 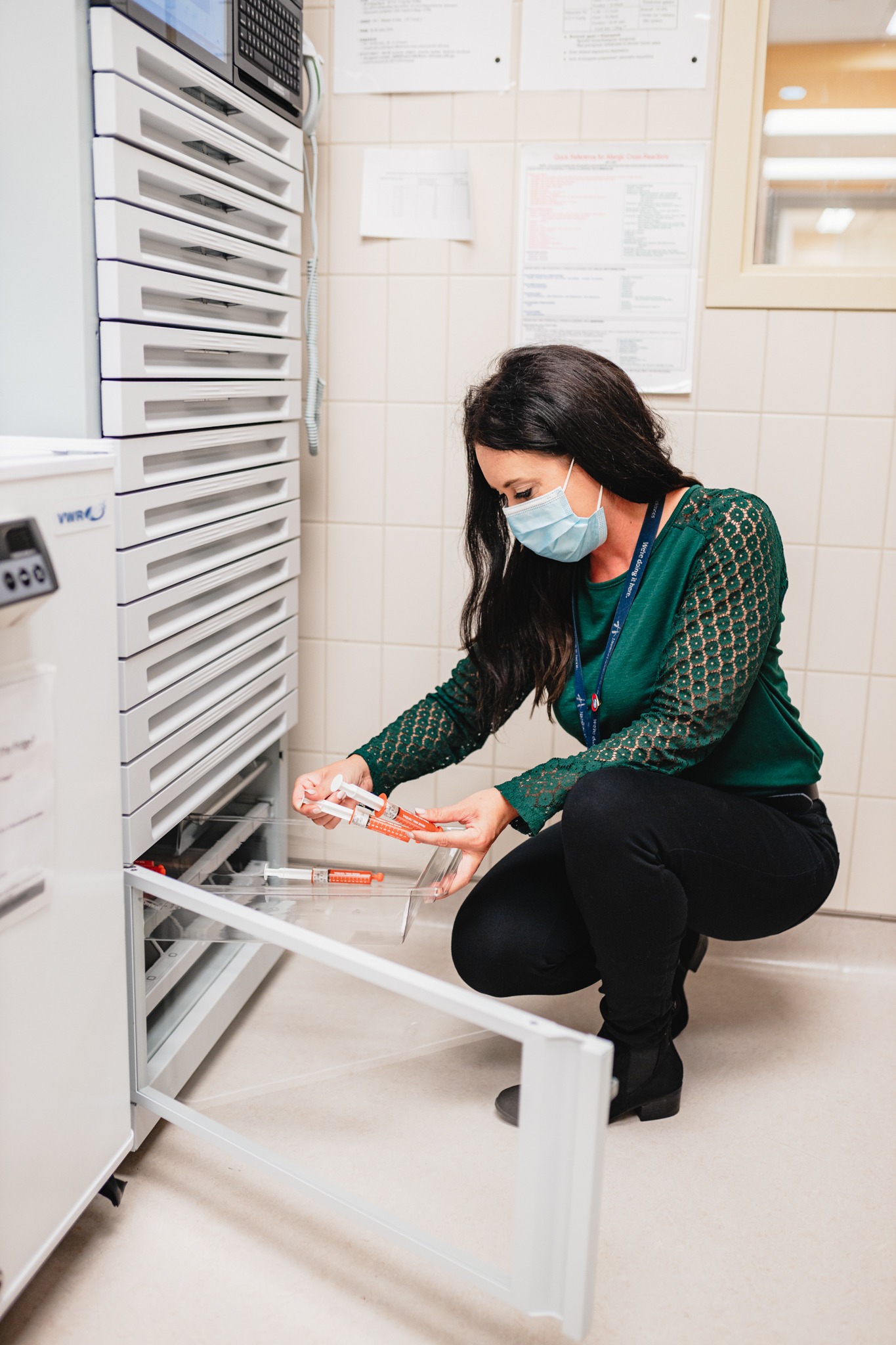