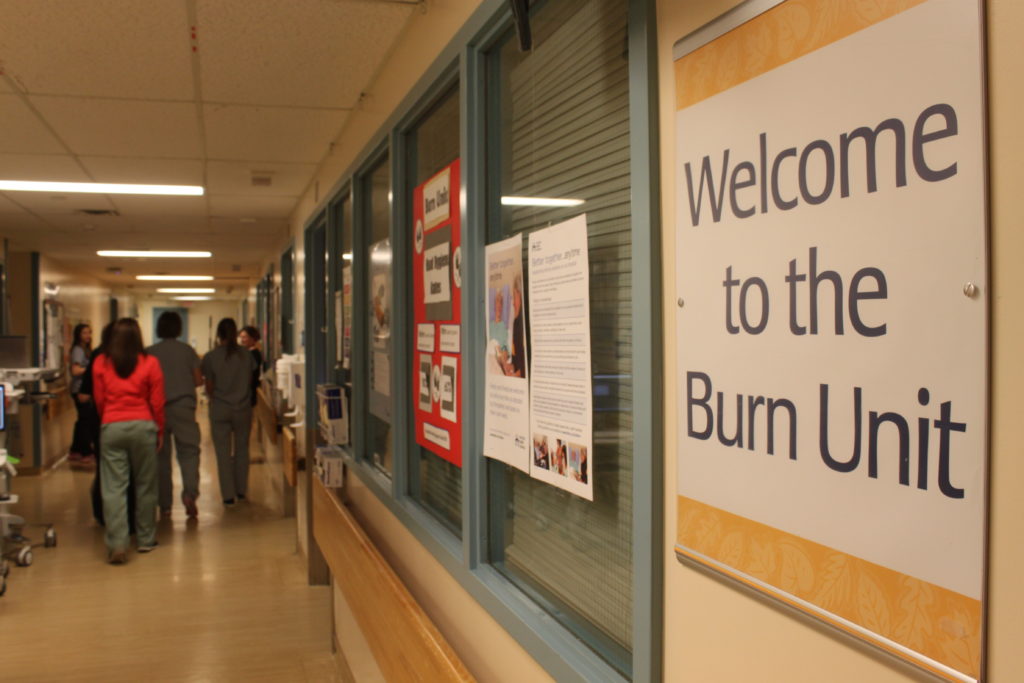 It’s a call no one wants to receive. When Tanya was told that her husband Phil had been injured in a serious building fire, she rushed to meet him at the Emergency Department of the local hospital in St. Catharines. Phil had suffered third- and fourth-degree burns to 50 per cent of his body.

“Then I fell into a coma for about a month.”

After being stabilized, he was flown to Hamilton General Hospital (HGH) for specialized care in the Burn Trauma Unit (BTU). Phil underwent a number of skin grafts, with skin from his back and stomach grafted onto his hands, arms and legs. Pressure garments were used to help control scarring and promote healing.

“Then I fell into a coma for about a month,” he says. “When I came out of it, I received quite a bit of respiratory assistance and sedation for pain.”

Phil received care from the many specialists in the BTU’s multidisciplinary team, including therapists who helped him regain movement in his body. “We began working immediately with Phil through passive range-of-motion exercises,” says Nick Morrison, an occupational therapist in the BTU. “For several hours every day, we worked toward the goal of regaining his previous level of movement and independence.”

“He was always set on getting through the hard work in order to get home and back to his daily life.”

Morrison was impressed with Phil’s resilience during such a difficult time. “Rehabilitation from an extensive burn injury is a very painful process, but Phil never complained about his pain or his situation,” he recalls. “He was always set on getting through the hard work in order to get home and back to his daily life.”

A year after the fire, Phil continues his recovery at home and frequently visits the BTU for appointments with various specialists.

Phil is eager to return to a more active and independent lifestyle, but the limited use of his arms is proving to be a challenging barrier. He has heterotopic ossification in both elbows, which is an abnormal bone growth triggered as part of the body’s response to physical trauma. Due to the extra bone growth, Phil can’t bend his left elbow at all and his right elbow has only partial range of motion. He’s scheduled to have surgery to remove the extra bone, which should result in greater functionality of both arms, and less discomfort.

Every day sees Phil making progress in his recovery, and he realizes that “things could have been much worse” had it not been for the care he received at HGH.

“Everybody at the Burn Unit was phenomenal, going above and beyond. They saved my life, and I see how important it is for them to have donor support so patients like me can receive such amazing care.”

To help fund programs that care for people like Phil, please consider a donation to Hamilton General Hospital Foundation.