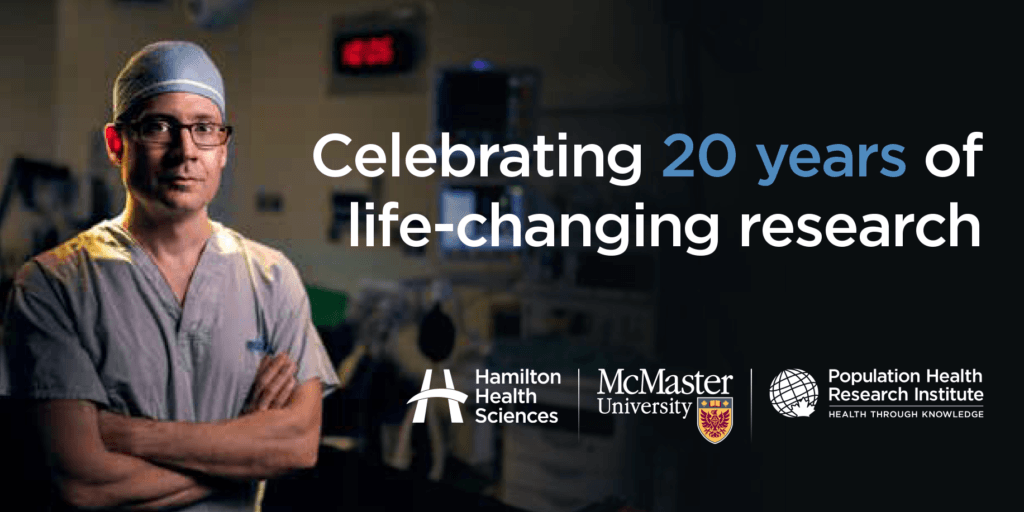 Over the past two decades, this globally-renowned institute has become a research powerhouse with more than one million people enrolled in its studies worldwide. The joint HHS and McMaster University institute began with a focus on cardiovascular disease and diabetes and broadened to include population genomics, perioperative medicine, stroke, thrombosis, cardiovascular surgery, renal, obesity, childhood obesity, bone and trauma and implementation science.

The PHRI team is comprised of scientists and research support teams brought together in a collaborative environment where they can benefit from each other’s expertise. Together, they focus on improving major health outcomes affecting Canadians and people around the world, also working with vulnerable populations in Canada such as the Indigenous community, inner-city populations, immigrants and refugees to improve health equity.

“PHRI’s expertise and commitment to research excellence has made a difference in people’s lives not just at Hamilton Health Sciences, but across our community and around the world,” said Rob MacIsaac, president of HHS. “We are proud that they call Hamilton home, not only for their important research but for being a magnet to attracting world-class researchers and clinicians who care for our community.”

PHRI has been ranked among the top three research institutes in Canada and twice ranked first in the past six years. Their success contributes to HHS’ consistently high research ranking including being named Canada’s third most research-intensive hospital for the past two years.

“This work and global impact is only possible because of the long-standing culture and supportive environment in Hamilton for research, the team spirit and imaginative efforts of the scientists and staff at PHRI, but equally importantly the collaboration and friendship of key scientists around the world in about 100 countries,” said Dr. Salim Yusuf, executive director, Population Health Research Institute, HHS chief scientist, and distinguished professor of medicine at McMaster University.