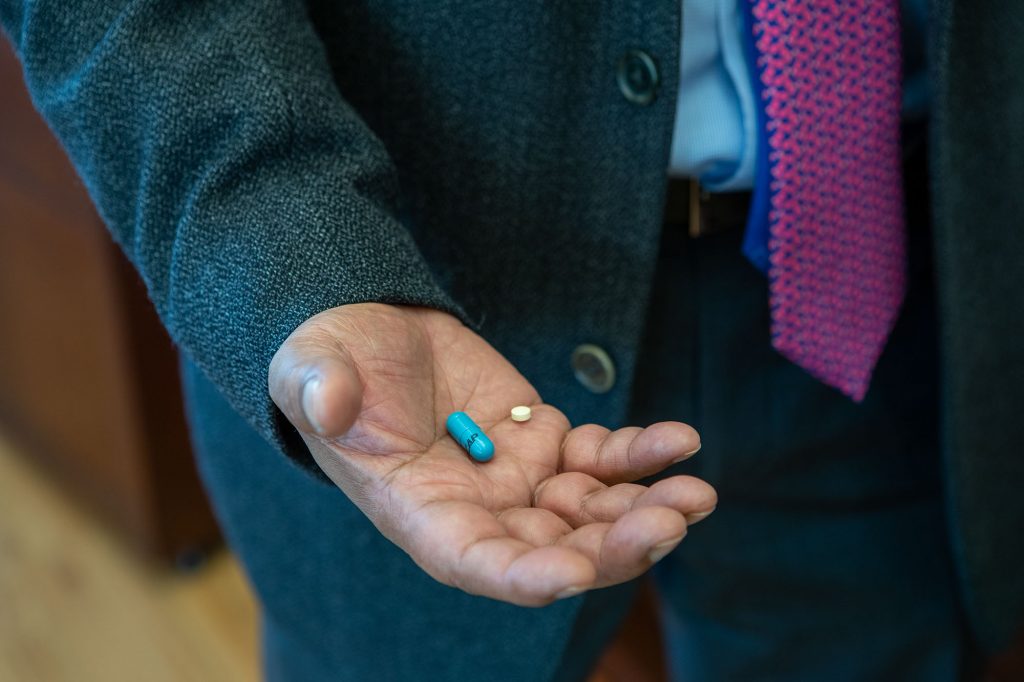 HAMILTON, ON (Nov. 13, 2020) – Heart attacks, strokes and other cardiovascular incidents can be cut by 20 to 40 per cent through use of a polypill which combines three blood pressure and a lipid lowering medications taken alone or with aspirin.

An international study of people with no previous heart disease or stroke, but at intermediate risk, found the polypill alone may reduce the risk of heart attack, stroke, revascularization procedures (such as angioplasty or heart surgery) or other cardiovascular incidents by about 20 per cent, and the combination of the polypill and aspirin may reduce those cardiovascular events by up to 40 per cent.

Could prevent millions of incidents of stroke and heart disease

The study was conducted in 89 centres from nine countries and coordinated globally by the Population Health Research Institute (PHRI), a joint institute of McMaster University and Hamilton Health Sciences.

“This is the start of a transformational approach to preventing heart disease. We could save millions of people from experiencing serious heart disease or stroke each year with effective use of the polypill and aspirin,” said Salim Yusuf, co-principal investigator for the study and professor of medicine at McMaster University.

“In addition to stopping smoking, the most modifiable risk factors for cardiovascular disease are high blood pressure and elevated cholesterol, so we wanted to test a polypill along with aspirin, which has proven value in people with established vascular disease,” said Yusuf, who is executive director of PHRI and a cardiologist at Hamilton Health Sciences.

As the most common serious illness globally, cardiovascular diseases account for about 18 million deaths each year, with more than 80 per cent of those in low-income and middle-income countries. More than 40 million people around the world are impacted by cardiovascular events each year if those who recover from a heart attack or stroke are included.

“A polypill is not only effective, it is likely to be cost effective since it is based on using commonly used generic drugs,” said Prem Pais, co-principal investigator of the study and professor of St. John’s Medical College and Research Institute in Bangalore, India. “A polypill is convenient for patients to use as it combines several effective drugs in a single pill and is taken once a day, which would be expected to improve adherence.”

Today the study was published in The New England Journal of Medicine and the co-principal investigators are scheduled to present the study’s results at the 2020 American Heart Association scientific sessions.

“The results of the study have implications for reducing the burden of cardiovascular diseases globally. Even if only one third of eligible people receive a polypill, its use will likely avoid millions of individuals experiencing serious cardiovascular diseases worldwide,” said Pais. “It also opens the way for a community-based approach with health workers working under a physician’s supervision, enabling the pill to reach a large number of people.”

“The use of the polypill widely will benefit people in both the rich and poor countries as there are major gaps in treatments in populations all over the world,” said Philip Joseph, second author of the study, associate professor of medicine at McMaster, investigator at PHRI and cardiologist with Hamilton Health Sciences.

The information came from the International Polycap Study 3 (TIPS-3) study which followed the participants an average of 4.6 years.

The study of 5,714 people from nine countries, particularly India and the Philippines, looked at the polypill alone compared to a placebo; aspirin alone versus a placebo, and the polypill plus aspirin versus a double placebo. The men in the study were 50 or older and the women were 55 or older.

Although the formulation of different polypills may vary, the polypill used in this study included 40 mg simvastatin; 100 mg of atenolol; 25mg of hydrochlorothiazide, and 10 mg of ramipril. It can be combined with 75 mg of aspirin a day.

“The next generation of polypills will likely have greater reductions in risk factors and so can be even more effective at cutting heart disease as the formulations of polypills improve,” said Yusuf.

Adds momentum for the polypill

The benefits of combined polypill plus aspirin in those who continued to take the medications without interruption were larger and their use was associated with a 40 per cent reduction in risk. Among those who took the polypill along with aspirin, 4.1 per cent experienced a serious cardiovascular event, compared to 5.8 per cent of those who had the double placebo.

Diana Tay, senior partner in innovations at Wellcome Trust said: “We are delighted by the findings from the TIPS-3 study, which was supported by Wellcome under our previous funding scheme Affordable Healthcare in India to test if the polypill could help reduce cardiovascular disease in at risk populations.

“We hope that the study findings will add momentum for the polypill to be used as a means to help prevent cardiovascular incidents which remain a significant cause of mortality globally.”

John Cairns, dean emeritus, Faculty of Medicine, University of British Columbia and a cardiology investigator, said: “We have recognized for a long time that primary prevention is important in cutting down heart attacks and strokes. These researchers have made a brilliant step ahead, with the factorial design testing the polypill with and without aspirin, and there is sufficient power in the study to know the results are very convincing, particularly about the use of the polypill along with aspirin.”

Gilles Dagenais, clinical investigator, Quebec Heart and Lung Institutes Research Centre; professor emeritus, Laval University, and an author of the study said: “The impact of the polypill with aspirin on cardiovascular risk reduction in the TIPS-3, and the low-cost of these combined medications, constitute a major addition in primary prevention to decrease the burden of cardiovascular disease.”

Michael Farkouh, professor and vice-chair, research of the Department of Medicine and Director of the Heart and Stroke Richard Lewar Centre of Excellence, both at the University of Toronto, said: “The polypill intervention addresses the challenges around adherence to our most effective primary preventive strategies. Frontline clinicians now have significant evidence to practically improve our delivery of care and save countless lives both in Canada and abroad.”

An illustration of the polypill and aspirin, and pictures of Drs. Salim Yusuf and Prem Pais are available at https://macdrive.mcmaster.ca/d/4f01476344be424db1ac/ . B-roll video of Dr. Yusuf speaking about the study will be added before the embargo lifts.

For more information or to arrange an interview, please contact: